With his first-place finish in the Netherlands' elections, Mark Rutte has effectively halted the right-wing populist Geert Wilders. German Chancellor Angela Merkel is among the European leaders welcoming the result.

Both the vote count tallies and the reactions poured in during the early hours of Thursday morning as politicians and individuals across Europe and the world took in the results of Wednesday's parliamentary election in the Netherlands.

In what many considered to be a bellwether election for the European Union, the center-right Rutte clearly defeated Wilders in what many saw as a symbolic victory against European populism.

Read: The Dutch election as it happened

With 54 percent of the vote counted, the projected results indicated Rutte scored a commanding victory, earning 33 out of the Dutch parliament's 150 seats. 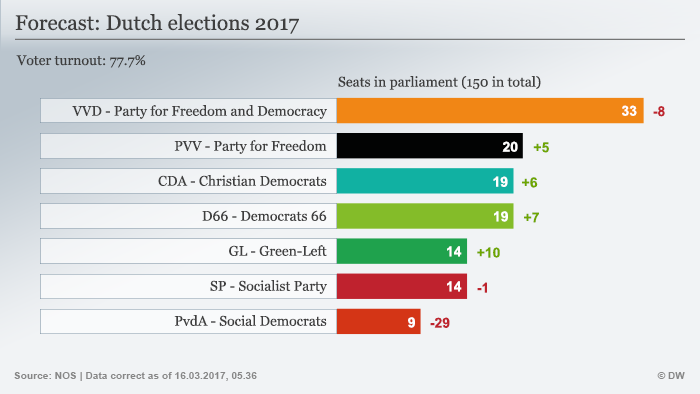 Many European leaders offered congratulatory messages to the acting Dutch prime minister, who will now stay on in office for a third term. But just as many chose to highlight Wilders' defeat, framing his party's second place finish with 20 seats - far below the 30-odd seats he had been predicted to win - as a resounding success for the unity and democratic values of a European Union battered by populism from both within and outside the bloc.

The response from Berlin

German Chancellor Angela Merkel phoned Rutte to offer her congratulations as well as her readiness to work with him and his new government, which he will now have to form with parliamentary alliances.

"The Netherlands are our partners, friends, neighbours. Therefore I was very happy that a high turnout led to a very pro-European result, a clear signal," Merkel told a conference on demography.

"And that after days in which the Netherlands had to tolerate accusations and reproaches from Turkey which are totally unacceptable... It was a good day for democracy."

Merkel faces her own electoral test in September when Germans will cast their votes for the national parliament. The head of government from the Christian Democratic Union (CDU) will seek to remain in office, though her primary rival and current coalition partner's candidate Martin Schulz has been polling neck and neck with her.

Schulz, a member of the Social Democratic Party, took to Twitter to celebrate Wilder's defeat. "I am relieved," the former EU parliamentarian wrote. "But we must continue to fight for an open and free Europe!"

Germany hosts its own populist party, the Alternative for Germany (AfD), whose success has been fed by the arrival of over a million refugees and migrants to Europe since 2015 and fears of terrorism linked to Islam. However, the party has been struggling in recent polls due to internal divisions.

France up next for elections

"The President of the Republic warmly congratulates Mark Rutte for his clear victory against extremism," Hollande said in a statement issued by his office. "The values of openness, respect for others and faith in the future of Europe are the only real response to the nationalist impulses and isolationism that are shaking the world,"

French Foreign Minister Jean-Marc Ayrault applauded the Dutch people for "stemming the rise of the far-right." His tweet also expressed "willingness to work for a stronger Europe."

France is the next country in Europe to confront its own right-wing populist movement in spring presidential elections. Polls currently show the National Front's Marine Le Pen winning the first-round of voting in April but falling short in the May run-off. However, a seemingly never-ending scandal that has engulfed conservative candidate Francois Fillon and a newly launched probe into travels undertaken by the political youngster Emmanuel Macron means the election's course remains wide open.

'A vote against extremists'

Like Merkel, EU Commission President Jean-Claude Junker called Rutte to congratulate him on the win.

"A vote for Europe, a vote against extremists," Juncker told Rutte over the phone, according to the EU politician's spokesperson.

The euroskeptic and anti-immigration Wilders had called for the Netherlands to exit the European Union, saying in a debate one day before the election that "Nexit" would be "the best thing that could happen" to the Dutch people.

The Italian Prime Minister Paolo Gentiloni similarly framed Wilders defeat as a win for pro-EU forces, writing on Twitter "No Nexit. The anti-EU right has lost the elections in the Netherlands."

Gentiloni will be one of the European leaders who will meet on March 25 in Rome to celebrate the 60th anniversary of the bloc's founding as the European Economic Community.

Perhaps the most straight-forward and succinct Tweet came from Scottish First Minister Nicola Sturgeon. In response to Rutte's victory and Wilders' defeat, the leader of the Scottish National party simply tweeted "Good."

Manfred Weber on Dutch results: 'A great day for Europe'