The tour guides say they're encouraging intercultural contacts. Their critics say they're helping normalize international relations with a murderous regime. 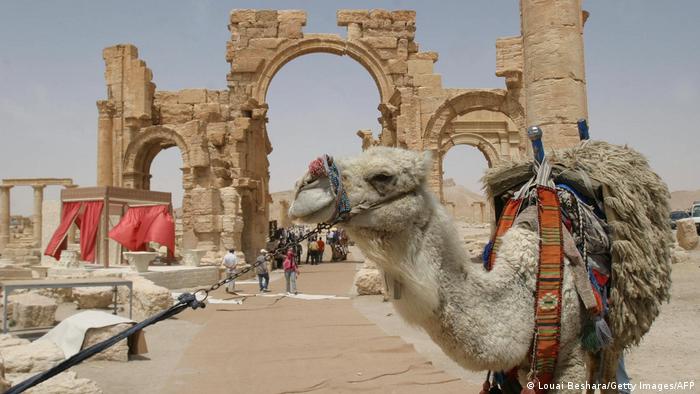 The historic Palmyra ruins, seen here in 2007, once drew many tourists

The destinations are exotic and appealing: Markets bristling with charming handicrafts, architecturally stunning houses of worship, ancient castles and striking landscapes. The only problem is they're all in Syria, a country still reeling from more than a decade of brutal civil war.

According to some European travel agencies though, that doesn't matter.

"Biblical cities, ancient cultures and mouth-watering delicacies," boasts the Berlin-based Soviet Tours, a company best known for travel in the former Soviet bloc that is offering trips to Syria in 2022.

"After years of being ravaged by civil war, Syria is slowly starting to return to a level of normality not seen in years," explained another Berlin-based company, Rocky Road Travel, on its website.

Of the Syria tours Rocky Road is pitching for next year, one is booked out already and more are being added "due to demand," the company's founder, Shane Horan, told DW. "People are definitely curious and they are clearly ready to see the country for themselves … regardless of headlines and rhetoric." 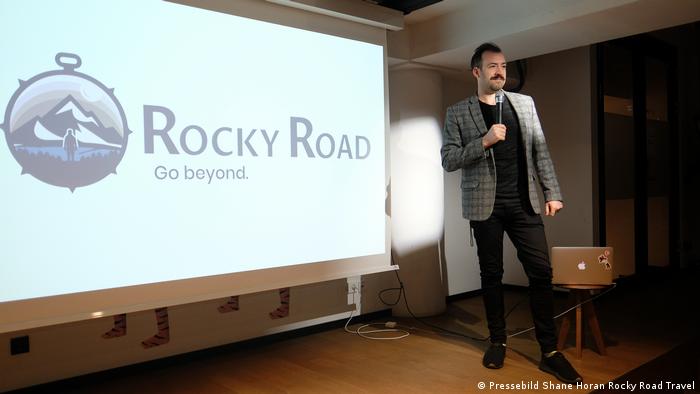 Shane Horan, founder of Rocky Road Travel, started his business in 2014 with trips to North Korea

These Berlin agencies are not alone. Over the past month, UK-based firm Lupine Travel has added tours to Syria in 2022. Another UK firm, Untamed Borders, is also advertising Syrian adventures.

Clio, a Paris-based business specializing in cultural tours, was likely one of the first European companies to start promoting Syrian trips in 2019. It, too, is offering tours again for 2022.

Tourist visas for Syria have been available for group travel since 2018, and a number of Chinese and Russian tour operators previously advertised trips there. Now China's Young Pioneer Tours, best known for taking visitors to North Korea, is also booking trips into Syria for early 2022.

Part of the reason for the current flurry of enthusiasm is the fact that, after a pandemic-related break of around 18 months, the Syrian government began issuing tourist visas again in early October.

And all this is happening despite travel alerts from Germany's Foreign Office. "There is a travel warning for Syria as well a requirement for Germans to exit the country," the Foreign Office told DW in a statement. "The German Embassy in Damascus is closed so it is impossible to provide consular assistance to German nationals in the country. Against this background, we cannot understand why [recreational] travel to Syria is being offered." 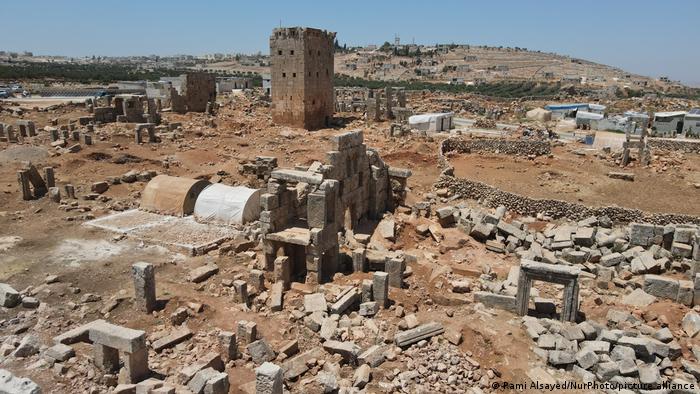 All of the trips begin in Beirut, Lebanon, because it's possible to fly there from Europe. After this, tour groups drive over the border into Syrian government-controlled areas, heading to Damascus, Aleppo, Homs and the Syrian seaside, before returning to Beirut. The agencies all stress they do not go near areas where there may still be fighting.

Which is why on their websites almost all of them also address topics like safety and special insurance, as well as the ethical considerations that would-be customers are certainly contemplating before booking. Almost all insist what they are doing is "not political."

"Generally we see travel as a form of cultural exchange," clarified Rocky Road's Horan, who started his business taking tourists into North Korea. "Like some of our other often vilified destinations, such as North Korea, we believe any sort of engagement, even short tourist visits, go a long way toward boosting cultural understanding." 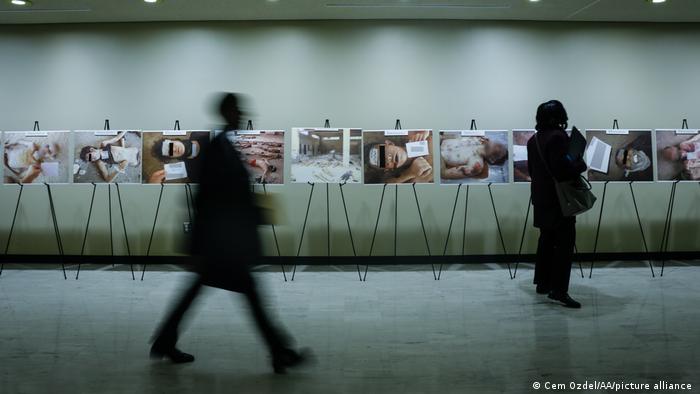 Soviet Tours offers similar logic on their website: "We strongly believe that down-to-earth human relationships are way more important than loud talks about politics and morality."

Unsurprisingly, groups like the Washington-based Syria Justice and Accountability Centre (SJAC) beg to differ. In a July 2021 update, they argued that the Syrian government, led by dictator Bashar Assad, is using the renewed push for tourism to do two things.

Firstly, the Syrian government wants to bring foreign currency into the country. They need this to trade with the rest of the world, but it is now mostly blocked by international sanctions.

"Since it is impossible for tourists to exchange their money for Syrian pounds outside of the country, the government can count on travelers to ferry money into the country," the SJAC wrote. So the danger is that tourism is "effectively funding Assad's military campaigns, including against civilians."

Tourism is also a valuable source of income. Before the civil war started in 2011, it made up as much as 10% of Syria's gross domestic product. According to World Bank statistics for 2010, the country had over 10 million visitors and international tourism worth about $6.3 billion.

Syrian officials began recording visitor numbers again in 2016. These have more than doubled in three years, going from around 1.04 million in 2016 to 2.42 million in 2019. It's hard to know how many of these visitors were Europeans, although it's clear the proportion isn't high. Even if each tour by the aforementioned agencies sells out and has between eight and 20 people per trip next year, for example, this wouldn't amount to more than about 400 people for all of 2022. 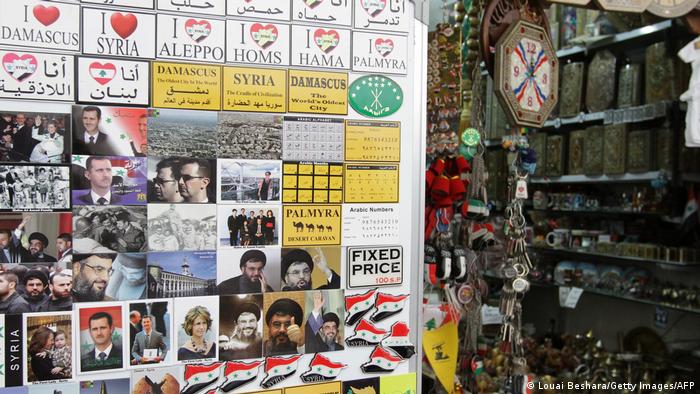 Tourism was a big business before the civil war in 2011, with souvenir shops like this one catering to tourists

Secondly, the SJAC wrote, the Syrian government is also using tourism to try and rehabilitate its international image.

German federal prosecutors have issued arrest warrants for high-ranking members of the Syrian government who have committed war crimes. International human rights organizations regularly condemn the Syrian government for bombing hospitals and schools, as well as the torture of hundreds of prisoners, starvation sieges of whole towns and the diversion of humanitarian aid. 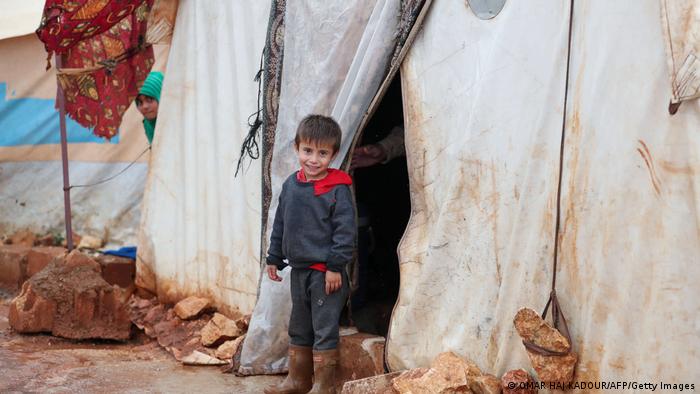 But tourists won't see any of that. "People who are considering spending their holidays in Syria should be aware they will only get a one-sided view of the situation in Syria," explained Nahla Osman, a lawyer who heads the board of the German Syrian Aid Association, an umbrella group representing over 20 different Syrian aid organizations in Europe.

To stay or go?

This is also why it's almost impossible to join one of these Syrian tours if you're a journalist or a human rights researcher (or Syrian). Berlin's Soviet Tours confirms this on their website: "Currently journalists are not allowed to join our tours in the country. This is a strict government directive we have to comply with."

If you travel in Syria independently, you risk arrest by Syrian security forces. To get there at all, you need to apply for a security clearance and be invited by a travel agent. The European travel operators help facilitate this process, which can take weeks. 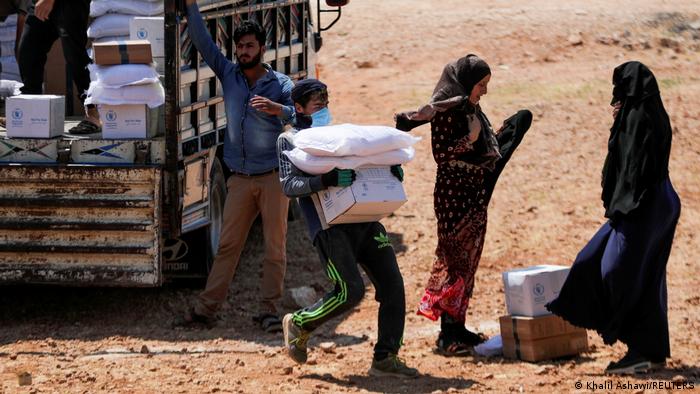 Tourists are allowed into Syria, but recent aid deliveries have been blocked

"It's never a black-and-white issue and if we limited travel to functioning democracies only, then many countries would fall off the list," said Miriam Putz, an expert at the Hamburg Foundation for Business Ethics, who co-authored a November 2020 study on ethical tourism. "But it is important to approach this kind of travel with open eyes. And I would assess the security situation in Syria as an extraordinary one."

As well-intentioned as some travelers might be, it's unlikely that European tourists taking selfies are going to help Syria very much, said Osman. "The only way to truly stabilize Syria is through a political process that looks to the future."

International donors have just hosted the fifth Brussels conference on "Supporting the future of Syria and the region." While intentions are good, these events are a mere band-aid to cover a wound, writes Lina Khatib.