Germany has pledged €1.74 billion in aid for the victims of the Syrian Civil War at a donor conference in Brussels. International donors pledged $6.4 billion in total, falling well short of a UN goal of $10 billion. 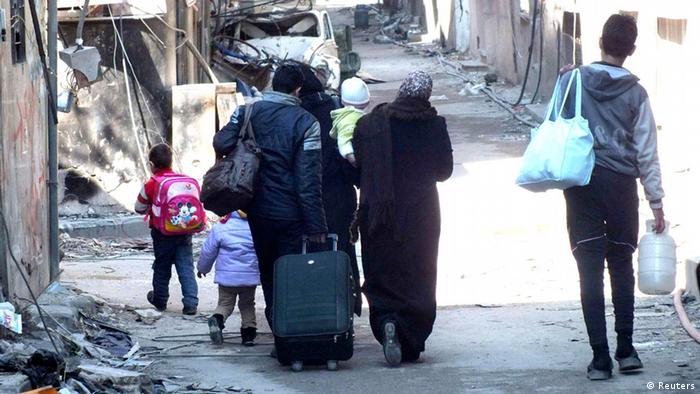 Germany pledged nearly €1.74 billion (almost $2 billion) to help to Syrians suffering as a result of the civil war, a decade after the conflict unfolded.

Representatives from more than 60 countries and organizations met in Brussels on Tuesday to agree on fresh aid.

The amount pledged by Germany is the country's largest allocation to Syria in four years. The EU's support, which is drawn from the bloc's common budget and is separate from its members, remained the same as last year, at €560 million.

The contributions will go towards food, medical aid and children's education. They will be distributed by aid organizations in Syria or nearby countries that have accepted large numbers of refugees.

'No substitute for sustainable peace'

In comments to the conference, German Foreign Minister Heiko Maas called for genuine peace negotiations, and "hope in a better future."

"Host countries in the region deserve more than just our gratitude, they need our full support and of course proper funding is crucial," he said. "Today Germany is therefore making its largest pledge in the last four years, €1.738 billion."

"The Syrian tragedy must not last another 10 years. Ending it begins by restoring hope. It begins with our commitments — here, today."

The German Foreign Office on Monday said Germany had pledged almost €1.6 billion ($1.88 billion) last year. The amount Germany finally paid was closer to €1.75 billion of the eventual €6.8 billion that went to Syria. Originally, donors had pledged some €4.4 billion overall.

Humanitarian organizations warn that the situation on the ground in Syria is deteriorating, urging a change in strategy when it comes to aid.

The EU has so far rejected distributing aid in areas controlled by President Bashar Assad's government. It has said it would only be ready to take this approach if there were tangible progress to a political solution.

However, German Catholic charity Caritas called for aid to include support for reconstruction projects in areas controlled by the government. Caritas President Peter Neher described the humanitarian situation in the country as "a disaster."

He said the previous focus on emergency aid should be abandoned.

"We have to allow targeted reconstruction measures, even in areas under the control of the regime," Neher told the DPA news agency.

Neher said it was important to rebuild destroyed infrastructure and drew attention to the fact that some 2.5 million children do not attend school.

"We want to help people, so they have a roof over their heads again," he said. "We want to rebuild kindergartens, schools and health facilities."

Demirel: 'EU should help with reconstruction in Syria'

With poverty is on the rise in Syria, Left party member of the European parliament Özlem Alev Demirel said Brussels should rethink its approach.

UN figures show that some 12.4 million people — almost 60% of the population — are suffering from hunger. The number of people who are unable to survive without food aid has doubled within a year.

Human Rights Watch has declared Syrian and Russian strikes against Idlib to be war crimes. The report blasts the strategic attacks on civilian targets as a "callous disregard" for life.