Over the past decade, hospitals across Syria have been attacked more than 400 times. Data obtained by DW suggests the attacks formed part of a larger strategy to cripple access to medical facilities in rebel-held areas. 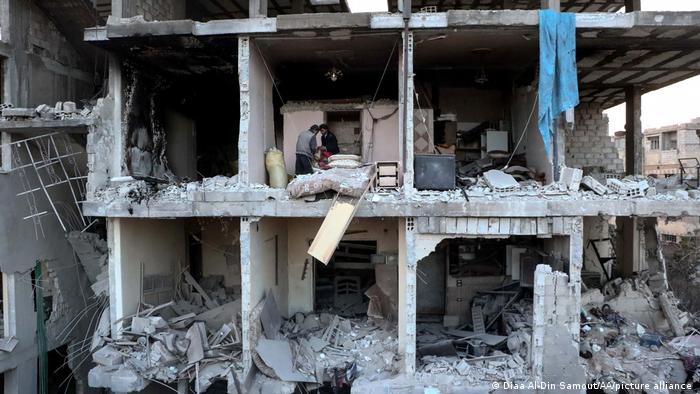 The Kafr Zita Cave Hospital was built nearly 20 meters (65 feet) into a mountainside in the hope of escaping aerial bombardment.

It was established in 2015 far from military facilities and residential areas north of the city of Hama, the fourth-largest city in Syria, in order to ensure continuity of medical services to civilians after the main hospital was destroyed.

Yet, the cave-dwelling medical facility was attacked several times in the following years until the rebels were pushed out of the area. 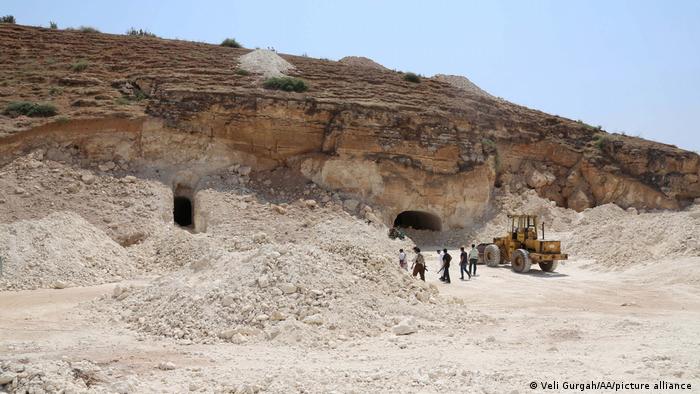 Earlier this month, the hospital was completely destroyed by Russian forces, with Russian media outlets saying it was to prevent its use by terrorists, a word often used by the regime to describe rebels.

But humanitarian groups, such as the Syrian Network for Human Rights, considered it an attempt to remove proof that the hospital had come under attack multiple times over the past six years.

"The Russian government aims … to erase the terrible consequences and evidence of the atrocities and crimes carried out by Russian forces in their barbaric bombing of this hospital," the group said in a statement.

But the Kafr Zita Cave Hospital isn't the only medical facility to have been attacked throughout the decadelong conflict in Syria.

Hospitals have been attacked more than 400 times over the past decade, according to data provided to DW by the Syrian Archive, an organization that aims to curate visual documentation of human rights violations in the Syrian conflict.

The Berlin-based group published a database on Tuesday suggesting that more than 90% of the documented attacks on hospitals had characteristics of deliberate targeting.

Furthermore, destroying medical facilities had formed part of a strategic campaign against rebel-held areas by the Syrian regime and Russian forces, according to the Syrian Archive. 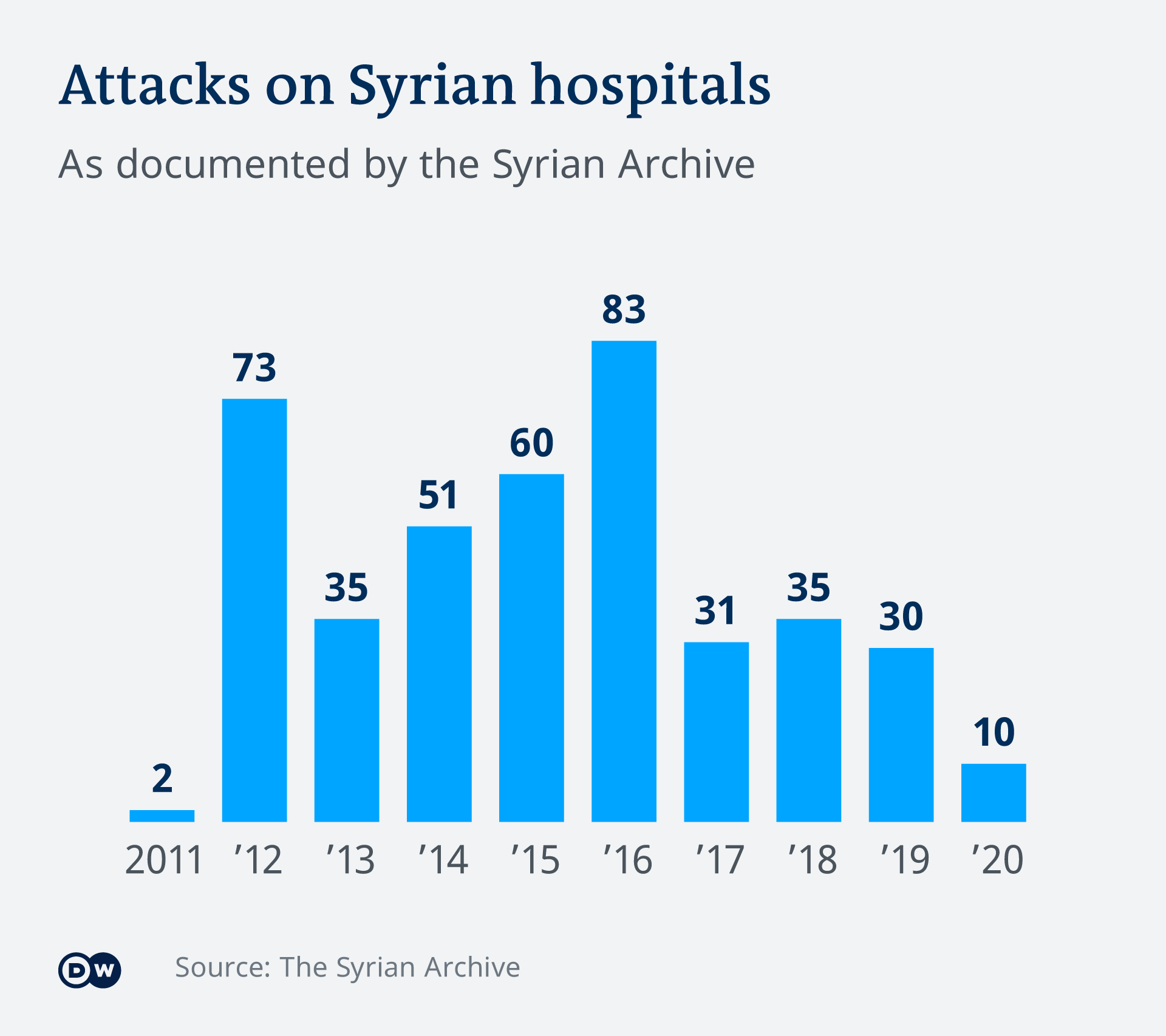 In its report, those parties were identified as the "predominant perpetrators" of such attacks, which included airstrikes, barrel bombs and shelling.

"This database is really important to make sure that we are showing the intentionality, impact and strategy of attacks against medical facilities," Hadi al Khatib, founder and director of the Syrian Archive, told DW.

The Russian Defense Ministry and the Syrian Embassy in Berlin did not respond to a request for comment prior to publication. However, Russian and Syrian authorities have consistently denied their involvement in such attacks.

Libby McAvoy, a legal fellow who worked on the project, noted that the data was intentionally organized with international law in mind.

For example, the database highlights information about the method of an attack by marking when a hospital was hit by a precision-guided missile or subject to a double-tap in which a strike is followed by another one minutes or even hours later.

At least 216 of the attacks were repeated strikes on medical facilities, amounting to nearly half of those documented. Data regarding repeated strikes could be used as an indicator of intentional targeting, which is considered a war crime under international law. 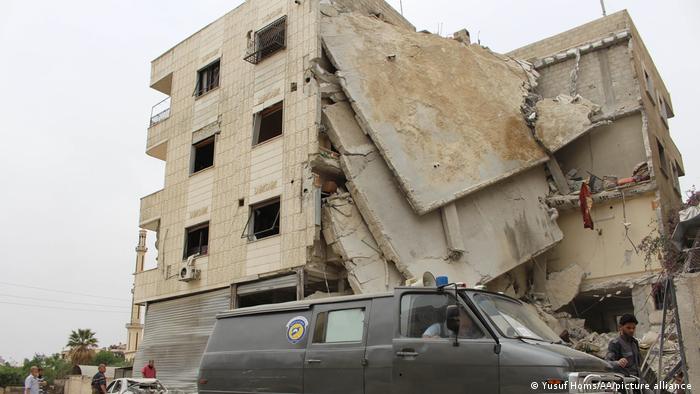 McAvoy hopes the material her and her colleagues have compiled may one day be used by legal teams and investigators to hold the perpetrators accountable.

But challenges remain. Although the data was organized for use in a legal setting, any attempts to hold perpetrators accountable would require more than just visual documentation.

Lives on the line

Observers believe that eventually the Syrian regime, backed by Russian forces, will turn its attention toward retaking Idlib province in northern Syria, considered the last bastion of rebel forces.

Al Khatib is concerned that Syrian and Russian forces will continue to target hospitals in a bid to deny medical access to opposition-held areas, especially in light of the archive's data, which suggests that hospitals are increasingly attacked during major battles.

"Whatever happens to Idlib in the future, medical facilities will be the first targets," he told DW. "And we would like to be able to show that in the hope of deterring it in the future."

A former member of the Syrian secret police has been sentenced to 4.5 years in prison for being an accomplice to crimes against humanity in his homeland. The trial in Koblenz is the first of its kind worldwide.