Aleppo hospitals out of service as Syrian regime intensifies assault

All hospitals in rebel-held eastern Aleppo have been put out of order by a Syrian regime offensive. Food, water and medical supplies for 250,000 civilians are running out. 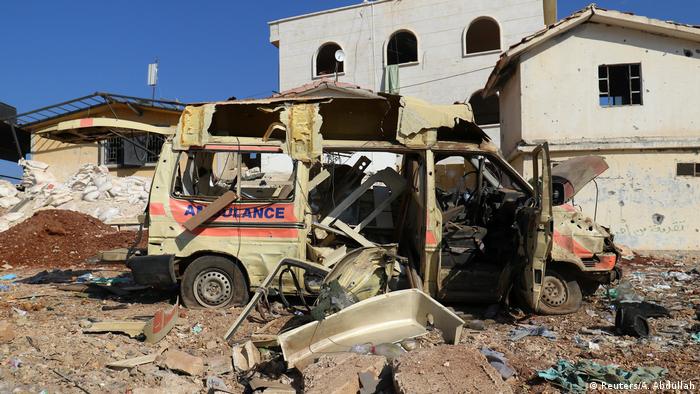 All hospitals in rebel-held eastern Aleppo are out of service as the Syrian government and allied forces fire artillery and drop bombs in a renewed offensive, the city's health directorate and a medical charity said.

The Omar Bin Abdul Aziz Hospital was destroyed by regime artillery fire on Friday, knocking out the last functioning hospital in eastern Aleppo, the Union of Syrian Medical Organizations (UOSSM) said. Four other hospitals, including a pediatric center, were also closed down on Friday after being hit by regime artillery, airstrikes and barrel bombs.

"This comes in light of the quickly deteriorating situation in eastern Aleppo as medical care and supplies are running extremely low," Dr. Ayham Al Zoebi of UOSSM said in a statement.

Medical charity Doctors Without Borders (MSF) confirmed that medical staff and patients had been killed in attacks and hospitals put out of order, including a children's hospital that was hit twice by airstrikes.

"The severity of the bombing has inflicted huge damage on the few hospitals working around the clock to provide medical care," said MSF emergency coordinator Teresa Sancristoval. "The attacks have destroyed entire hospitals, electric generators, emergency rooms and wards, forcing them to stop all medical activities."

The UK-based Syrian Observatory for Human Rights said some makeshift medical facilities were still operating but people were afraid to leave their homes. Rights groups and the opposition have repeatedly accused Syria and Russia of targeting medical facilities; charges they deny.

White House national security adviser Susan Rice called for an immediate end to "horrific attacks" on hospitals and medical workers, and urged Russia, Syria's ally, to help put an end to the violence. "The Syrian regime and its allies, Russia in particular, bears responsibly for the immediate and long term consequences these actions have caused in Syria and beyond," she said in a statement.

The UN warned on Friday that they had been unable to provide aid to eastern Aleppo for months, meaning that trapped civilians faced a "very bleak moment" with dwindling food and medical supplies, little clean water and winter fast approaching. The UN has blamed Syria, Russia and rebels for the fighting and for blocking humanitarian deliveries.

On Saturday, the UN condemned the surge in fighting and called for all parties to halt the violence and allow humanitarian aid into Aleppo and other parts of the country.

Speaking to the Berlin newspaper "Der Tagesspiegel" on Saturday, the head of international cooperation at the German Red Crescent, Christof Johnen, warned that the entire infrastructure of the city - from electricity to water and sewage - could collapse into a "fatal downward spiral."

The Syrian army, Iranian forces, Iraqi Shiite militia and Hezbollah launched a renewed offensive on Tuesday against eastern Aleppo, where some 250,000 civilians have been trapped since July, after regime-allied forces surrounded the rebel bastion.

Residents and monitors have described the offensive as one of the most intense since the city was divided between government and rebel forces in 2012. On Saturday alone, the White Helmets rescue group said 38 civilians had been killed after more than 250 airstrikes and 2,500 artillery rounds had targeted eastern Aleppo.

"It is a catastrophic day in besieged Aleppo with unprecedented bombardment with every type of weapon," a member of the White Helmets said in a video posted on the organization's Facebook page. The group has said they are struggling to conduct rescue operations given the scale of the bombing.

Up until this week, opposition-controlled areas of the city had experienced a period of relative respite since October 18, when Russia and Syria announced a series of unilateral ceasefires and Moscow said it would refrain from bombing the city.

Russia and Syria said the ceasefires were designed to allow residents to flee, but few left. An alliance of rebels and jihadists used the lull in fighting to launch an offensive on government-controlled western Aleppo, killing dozens of civilians before a regime counterattack pushed the rebels back.

The Russian and Iranian-backed Syrian regime aims to retake all of Aleppo, the country's largest city and commercial center before the war. Recapturing the city would deal a major blow to rebels and jihadist factions.

Russia, which intervened in Syria in September 2015 to support President Bashar al-Assad, has said its forces were not participating in the offensive against eastern Aleppo. Instead, the Russian defense ministry has said its warplanes and cruise missiles were targeting an alliance of rebels and jihadists in Idlib, Homs and northern Aleppo provinces.

Residents in Aleppo's eastern rebel-held region are being handed out the last remaining food rations, the UN says. The organization's aid convoys have been unable to access the area since July. (10.11.2016)