The leaders of Britain, France and Germany have pledged their support for the current nuclear deal with Iran. The issue is due to come to a head, again, in May when President Trump decides whether to maintain the treaty. 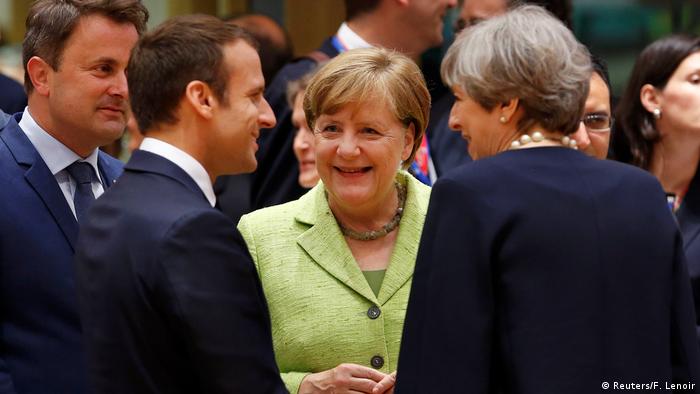 The leaders of Britain, France and Germany have said the existing nuclear deal with Tehran is "the best way of neutralizing the threat of a nuclear-armed Iran," according to a statement released Sunday by the prime minister's office in London.

Prime Minister Theresa May spoke by phone with French President Emmanuel Macron and German Chancellor Angela Merkel over the weekend, and the three leaders agreed that the best way forward was to maintain the existing agreement, signed in 2015.

But US President Donald Trump has repeatedly threatened to scupper the deal and his next chance to do so would be in May.

With an eye toward that, the European leaders also agreed to work towards achieving additional "important elements."

"Our priority as an international community remained preventing Iran from developing a nuclear weapon," said the statement from 10 Downing Street, referring to the three European leaders.

"They agreed that there were important elements that the deal does not cover but which we need to address — including ballistic missiles, what happens when the deal expires, and Iran's destabilizing regional activity," it continued.

"They committed to continue working closely together and with the US on how to tackle the range of challenges that Iran poses — including those issues that a new deal might cover."

The current deal, formally titled the Joint Comprehensive Plan of Action, was signed by the previous US president, Barack Obama, after prolonged multi-party negotiations involving the five permanent members of the UN Security Council — the US, Britain, France, Russia, China — and Germany, the European Union and Iran.

Both Merkel and Macron met with Trump in Washington this past week, seemingly working in tandem as they tried to persuade Trump to see the current deal as a stepping stone to a longer-term, broader accord, featuring a "four pillars" solution.

The first column is the current nuclear treaty with Iran. The others would target Tehran's nuclear activities after 2025, when so-called sunset clauses kick in, enhance global leverage against Iran's regional influence and try to curb its ballistic missile program.

US National Security Adviser John Bolton said Sunday that Trump had not yet made up his mind about whether or not to scrap the accord.

"He has made no decision on the nuclear deal, whether to stay in or get out," Bolton told Fox News.

Macron later spoke with Iranian President Hassan Rouhani and agreed to work together to preserve the deal, according to an Elysee statement.

They spoke for more than an hour, with Macron proposing the discussions be broadened to cover "three additional, indispensable subjects," his office said.

It referred to Tehran's ballistic missile programs, its nuclear activities beyond 2025 and "the main regional crises" in the Middle East.

"The nuclear deal or any other subject under its pretext is not negotiable in any way," Rouhani told Macron during the call. "Iran will not accept any restrictions beyond its commitments."