The German chancellor's meeting with Trump was cordial and warm, but there was little sign of progress on the Iran nuclear deal or EU exemptions from trade tariffs. DW takes a look at what the German press had to say. 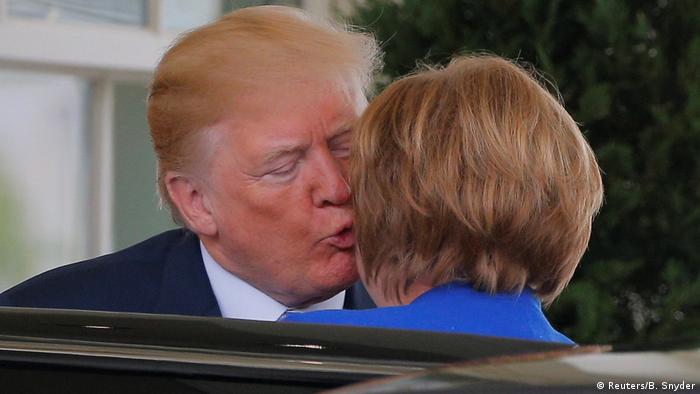 The two shook hands for the cameras and exchanged kisses on both cheeks at the start of the chancellor's visit to Washington on Friday. Both leaders also stressed the importance of ties between their countries at a press conference.

The Süddeutschezeitung called it a "refreshingly normal meeting," that was at least "accident free," even if it didn't result in any concrete progress.

"[Merkel] has already had worse experiences with Trump," Süddeutsche correspondent Thorsten Denkler in New York wrote, reminding readers that a year ago, in the same spot, Trump "ignored all requests to shake hands with Merkel."

"Trump is doing a lot this time around to make this visit look like a normal working meeting between two ordinary heads of government … In the whole madness of this presidency, that is a refreshing change."

On the agenda at the talks: the laboriously negotiated nuclear deal with Iran, which Trump has threatened to cancel on May 12, and an upcoming US decision on whether to extend an exemption for the EU on punitive tariffs on aluminum and steel. The president left both questions open.

Julian Heissler, Washington correspondent for Hamburg-based Die Zeit, stressed that although Trump extended "particular courtesy" to Merkel, he did not budge from his stance on Iran: "The ideas of the president and chancellor differ substantively on too many issues and nobody in Berlin anyway believes that Trump can be dissuaded from his convictions with arguments."

"The difficult times for the traditional US-European partnership are far from over."

The Süddeutsche noted, however, that Trump appeared to be more "moderate" in his use of language, opting not to reiterate his criticism that the Iran pact was the worst agreement ever made while still committing to preventing Tehran from developing nuclear weapons.

"This can be interpreted as a hint that he will actually leave the agreement," Der Spiegel wrote. The weekly news magazine also agreed that Trump struck an "unusually diplomatic" tone, particularly when broaching the subject of NATO partners — including Germany — failing to pay their share of 2 percent of GDP for defense. Trump avoided criticizing Merkel or Germany directly and doled out praise to countries like Poland for contributing more than the prescribed amount.

In the conservative Frankfurter Allgemeine Zeitung (FAZ), foreign affairs editor Klaus-Dieter Frankenberger wrote that Merkel's acknowledgement that the US was no longer willing to vouch for Europe's security made it clear that "Germany will increasingly have to help itself."

"What does all this mean for the unity of NATO and the future of the transatlantic relationship?" he asked. "For Trump it comes down to: no service without return. That's the new reality."

Germany's daily Bild tabloid assessed the meeting as a victory for Trump, who used the opportunity to "repeatedly celebrate" his role in peace talks between the leaders of North and South Korea. The paper's Washington correspondent, Ralf Schuler, concluded that it was therefore never going to be "a good day for him to negotiate concessions."

He added that Merkel's comment that "the president will decide" on punitive trade tariffs showed she had "no real leverage."

Many papers drew stark contrasts between Merkel's brief, business-like visit and French President Emmanuel Macron's charm offensive earlier in the week. During his three-day stay, Macron was honored with a state banquet and the opportunity to address both chambers of Congress.

Ultimately, as Die Welt politics correspondent Alan Posener put it, both Merkel and Macron "returned home empty handed" from meetings that were overshadowed by the talks between the two Koreas. Both "realized that Trump is determined to implement what he promised his constituents," he wrote.