European leaders wary of cutting off Russian oil and gas

Quickly cutting off energy revenues with oil and gas embargoes would hit Moscow where it hurts. But European leaders have argued for a phased approach, openly admitting their dependency on Russian energy supplies. 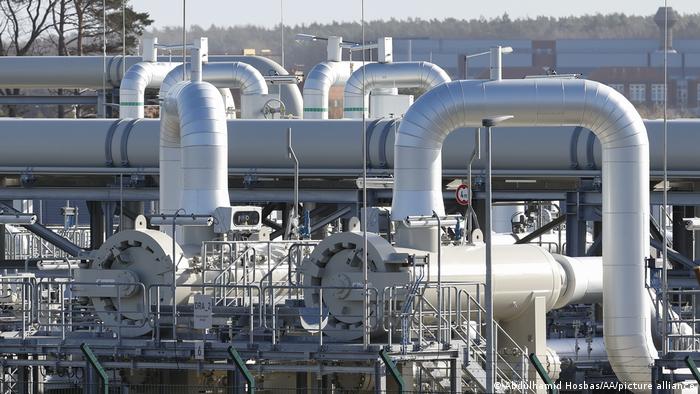 The leaders of Germany, the United Kingdom and the Netherlands on Monday said Europe was too dependent on Russian energy supplies to stop imports overnight as part of any eventual sanctions package in response to the invasion of Ukraine.

Energy exports are a key source of income for Russia, and there are growing calls for oil and gas embargoes to increase pressure on the Kremlin.

"Europe's supply with energy for heating, for mobility, power supply and for industry cannot at the moment be secured otherwise," Scholz said in a statement.

Russia is the largest supplier of natural gas to Germany, currently accounting for more than half of imports, according to the government. Gas accounts for around a fifth of German power production.

On Monday, British Prime Minister Boris Johnson said cutting dependency on Russian oil and gas was "the right thing to do," however it must be done in a "step by step" process.

"We have got to make sure we have substitute supply. One of the things we are looking at is the possibility of using more of our own hydrocarbons," Johnson told a press conference following talks with his Dutch and Canadian counterparts in London.

Canadian Prime Minister Justin Trudeau announced a halt to Russian oil imports last week. However, Canada is the world's fourth-largest oil producer and its imports from Russia were comparatively negligible.

Although the UK relies much less on Russian gas than other countries in Europe, Johnson said it was important that "everyone moves in the same direction."

"There are different dependencies in different countries, and we have to mindful of that," he said. "You can't simply close down the use of oil and gas overnight, even from Russia."

Dutch Prime Minister Mark Rutte told the press conference that weaning Europe off Russian energy would "take time" and it was a "painful reality" that Europeans were still "very much dependent" on Russian gas and oil.

EU looking for alternatives to Russia

Scholz added that Germany and its partners in the EU had been working "at full speed" for months to develop alternatives to Russian energy. "However, this cannot be done overnight," he said.

Last week, Germany said it would take steps to diversify its energy supply away from Russia, announcing a €1.5 billion ($1.6 billion) order for non-Russian liquefied natural gas and a possible slowdown of its exit from coal.

At a summit planned for Thursday in France, EU leaders are expected to declare a gradual "phaseout" of oil and gas imports from Russia. The European Commission is also expected to release a plan this week on reducing its dependence on Russian gas.

For the United States, Europe's gradual approach may be too slow.

Washington is pushing for a more immediate ban on Russian energy imports, although as a major producer of gas and oil, the US is far less dependent on Russian sources than Europe.

As US legislators discussed fast-tracking an oil embargo from Russia, US President Joe Biden held a video conference Monday with the leaders of Germany, France, Germany and the UK. The four European leaders only pledged to "continue raising the costs on Russia for its unprovoked and unjustified invasion," without specifying how.

'We must free ourselves from Russian energy'

Economy minister says Germany can do without Russian gas

Germany warns against ban on energy imports from Russia

Germany's economy minister says he regrets the country is still dependent on imports from Moscow, and that Europe's largest economy is already feeling the impact of sanctions imposed over Russia's invasion of Ukraine.

Oil and gas companies distance themselves from Russia