England have reached the final of the men's European championships for the first time courtesy of a 2-1 win against Denmark in extra time at the end of another spell-binding Euro 2020 fixture. 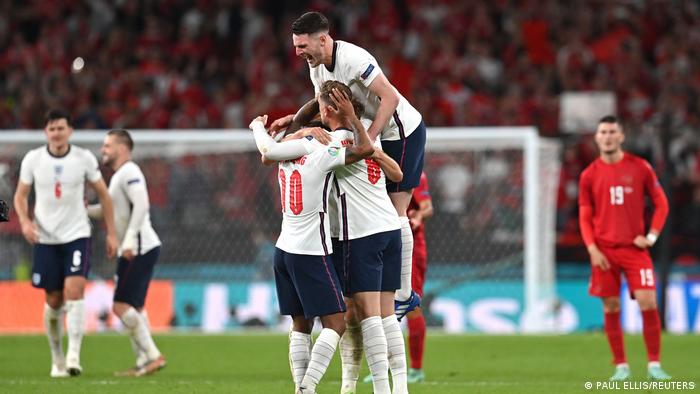 The belief never wavered and, come the final whistle, England's faith was rewarded. With 60,000 fans inside Wembley, it took an extra-time winner from Harry Kane to secure a 2-1 win over Denmark as the Three Lions reached the final of the men's European championship for the first time.

"It was a top performance," said Sterling after the game. "We had to dig in deep. It was the first time we conceded but we responded well and showed good spirit.

"It's another step in the right direction. We have to focus on the weekend now. It's step-by-step. We know what football means to this country. The energy, the atmosphere...It was top.

"Now we have Italy. We will celebrate a little bit then focus on Italy."

The Azzurri will provide the opposition on Sunday, but on Wednesday London was lit up after an emotional 120 minutes at Wembley.

Forced to come from behind

Denmark had taken the lead through Mikkel Damsgaard's stunning free kick, but it lasted just nine minutes when Bukayo Saka's low cross was turned into his own net by Simon Kjaer. It was the eleventh own goal of the Euros.

After a goalless second half, England secured a place in their first tournament final since 1966 in extra-time when Raheem Sterling was brought down in the box by Joakim Maehle.

Denmark keeper Kasper Schmeichel had provided the heroics throughout the 120 minutes and saved Kane's penalty, but the England captain pounced on the rebound to drive home the winner.

"Unbelievable - what a game though, credit to Denmark. We dug deep and we got there when it mattered. We reacted really well - we're in a final at home, what a feeling," Kane said after the game. "We know it's going to be a very tough game against Italy we've had a great tournament so far. One more game to go at home and we can't wait."

The belief that football is coming home has never been stronger.

Relive the action on Page 2...

Denmark look to continue their inspiring Euro 2020 run after the shocking collapse of Christian Eriksen. England, meanwhile, hope to reach their first final at a European championship. Follow DW for the latest.