Scotland’s European Championship got off the ground with a richly deserved point against arch-rivals England at Wembley. England remain unbeaten but continue to stagger their way through the tournament. 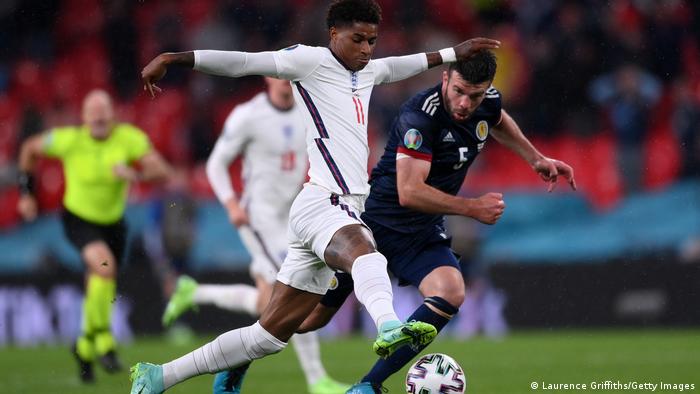 This was England's 17th goalless draw at a Euros or World Cup — two more than any other nation.

This was a gritty affair which, despite the score line, produced thrills and spills in this high tempo Battle of Britain. Despite Scotland still failing to have scored a goal in this tournament, there's no doubt they will be happier with the point than England.

The persistent rain created fitting conditions for this contest, in which Scotland were disciplined, committed and, with their ambitious two-striker formation, caused England problems. The closest they came was Lyndon Dyke's shot which seemed destined for the back of the net — but Reece James headed off the line. Stephen O'Donnell also went close, but was denied by Jordan Pickford's reflex save.

England had their chances too, with defender John Stones crashing an early header against the post – but it was a night when England's star striker Harry Kane drew another blank, suffering from a lack of support. One shot on target in front of their own fans is clearly not what England fans expect.

The absence of England's Borussia Dortmund star Jadon Sancho continues to confound though. The 21-year-old hasn't played a single minute in this tournament and, with England scoring just once in 180 minutes, the decision to keep one of the best winger's in Europe out of the team remains one of the most baffling coaching decisions of the tournament.

It would seem that England could also benefit from the energy and combativeness of Jude Bellingham, another Dortmund player, but he was also left out for this game. And with England favorite Jack Grealish also restricted to two cameo performances from the bench, there have been some perplexing decisions by coach Gareth Southgate.

However, Scotland's point was no less than they deserved and a reward for the thousands of Scottish fans that descended on London for this showpiece game. For the first time at Wembley, the oldest rivalry in football ended goalless.