Christian Eriksen collapsed during play, received CPR on field and was carried off on a stretcher after more than 15 minutes of treatment. His condition has since stabilized and both sides later played out the game. 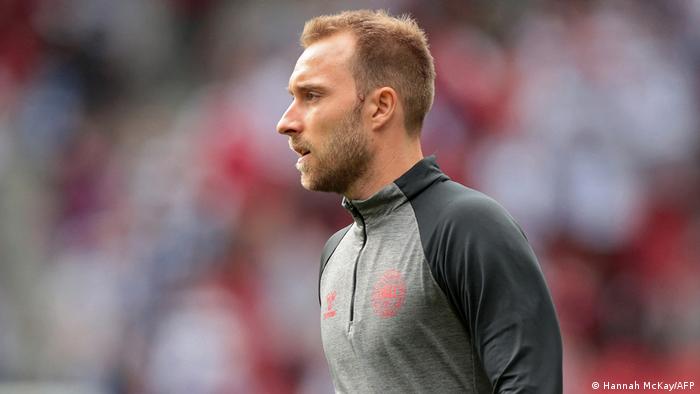 Denmark's midfielder Christian Eriksen was given CPR on field

The incident happened towards the end of the first half when the 29-year-old dropped to the ground after receiving a throw-in leading to a suspension of the Group B opener.

Medics from the Danish team then rushed onto the pitch to treat Eriksen, who currently plays for Italian side Inter Milan. They then performed CPR on the former Tottenham Hotspur midfielder as he lay on the field before teammates formed a protective circle around him.

Medical treatment continued on the pitch for more than 15 minutes, before Eriksen was carried off on a stretcher with several of his Danish teammates, and a number of fans, visibly distressed.

Both teams then left the field and returned to their dressing rooms. Euro 2020 organizers UEFA then confirmed that the match was initially "suspended due to a medical emergency" and later tweeted to say that Eriksen's condition had "stabilized."

The Danish football federation then said he was awake in hospital. "Christian Eriksen is awake and is undergoing further examinations at Rigshospitalet,'' it wrote on Twitter. The news was later relayed over the stadium loudspeaker and greeted with cheers by those in the stands.

The physician at Eriksen's club side, Piero Volpi, told press agency AP that his team were in contact with their Danish counterparts. Volpi said Eriksen never contracted COVID-19, has no medical conditions that he's aware of and has passed every medical exam without problem since joining the Italian champions in January 2020 from Tottenham.

Despite the difficult circumstances, both sides agreed to continue the game where it left off on Saturday evening, just a few hours after it was suspended at 0-0. A representative of the Danish football association said the players had spoken to Eriksen in the interim.

Union Berlin striker Joel Pohjanpalo scored the only goal of the match and Denmark missed a penalty as Finland claimed victory in their first ever game at a major tournament, though the contest was understandably muted.

"What the players did was unbelievable. I couldn't be more proud," Denmark coach Kasper Hjulmand said after the game. "The players are exhausted and emotionally drained. We had two options. To complete the match today or play tomorrow at noon. Everyone wanted to play today. There players were certain they couldn't sleep so it was better to say lets get it done now."

Eriksen was Denmark's leading scorer in the qualifiers for the tournament, netting five goals, and played against Germany in a friendly last week. Players, clubs and officials united in support of Eriksen, with UEFA president Aleksander Ceferin among those speaking up.

"Moments like this put everything in life into perspective," he said. "I wish Christian a full and speedy recovery and pray his family has strength and faith.

"At these times, the unity of the football family is so strong and he and his family carry with them the good wishes and prayers of everyone. I heard of fans of both teams chanting his name. Football is beautiful and Christian plays it beautifully."