Denmark's team doctor has confirmed that Christian Eriksen suffered a cardiac arrest against Finland on Saturday. He is in a stable condition in hospital, but there has been criticism of the decision to continue playing. 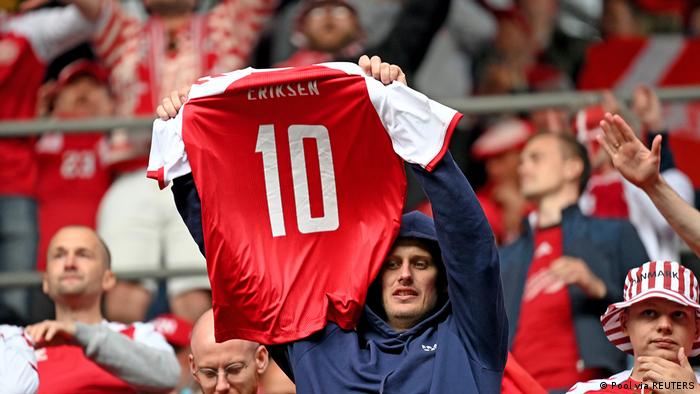 Danish footballer Christian Eriksen suffered a cardiac arrest against Finland on Saturday and "was gone" before being resuscitated on the pitch, according to Denmark's team doctor, Morten Boesen.

"We started the resuscitation and we managed to do it," he said. "How close were we to losing him? I don't know, but we got him back after one defibrillation, so that’s quite fast. The time from when it happens until he receives help is the most important factor. And that was a short period of time. That was decisive.

"They are now doing a series of tests at the hospital that can maybe give some of the answers him and I are looking for. But he is awake and is answering questions clearly. His heart is beating again. The tests that have been done so far look fine.

"We don't have an explanation to why it happened."

What happened to Eriksen?

Midfielder Eriksen, 29, fell face-first onto the turf 42 minutes into the Group B fixture and remained motionless after going to receive a thrown-in near the corner flag.

Medics were immediately called onto the pitch and performed CPR while his teammates shielded him from view in moving and distressing scenes. The Inter Milan player was then taken to the nearby Rigshospitalet hospital for treatment.

Euro 2020 organizers UEFA was initially suspended the match before resuming play at 20:30 local time after Eriksen, by this point stable in hospital, had encouraged his teammates to play on via Facetime.

Denmark went on to lose 1-0 as Finland marked their first-ever match at a European Championships with a famous win, but it was overshadowed by the near-tragedy which befell Eriksen.

Speaking at a press conference on Sunday, Denmark coach Kasper Hjulmand said that he and the squad had spoken to Eriksen and that it was great "to see him smile." But he said that Eriksen had little recollection of the incident.

"Christian was concerned about us and he doesn't remember a lot about yesterday, so he asked how the team was doing," reported Hjulmand. "Christian is a big person. He said this morning that we maybe had it worse than him because he wants to get out on the training pitch again. We have to see if we can gather ourselves and go out and play for Christian."

Criticism of decision to continue

Despite Eriksen's insistence that the match should continue in his absence and his teammates' willingness to oblige,the decision to allow the game to continue has drawn criticism.

"I respect that our team and also the Finns managed to play on. But when something like this happens, they are full of emotions and don't have the overview to make important decisions," said Denmark legend Michael Laudrup. "I think it's wrong to have to make a decision so soon after an emotional event."

Coach Hjulmand said UEFA put "no pressure" on the players to continue, however only offered two options: play that evening, or play on Sunday at midday. "No, we should not have played," he added on Sunday. "We will try tomorrow to establish normality as much as possible."

"I don't think the right decision was to play the game," concurred team doctor Boesen. "We had help from a psychological point of view at the hotel last night. Everyone expressed their feelings and how they saw the situation, and everyone was pleased we did this and talked it through."

Goalkeeper Kasper Schmeichel, who subsequently fumbled Joel Pohjanpolo's header for Finland's decisive goal, told the BBC that UEFA's two options were "ridiculous" and that he "couldn't understand" them.

UEFA referred to Article 29 of its own statues which states: "If a match cannot be started or completed, the whole match or the remaining time should be played on the next day." The statutes don't refer to emergencies such as that in Copenhagen.

In Germany, while the current Germany squad and coaching staff conveyed a message of support to Eriksen, German 2014 World Cup winners Christoph Kramer and Per Mertesacker also criticized the decision to continue.

"In my opinion, the error lies with UEFA who have to say: we have a different view and we won't be playing on today. I don't know how anyone can have another opinion," said Kramer in his role as a pundit on public broadcaster ZDF. Kramer himself suffered a serious concussion during the 2014 World Cup final and had to be substituted after asking the referee if it was really the World Cup final.

"The question is: can any of them [Eriksen's teammates] think properly in such a moment? I say: no. Today simply wasn't about football. I think would have been better to process the emotions, sleep on it for a night, and then you can always play tomorrow."

On Sunday lunchtime, Germany defender Antonio Rüdiger added: "I personally would not have been able to continue playing."

Messages of support for Eriksen

"We would like to thank everyone for the heartfelt greetings to Christian Eriksen from fans, the Royal Families from both Denmark and England, international associations, clubs, etc.," continued the statement from the DBU.

"We encourage everyone to send their greetings to the Danish FA, where we will make sure they are all passed on to Christian and his family."

Also on Sunday, the Germany team doctor Tim Meyer told a press conference that, based on what he saw and the information he has received, Eriksen "clearly suffered from an acute cardiac issue - a disruption to the heart's rhythm which results in a shortage of oxygen reaching the brain."

Meyer, who has worked with the German national team since 2001 and is also the head of the German Football League's coronavirus hygiene task force, elaborated on the steps which football teams follow in such cases.

"Firstly, we examine our players regularly for underlying health issues. The DFB does this comprehensively and I presume that the Danish FA does too. The Italian FA is considered particularly advanced in this regard and their recommendations have been implemented on a European level.

"Secondly, when such cases occur, it is vital that those involved are able to take the right steps. Doctors and trained medical personnel are on standby. We always have two defibrillators, in case one fails. The chain of command and communication is clearly defined and works well."

Asked whether the problem suffered by Eriksen will lead to a rethink within the Germany set-up, Meyer said: "No, I personally don't think the DFB need take further action. We can never completely rule out these cases but we are well prepared. In fact, you could say we do too much. We consider the official recommendations as basic requirements, and we do even more."

And asked whether he considers it medically conceivable that Eriksen was in a clear state of mind to communicate his desire for his teammates to continue playing, he responded: "Yes, that is conceivable."

Finally, Meyer stated: "This has nothing to do with the pandemic or any coronavirus vaccines."

Christian Eriksen collapsed during play, received CPR on field and was carried off on a stretcher after more than 15 minutes of treatment. His condition has since stabilized and both sides later played out the game.