Opinion: UEFA's 'play on' decision after Eriksen collapse was so very wrong

"Moments like this put everything in life into perspective," said Aleksander Ceferin. What a crock from the head of UEFA, writes Kyle McKinnon, after Christian Eriksen received CPR on the pitch and the Euros played on. 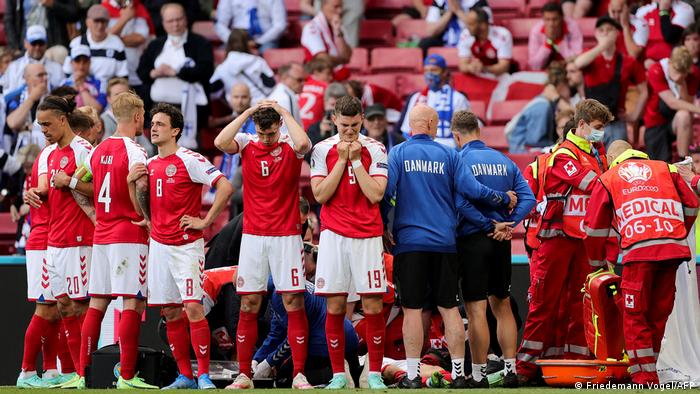 Before the suspended Denmark vs. Finland match could resume, the fourth official had to formally indicate on a lit board that Denmark's number 24, Mathias Jensen, would be entering the pitch as a substitute for number 10, Christian Eriksen.

Jensen jogged onto the pitch before the restart. Usually the player being replaced then jogs off.

Eriksen, after apparently receiving life-saving CPR, had been stretchered off the field to massive applause from both Denmark and Finland fans. Eriksen's teammates had formed a protective ring around their captain, tears streaming down their faces. All that was about 70 minutes before the restart.

The fans, unsure whether they had witnessed a fatal medical event on the pitch, mostly stayed in their seats. The Finnish fans shouted "Christian" at one point, followed by the Danes shouting "Eriksen" in a moving, repeated tribute. 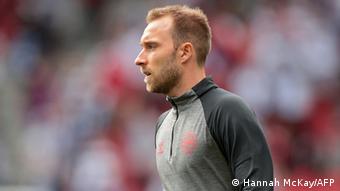 Denmark's midfielder Christian Eriksen warmed up before the Finland match

It's hard to say whether most seriously considered the match would continue on Saturday night. From what they had seen to that point, a player's life was in the balance. It was a draining, traumatic experience simply watching on television. At least one German studio analyst on network ZDF was visibly in tears.

"Honestly, there were players out there that were completely done," said Denmark coach Kasper Hjulmand, who needed long pauses to remain composed afterward.

The logistical question that came to mind for many was how to move the remainder of this match in Copenhagen — and perhaps the following match Saturday evening, Belgium versus Russia in St. Petersburg — into Sunday or Monday. And what then to do with the scheduled Sunday matches.

"Moments like this put everything in life into perspective," UEFA President Aleksander Ceferin said by way of a UEFA statement.

But it wasn't enough to do the right thing

It was a simple decision to make for a true leader in a leadership position.

The right thing was to push the tournament back after what so many, especially the Denmark team, had witnessed and felt. No matter if, as UEFA said, the players actually made a "request" that the game be resumed. It should have been pushed to another day.

The right thing is the right thing. Logistics be damned — including hotel rooms, flights, tickets, stadium security. No one with an ounce of feeling would begrudge the right decision in this case.

There is no fudging what's right after you write — allow me to repeat Ceferin's line — "Moments like this put everything in life into perspective."

And there was room to do it

After UEFA's financially-influenced, full-court press to keep the delayed Euro 2020 event on track with fans in the stands, it built into its 31-day tournament schedule a buffer to move games by a day or two, mainly because of COVID-19. UEFA should have used it.

Were Denmark affected by all that occurred when their match against underdog Finland was suspended? Of course they were. And not because Eriksen is their best player.

Denmark coach Hjulmand said his guys were "emotionally done and emotionally exhausted." Finland were affected as well, of course. And while it may be nice, for football's sake, to see a team, Finland, in its first-ever major tournament defeat a much-higher ranked team, it was wrong for the game to proceed without a day of respect for a player and a shocking moment on the pitch that, from all indications, could have been tragic.

Truly, moments like this put everything in life into perspective.

Fans in shock after Eriksen collapses

Denmark's team doctor has confirmed that Christian Eriksen suffered a cardiac arrest against Finland on Saturday. He is in a stable condition in hospital, but there has been criticism of the decision to continue playing.

Italy got their Euro 2020 campaign off to a winning start in Rome on Friday, but the city is still struggling to get enthusiastic about the tournament after a difficult year. DW's Alima Hotakie sampled the atmosphere.