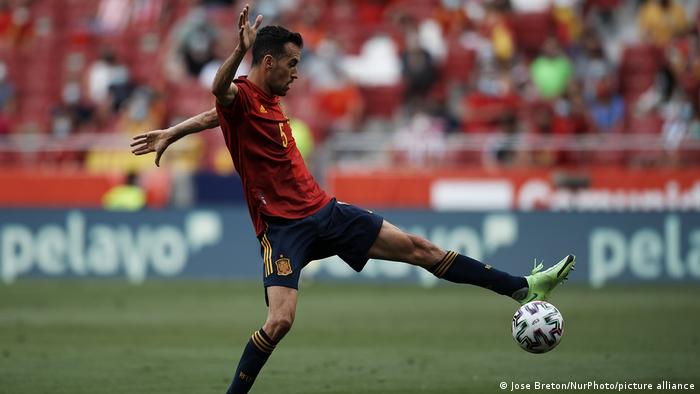 In the days before the start of a major international tournament, talk is usually focused on surprise selections, tactical tweaks, injury doubts and fierce rivalries. Those discussions remain, but the delayed opening of Euro 2020 on Friday has minds turning to travel rules, quarantines, bubbles and testing.

Spain captain Sergio Busquets had to return home to a period of isolation after testing positive for COVID-19 last weekend. Though it was later found that the virus had not spread to other players, Spain were forced to call up several players to act as coronavirus reserves in a separate bubble from the main squad.

The positive test also meant Spain fielded an under-21 side, coached by under-21s boss Luis de la Fuente, in the senior team's final warmup match against Lithunia on Tuesday. The 2012 winners may have won 4-0 but none of their Euro 2020 squad took to the field. Sweden have faced similar problems after positive cases in their squad while six Scotland players missed their friendly against the Netherlands last week after a positive test for John Fleck.

Though some football associations, including Spain's, are trying to secure vaccines for their players ahead of the tournament, it seems certain that disruptions to squads will be a feature of Euro 2020. Players who test positive during the tournament will have to isolate in the same way that Fleck, Busquets and others have done.

Tournament organizers UEFA have said that matches "will go ahead as scheduled as long as the team has at least 13 players available (including at least one goalkeeper)." UEFA has also allowed squads to be expanded from the usual 23 to 26 players and increased substitutions to five, with an additional one in the case of extra time. Countries can also call up additional players in the event of an outbreak but must remove the same amount of players from the tournament squad to do so.

There is also provision for matches to be rescheduled "within 48 hours" if teams don't have 13 players available at a venue of UEFA's choosing, with any team unable to field a side after that forfeiting the match 3-0. Given quarantine requirements, travel restrictions and the frequency of testing, walkover wins or second string squads remain a distinct possibility. Given the positive tests in the Spain and Sweden camps, their clash in Seville on Monday could be the first real test of the new regulations.

The threat of late notice relocation of matches, due to outbreaks in squads or the wider population, is bound to be of concern to fans whose plans to follow their teams have been made chaotic not just by the pandemic but by UEFA's decision to hold games in 11 stadiums spread across the continent.

As it stands, the Puskas Arena in Budapest is the only stadium set to operate at full capacity. Arenas in Baku and St. Petersburg will be at 50% and the rest, like Wembley (minimum 25% of capacity) and the Allianz Arena in Munich (22% capacity), will be around a quarter full.

But, like everything else, these numbers could change with restrictions eased and tightened on a daily basis across Europe. Hopes for a full house in London for the July 11 final were raised by UK government policy to ease almost all restrictions by June 21 but the rise of the Delta variant has put that in significant doubt.

With many ticket holders having already returned their tickets, only the vaccinated, brave, fortunate and financially stable have any hope of following their team in the way that's been such a feature of past tournaments. Even if they do make it, there's every chance some of the best players will not.

A year after Euro 2020 was postponed, the plan for the rearranged tournament remains unclear. UEFA appear to be demanding fans in stadiums in multiple cities, but is that possible? The hosts themselves are not so sure.

Football fans across Europe are turning their attention to the rearranged Euro 2020, set to start in June. But with travel restrictions, stadium capacities and ticket allocations still unclear, the excitement is limited.