EU, US threaten Russia with new round of sanctions over Ukraine

France, Germany and the US have threatened Russia with additional sanctions if it does not take "immediate steps" to end the violence in Ukraine's east. Earlier, Kyiv declared a week-long cease-fire with the rebels. 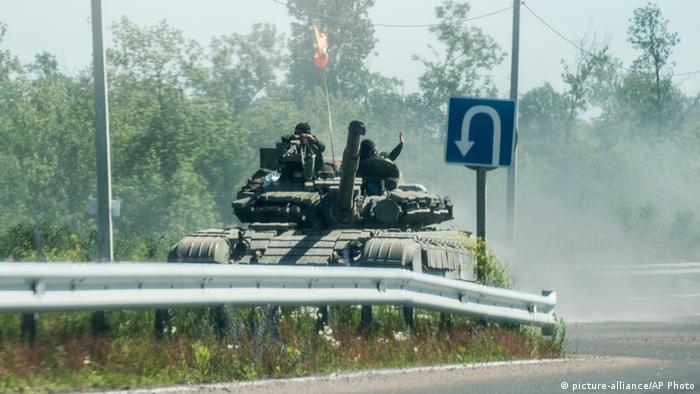 The leaders of France, Germany and the United States agreed on Friday to impose additional sanctions against Russia, if the Kremlin does not pull back its troops from Ukraine's border and try to convince pro-Moscow separatists to lay down their arms.

"They agreed that should Russia fail to take immediate, concrete steps to de-escalate the situation in eastern Ukraine, the United States and the European Union would coordinate additional steps to impose costs on Russia," the White House said in a news release.

But the leader of the separatist Luhansk People's Republic in eastern Ukraine rejected the proposed pause in fighting, according to the Interfax-Ukraine news agency.

"No one will lay down their arms until a full troop withdrawal from our land," Valeriy Bolotov said.

The Kremlin criticized the cease-fire, saying that "this is not an invitation to peace and negotiations, but an ultimatum to militias in the southeast of Ukraine to lay down their arms."

US accuses Russia of arms deliveries

The US State Department accused Moscow on Friday of readying tanks and artillery pieces for delivery to pro-Russian separatists in eastern Ukraine.

"We also have information that Russia has accumulated artillery at a deployment site in southwest Russia, including a type of artillery utilized by Ukrainian forces but no longer in Russia's active forces," said State Department spokeswoman Jen Psaki.

She added that "Russia may soon provide this equipment to separatist fighters." Earlier in the month, both Ukrainian and US officials accused Moscow of delivering surplus T-64 tanks and BM-21 multiple-rocket launchers to the pro-Russian separatists.

The Kremlin said that the troop movement was routine and NATO member states had been informed beforehand.

But State Department spokeswoman Psaki said on Friday that "this is the closest Russian troops have come to the Ukrainian territory since their invasion of Crimea." Moscow annexed the Black Sea peninsula last March.