Russian tanks, heavy weaponry and rocket launchers have been sent to Ukraine in recent days. The US State Department confirmed the armory is now in the hands of the separatists in the east of the country. 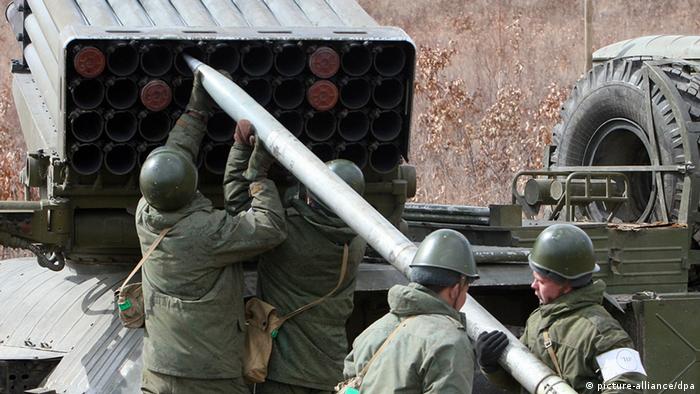 Confirmation by the US of reports that a convoy of armored vehicles, including three T-64 Russian tanks, crossed the border into Ukraine will likely deepen already strained relations with Moscow.

A convoy of three T-64 tanks, along with several MB-21 "or Grad" rocket launchers (pictured) and other armored vehicles had crossed from Russia into the Ukrainian towns of Snizhne, Torez, and Makiyivka over the past three days, she said.

The tanks are of a type no longer used by Russian forces.

She added that multiple rocket launchers, at the same deployment site in southwest Russia, had been seen being transported through the Ukrainian city of Luhansk.

"This is unacceptable," Harf added. "A failure by Russia to deescalate the situation will lead to additional costs."

The US, and its European allies have threatened greater sanctions against Moscow unless its stops assisting separatists in eastern Ukraine.

"Russia will claim these tanks were taken from Ukrainian forces, but no Ukrainian tank unit has been operating in that area. We are confident these tanks came from Russia," Harf said.

Rebel leaders confirmed on Friday they had obtained three tanks.

Denis Pushilin, a leader of the separatist Donetsk People's Republic, told Russian state television Friday they had the tanks, but "it was improper to ask" where and when they had obtained them.

"They are in Donetsk and are the minimum we have to defend the city," he said.

Rasmussen further urged Russia "to complete the withdrawal of its military forces on the border with Ukraine, to stop the flow of weapons and fighters across the border, and to exercise its influence among armed separatists to lay down their weapons and renounce violence."

Russia has not directly commented on the allegations, but in response, accused the Ukrainian military of violating its borders with at least one armored vehicle.

Friday's claims are the first time Russia has accused Kyiv of violating the border since fighting broke out in eastern Ukraine between pro-Russia separatists and Ukrainian government forces.

"We cannot confirm whether this incident occurred, but we call on Russia to remove its irregular fighters, arms and military forces from Ukraine, including from Russia-occupied Crimea," an unnamed State Department official told the Associated Press news agency.

Fleeing from home in Ukraine

Fighting has continued this week in eastern Ukraine with reports of Russian tanks moving into Ukrainian territory. The continued unrest is displacing more and more people west as they flee enforced conscription. (13.06.2014)

'Russia and Ukraine need to talk,' Mikhail Khordorkovsky says in an interview with DW. He said the conflict is not only extremely difficult and dangerous for Ukraine - but also for Russian President Putin. (13.06.2014)