The EU Commission is suing Poland at the European Court of Justice for its decision to force judges to retire. Poland breached fundamental EU values in doing so, the EU says. 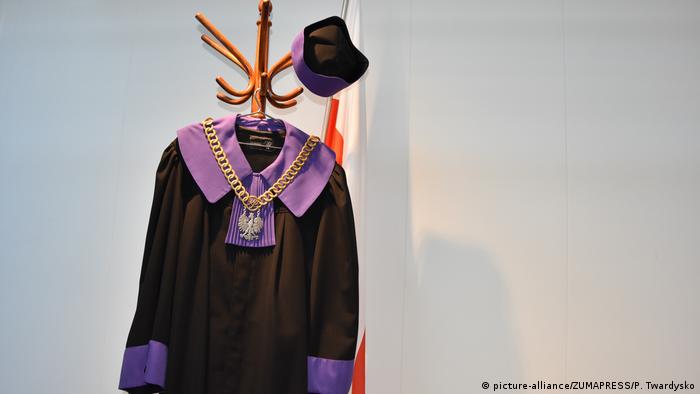 The European Commission issued a statement on Monday saying Poland's law on the Supreme Court, which lowers the retirement age of judges to 70 from 65, effectively forcing 27 of the 72 sitting judges into retirement, was "incompatible with EU law as it undermines the principle of judicial independence."

It goes on to say that Poland does not "fulfil its obligations" of the "Charter of Fundamental Rights of the European Union."

The EU's executive sees Poland's judicial reforms as detrimental to the EU's legal order, "creating a risk of serious and irreparable damage to judicial independence in Poland."

In July 2017, the Commission launched an infringement procedure on the "Polish Law on Ordinary Courts," which Poland's ruling right-wing PiS party says is crucial to reform regulation that dates back to communist rule and therefore needs to be overhauled. The EU says Warsaw has failed to respond in an adequate way, despite several warnings.

The new law led to mass protests in Poland over the summer as people fear that the government now has free reign to handpick judges.

The EU is at loggerheads with Warsaw over several issues, which also led it to trigger Article 7 of the Lisbon Treaty last December, after two years of talks. Article 7 aims to prevent member states from breaching "the common values of the EU."

In September, the EU also triggered Article 7 on Hungary, another EU member state led by a populist, right-wing government.

For Hungary and Poland, the Article 7 vote could mean they lose their voting rights as well as EU subsidies, which will have to be negotiated in upcoming EU budget talks.

Leading Polish intellectuals, including a former president, are speaking out against the country's judicial reforms. Fearing Poland's democracy is at stake, they have urged the European Court of Justice to intervene. (11.06.2018)

Amnesty International has called on Warsaw to "protect the right" to freedom of assembly. Judges have warned of mounting pressure to back authorities, saying "it is very difficult to work in these conditions." (25.06.2018)