EU chief Juncker last week grandly promised US President Trump that Europe would buy more US soybeans and gas. In return the US would step back on car tariffs. But is the EU offering anything more than today's reality?

European Commission figures released this week showed that 37 percent of the EU's soybean imports in June came from the US, compared with 9 percent in July 2017.

It sounds impressive and while the EU has traditionally been the second-biggest buyer of US soyabeans, it remains a distant second to China, which bought $12.3 billion (€10.2 billion) of US soybeans in 2017 compared with $1.6 billion exported to the EU.

Furthermore, one month does not a summer make.

"Possibly as soon as late next month we expect China to resume purchases of US soybeans although less than in previous years," Michael Magdovitz, an oilseeds analyst at Rabobank International, told DW. 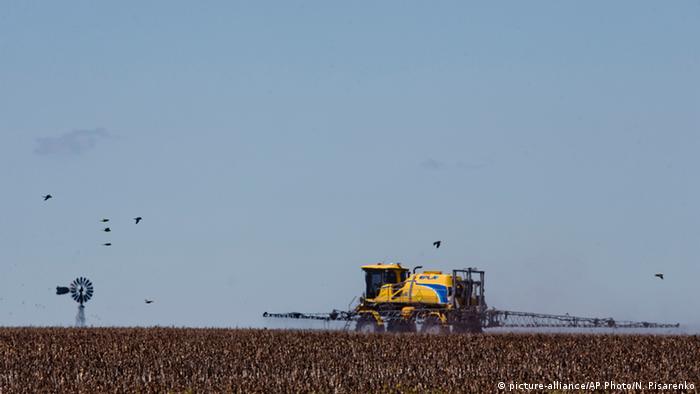 The EU heralded the rise as "the first concrete follow-up to the EU-US joint statement agreed in Washington between European Commission President Jean-Claude Juncker and US President Donald Trump."

Trump and Juncker agreed on July 25 to start talks intended to achieve "zero tariffs" and "zero subsidies" on non-automotive industrial goods and in return, the EU agreed to buy more US soybeans and import liquefied natural gas from the US .

Phil Hogan, European commissioner for agriculture, said this week: "We expressed our willingness to import more soybeans from the US and this is already happening. European and American farmers have much to gain by working together."

Juncker achieved his key goal of avoiding new tariffs on the European automotive industry that could further escalate the trade dispute between the EU and US. He also gets a good deal for European importers who are paying less for soybeans as American prices fall.

US soybean farmers brace for loss of main market

US soybean futures have fallen 20 percent since China announced the 25 percent tariff on 106 US products, including soybeans, in early April.

Soybeans have been the second largest US export to China (about $15 billion annually) providing a key protein feed for China's pork industry.

Trump, meanwhile, had a piece of news he could sell to rural voters, many of whom supported him in the 2016 presidential election. Trump is in Iowa, the second biggest soybean producing state, on Thursday, two months before crucial mid-term elections. He has already promised $12 billion in aid to help farmers suffering from low commodity prices.

The head of the American Soybean Association, Ryan Findlay, said in July that China's retaliatory tariffs had already hit farmers by lowering already low prices. "Farmers see that pain right now," Findlay said in an interview on CNBC. But, he added, farmers are still supportive of Trump's position.

Meanwhile, back in the EU, buyers are largely responding as rational agents do to a big drop in US prices after China slashed its purchases of American soybeans — and Juncker knew this.

"The winners of this trade war are non-Chinese buyers of soybeans like the EU, which can buy discounted US soybeans," Magdovitz said. 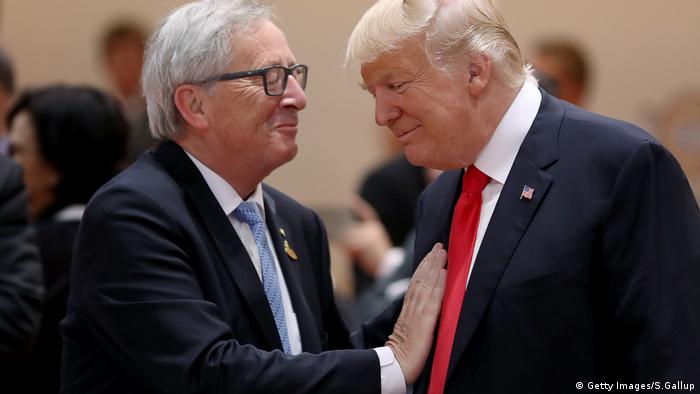 With a reduced Chinese market, US soybean exporters have few options but to target EU buyers.

"The impact of China's absence has been felt in US markets, lowering soybean prices there. The result will be that China and the US will share the cost of tariffs as US prices decline on lost demand and the Chinese pay a tariff on lower priced US soybeans," Magdovitz said.

A spokeswoman for the Commission later admitted the increase was thanks to market forces, rather than any action on the part of the bloc to fend off new tariffs. A senior EU official also told The Associated Press news agency that the increase in soybean purchases from the US was "due only to economics," as they are cheaper than imports from Brazil and Argentina.

What goes round comes round

Soybean is a major ingredient for animal feed in the EU, which is highly dependent on imports, mainly from Brazil, which contributes about 30 percent of EU total imports. The Netherlands is the EU's biggest buyer, followed by Spain and Denmark.

China's tariffs on US farm products have also pushed Brazilian soybean prices higher due to increased demand from China, which in turn means lower EU imports from Brazil as well as Paraguay.

"The result of Chinese tariffs on US soybeans has been to raise prices above Brazilian soybeans and drive Chinese demand from the US to Brazil," Magdovitz said. "China has effectively stopped importing US soybeans, but the expectation is that Brazil — and other, smaller exporters like Canada and Russia — will be unable to fully satisfy Chinese demand."

The US Soybean Export Council (USSEC) says an increasing awareness of quality differences by soy production origin is taking place in Europe and that it plays to US producers' strengths.

"The US Soy industry holds a competitive advantage in the greater Europe region because of its work in the area of sustainability, which is of increasing importance to the European food and feed industry," the USSEC said in a statement.

"Europe is the world's second largest GMO soy importer behind China. Approximately 90 percent of commercial feed produced in Europe is GMO," it read.

"This isn't an overriding issue for the EU which largely imports GM soybeans. Currently there is a wide premium between rapeseed and soybeans which is encouraging EU oilseed crushers to use soybeans and receive better margins," Magdovitz concluded.

US to apply more pressure on China with new tariff hike

US Trade Representative Robert Lighthizer has said the scope of tariffs on China is set to increase. The measure would come amid an ongoing trade dispute and after Trump threatened to apply levies on all Chinese goods. (02.08.2018)

The Chinese yuan has been on a losing streak in recent days, drawing fresh ire from US President Trump who accuses Beijing of deliberately depreciating the yuan to boost its exports and undercut American competitiveness. (30.07.2018)