German Chancellor Angela Merkel has said that EU leaders will discuss - but likely not impose - broad economic sanctions against Russia at a summit in Brussels. French President Hollande called off an EU-Russia summit. 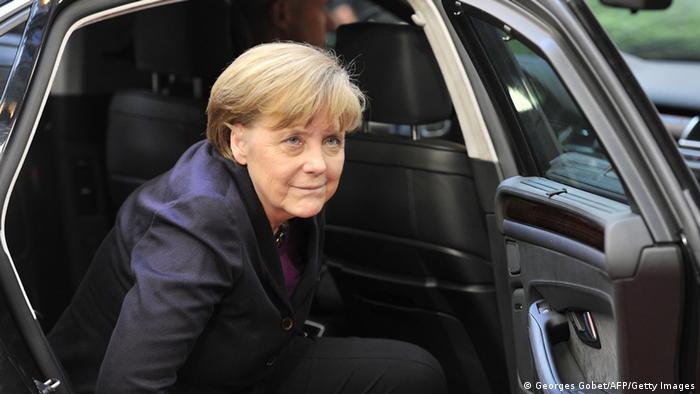 European leaders arrived in Brussels for a summit sure to be dominated by developments in Crimea. They convened as Russian lawmakers in the Duma approved the measure to incorporate Crimea into the Russian Federation, following Sunday's contentious referendum on leaving Ukraine.

French President Francois Hollande said on arrival that the EU would cancel a June summit with Russia and decide on new sanctions against individuals during the meeting.

Hollande called the situation in Crimea "unacceptable" and said that "sanctions will be decided against a certain number of figures, regarding their personal situation or their financial assets."

"There was to have been a meeting between the EU and Russia but it cannot take place in these conditions," Hollande said, referring to the planned June summit in St. Petersburg.

Like Chancellor Angela Merkel, speaking to the German Bundestag prior to her departure for the summit, Hollande said that broader economic sanctions against Russia would be "discussed" and "prepared" in Brussels.

Broader sanctions up for discussion

Merkel told German parliamentarians that no blanket economic sanctions against Russia - what the EU commonly refers to as a phase three of its response - were likely to be imposed in Brussels.

"The [summit] will make clear that we are ready at any time to introduce phase-three measures if there is a worsening of the situation," Merkel said. This third phase would follow the cancellation of preparations for the G8 summit in Sochi and the first round of targeted visa bans and asset freezes against 21 people. Similar "phase-two" measures against further individuals are expected during the Brussels summit.

Taken in its entirety, the EU is Russia's largest trading partner.

Leaders will also focus on strengthening Ukraine's interim government. Kyiv's Interim Prime Minister Arseniy Yatsenyuk was scheduled to sign an EU Association Agreement - an offer of closer ties that often serves as a step on the road to joining the bloc - in Brussels on Friday.

US President Barack Obama similarly said that the US would consider "sanctions, not just on individuals, but on key sectors of the Russian economy," if Russia "continues to escalate the situation."

"This is not our preferred outcome," Obama said, pointing to major financial repercussions for Russia, and perhaps the world. The president said he had signed an executive order allowing for such sanctions in the case of further escalation, officials in Washington said a Russian incursion into areas of Ukraine other than Crimea might qualify.

Like the EU, Washington has so far issued only targeted sanctions against individuals; the US Treasury Department on Thursday identified the affected Russian financial institution as Bank Rossiya.

"Bank Rossiya's shareholders include members of [Russian President Vladimir] Putin's inner circle associated with the Ozero Dacha Cooperative, a housing community in which they live," the Treasury Department said.

Russia responded on Thursday by issuing sanctions against certain US individuals. Prominent opposition Republican politicians, like the Speaker of the House of Representatives John Boehner and Senator John McCain, a defeated presidential candidate in 2008, made the Kremlin's list.

Obama also said on Thursday that he wanted to repeat the message that Vice President Joe Biden had taken to NATO members Poland and Lithuania this week, namely that "America's support for our NATO allies is unwavering - we are bound together by our profound Article 5 to defend one another."

Article 5 of the North Atlantic Treaty Organization says that an armed attack on one or more member state is considered an attack against the whole alliance, pledging a combined response that can include the use of force. Ukraine is a member of neither NATO nor the EU.