Wealthy EU nations have clashed with the European Commission, demanding a smaller EU budget. France has warned that cuts to agricultural subsidies were 'unacceptable.' 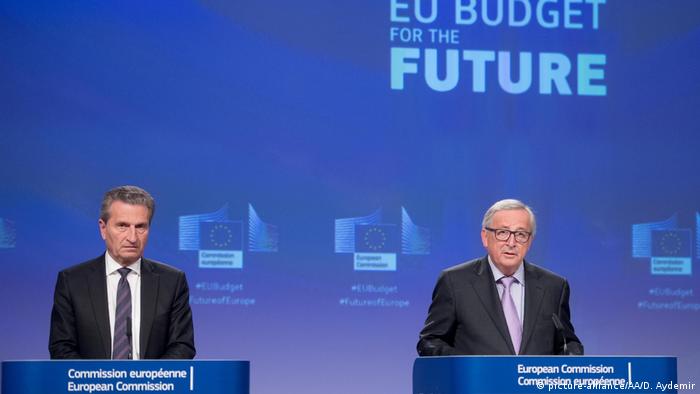 The European Commission's announcement of a new post-Brexit budget for 2021-2027 has been met with criticism from some of the EU's largest contributors, suggesting tough negotiations ahead for the block's funding priorities.

Paris took direct aim at one of the main cuts proposed by Brussels, the 5 percent reduction of the Common Agricultural Policy program. "Such a drastic, massive and blind cut is simply unimaginable," a statement from the agriculture ministry said, adding that France "will not accept any decrease in direct income for farmers".

The proposed reduction would create an "unprecedented risk" for French farms, the ministry statement added.

Paris has historically defended the agricultural subsidies, which fall within the largest chunk of EU spending. The farm subsidies represent substantial aid to the politically influential, but economically struggling French agricultural industry.

Read more: Brussels in for clash with EU members over budget plans

In a statement on Wednesday, Rutte expressed his view that a smaller EU, following the UK's departure, "must also mean a smaller budget." The Dutch Prime Minister indicated that this means making tough choices.

The Netherlands contributes more to the EU than it gets gets in return, as the small nation is one of the wealthier governments in the bloc. Rutte has been an advocate for EU budgetary restraint since the aftermath of the Brexit vote.

Read more: Opinion: The EU budget is about more than money

Danish Prime Minister Lars Lokke Rasmussen took to Twitter to echo the sentiments of his Dutch counterpart, saying that "a smaller EU should mean a smaller budget!"

Rasmussen added that the EU "cannot ask European taxpayers to pay for Brexit."

Austrian Chancellor Sebastian Kurz joined the chorus against the budget, saying the proposal was "far from an acceptable solution" and warned of "tough negotiations" ahead. Kurz said the proposal places a heavier burden on contributors and said that Brexit should be used as an opportunity to make the EU more efficient.

Nonetheless, the Austrian Chancellor applauded the new budget's contribution to EU border security, which he considered a "positive" measure.

The German government said the new budget proposal was a good basis to beginning negotiations on the future of the EU's finances.

In a joint statement, German Foreign Minister Heiko Maas and Finance Minister Olaf Scholz said the proposal would "considerably increase" the financial burden on Germany to the tune of €10 billion ($12 billion) more a year.

"We are willing to fulfill our responsibilities for strengthening the EU but this also requires a fair burden-sharing of all member states," the pair said.

Maas and Scholz added that Germany would seek to "sustainably strengthen the EU's capability for action over the next seven years" and enforce a "fundamental modernization" of EU spending.

Polish officials delivered a measured reaction to the budget announcement, expressing relief that the proposed long-term plan's cuts and shifts in spending are much less painful than expected.

Prior to the release of the new budget, Szymanski had warned that Poland would "not accept arbitrary mechanisms which will make the funds an instrument of political pressure," in reference to the rule of law component of the spending plan. Upon release, Szymanski only remarked that the road to a final compromise over the EU budget "is still very long."