EU budget breakdown: What you need to know

The EU's new proposed budget includes cuts to farming subsidies, big spending for border patrol, a huge increase for research, a massive boost for young people and even allows wayward member states to be cut off. 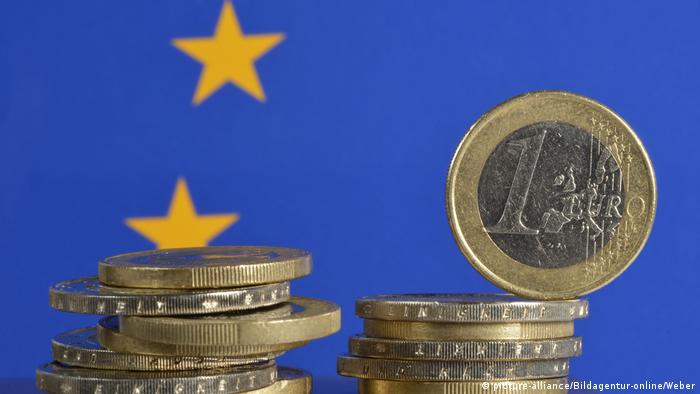 The European Commission on Wednesday unveiled its new comprehensive budget proposal for the European Union from 2021 to 2027. It hopes to tackle the bloc's biggest challenges and to fill an annual funding gap of more than €12 billion ($14.4 billion) left by Britain's departure.

The new budget would cost €1.14 trillion and would account for 1.11 percent of the gross national income of the 27 remaining nations in the EU, a slight increase from the current pre-brexit figure of 1.03 percent. Adjusted for future inflation, the plan would be €1.28 trillion.

The budget still needs to be approved by an absolute majority in the European Parliament and the Council of Europe. The Commission has urged for the approval to occur by 2019, as it expects that implementation of the budget programs may take from 12 to 18 months.

Read more: Brussels in for clash with EU members over budget plans

What is in the new budget?

The Commission identified security and border protection spending as one of the EU's main priorities. The new budget nearly triples expenditure, from €13 billion to €33 billion in funding for external border management, migration and asylum.

This funding could help deploy some 10,000 border guards to the European Border and Coast Guard Agency by 2027.

The Commission pledged to increase investment in security by 40 percent. The new budget would grant €13 billion to the European Defense Fund to "complement and catalyse" its current spending in research and development. It would also providing €6.5 billion to "military mobility," an ambitious project to make it easier to move troops and equipment around the continent.

Additionally, the budget includes €2.5 billion for an internal security fund to fight extremism and cybercrime.

The new budget proposes a "moderate" reduction of 5 percent in funding each, to the Common Agricultural Policy and Cohesion Policy programs. The Commission based the decision to cut the funding of these programs on the "new responsibilities" that the EU now faces and due to the Brexit funding gap.

The Commission considers that the rule of law is a prerequisite to sound financial management and EU funding. To that end, it has proposed a mechanism in the budget that would allow the bloc to suspend, reduce or restrict access to EU funding to countries "in a manner proportionate to the nature, gravity and scope of the rule of law deficiencies." The proposal was explained as an effort to "protect EU taxpayers' money."

This would give the bloc additional tools to reign in so-called "illiberal democracies" other than Article 7.

The new budget would provide €123 billion for its foreign aid budget, an increase of 26 percent. The budget is comprised of humanitarian aid, pre-accession assistance (aid to EU candidate nations) and global aid.

Read more: Opinion: Africa should not become too dependent on Europe

The new budget more than doubles funding for young people, such as the ERASMUS educational exchange with €30 billion and the European Solidarity Corps with €1.3 billion, which includes €700 million to support Interrail benefits.

The Commission has proposed the establishment of a Reform Support Program that would receive €25 billion. The program would offer financial and technical support to national-level reforms in member states. It would include reforms of product and labor markets, education, taxation, the development of capital markets, improvement of business climate, and investment in human capital and public administration reforms.

The Commission would also increase investment in research and innovation by 50 percent, with €100 billion allocated to the flagship programs Horizon Europe and Euratom.

Aditionally, the new budget seeks a nearly 9-fold increase in investments in digital transformation and networks, reaching € 12 billion in funds.

Adhering to the Paris Agreement and to the United Nations Sustainable Development Goals, the Commission proposed to set a more ambitious goal for "climate mainstreaming" across all EU programs and has set a 25 percent target of EU revenues to be allocated to climate objectives.

In addition to the reduction of farm subsidies, the Commission has also outlined a "basket" of new sources of funding. This includes 20 percent of the revenues from the Emissions Trading System, a 3 percent call rate applied to the new Common Consolidated Corporate Tax Base and a contribution of 80 cents per kilo of non-recycled plastic packaging waste for each member state. In total, the new sources will add €22 billion in annual revenue, or approximately 12 percent of the budget's earnings.

The European Commission believes that the new budget proposal offers a "more coherent, focused and transparent framework" for EU financing. The Commission stresses that the budget's provisions are also more closely aligned with "political priorities."

To create the new budget proposal, the European Commission gathered input for over a year from the European Parliament, EU Member States, national parliaments, beneficiaries of EU funding and stakeholders, as well as a public open-forum consultation.

Opinion: Poland will be the EU's biggest challenge in 2018

Poland refuses to reinstate the rule of law, yet happily accepts EU funding. Authorities in Brussels can no longer accept this. It puts the bloc at risk of falling apart, says DW's Bernd Riegert. (31.12.2017)

The European Parliament is demanding an end to the practice of countries selling EU citizenship.