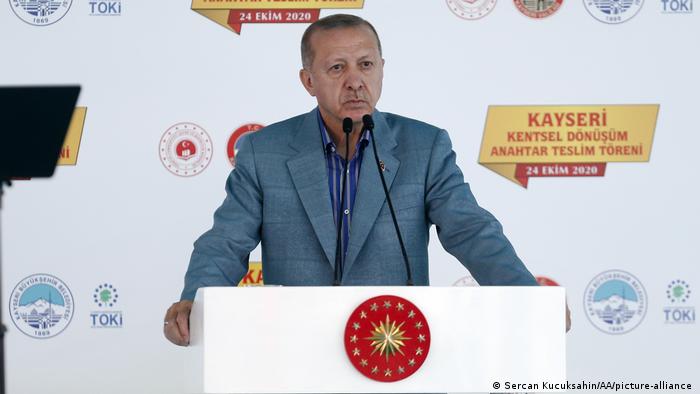 Turkish President Recep Tayyip Erdogan blasted France and Europe on Saturday over what he saw as "rising Islamophobia," just days after French President Emmanuel Macron dedicated a high-level ceremony to Samuel Paty, a teacher who was killed for showing students caricatures of Prophet Muhammad.

The suspect in Paty's gruesome beheading was an 18-year-old born in Moscow and originating from Chechnya, the predominantly Muslim Russian republic in the North Caucasus. He was subsequently shot and killed by police.

After the crime, authorities launched a crackdown on radical Islam, closing one mosque, raiding several properties and arresting at least 15 people.

"What problem does this person called Macron have with Muslims and Islam? Macron needs treatment on a mental level," Erdogan said in a speech at a provincial congress of his AK Party in the central Turkish city of Kayseri.

"What else can be said to a head of state who does not understand freedom of belief and who behaves in this way to millions of people living in his country who are members of a different faith?" he added.

Erdogan, a pious Muslim who has brought Islam into the mainstream of politics in Turkey, had already clashed with Macron on the subject prior to the Paty's murder.

Macron had pledged to fight "Islamist separatism" that threatened to take hold of some Muslim communities around France and Erdogan accused him of "a clear provocation" that showed the French leader's "impertinence."

The exchange prompted both leaders, whose countries share NATO membership, to hold a call last month, where they promised to improve ties and keep communication channels open.

However, later Saturday, Paris condemned Erdogan's remarks as "unacceptable," adding that adding it was recalling its envoy to Ankara to discuss the matter.

"Excess and rudeness are not a method. We demand that Erdogan change the course of his policy because it is dangerous in every respect," a French presidential official told AFP.

France was not the only country that Erdogan criticized in his speech on Saturday. The Turkish president also warned that Europe was beset by an "Islamophobia disease."

"We are confronted daily with new and concerning signs of rising Islamophobia in Europe," Erdogan said.

Read more: Islam still faces obstacles on path to be part of Germany

The raid, involving over 100 police personnel in Berlin searched several businesses and a mosque suspected of fraudulently claiming subsidies related to the coronavirus pandemic, seizing €7,000 in cash, data storage devices, computers and files.

Erdogan said there was no justification for the Berlin raid, which was "carried out in a disrespectful manner."

The Turkish president urged Turkish minorities, many of whom live in Germany, to not to forget that every Islamophobic act in Europe was also an act of "hostility against Turks."

"Because for a Westerner, a Muslim is a Turk and a Turk is a Muslim," Erdogan said.