Throwing away food that could still be eaten isn't just a waste of money, it also costs precious resources, hurts the climate, threatens biodiversity and can contaminate our soil with microplastics. 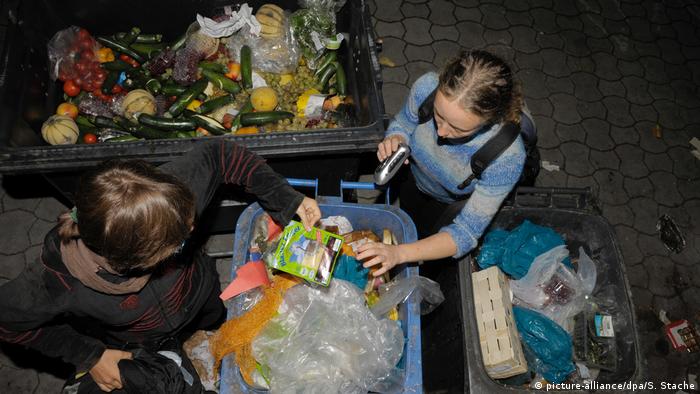 "I once found 200 to 300 Euros worth of Sushi, still in its original packaging," Lea recalls. It's not her real name. She wants to remain anonymous because what she does could lead to prosecution in Germany.

The college student goes dumpster diving, which is the practice of retrieving edible food from supermarket dumpsters after shop hours. Some store owners consider it theft. Not Lea though.

"A lot of food is produced but never eaten. I want to contribute to a redistribution", she says.

Largely because of massive waste of natural resources but also because she wants to make an active contribution to environmental protection.

The production of food consumes water, fertilizer and pesticides but much of it is thrown away — especially in affluent countries — despite still being perfectly edible.

Food waste also contributes to climate change, indirectly threatens biodiversity and even leads to more microplastics in our soil, as new studies have shown.

The Food and Agriculture Organization of the United Nations (FAO) estimates that one third of all food produced worldwide is never eaten.

Food that spoils while still in the fields, during storage, transport or processing is classified as food loss. The food that makes it onto the store shelves and either doesn't get sold or is bought and never eaten, is characterized as food waste.

Problems start early on along the value chain

Why so much food spoils during production is something that the FAO's Rosa Rolle experienced first-hand during her work with small-scale farmers in Bangladesh.

"They would harvest the tomatoes, put them in 50 kilogram sacks and by the time they got them to market only 50% would be of good marketable quality."

Though that implies a huge financial blow for farmers, the environmental damage of such food loss is limited. Both because less energy has gone into transport and processing, and because as in many other developing countries, Bangladesh still has a traditional secondary use for imperfect produce.

"What remains is largely fed to livestock", says Rolle.

The situation is completely different for the sushi Lea found in the garbage of her supermarket in Germany. It wouldn't be used as fodder and considerable energy would have gone into the transportation and processing of the different ingredients between the time they left the ocean and the field, to the time they were packaged for consumption.

In fact, in the case of rice, the environmental impact starts on the field. Unlike other cereals such as wheat or corn, rice is a marsh plant, which needs to be covered with water to thrive. But because organic matter decomposes differently in the low-oxygen environment below water than it does on land, rice fields generate large amounts of the extremely damaging climate gas methane.

Yet some 30% of the global grain crop, including rice, never makes it onto a plate.

In general, the production of food consumes a lot of resources, often putting serious stress on the environment. In fact, according to the FAO, more than a quarter of all agricultural land available worldwide is used to produce food that never makes it to the table.

And because forests that are home to a variety of animal species, are still being cleared on an vast scale to make way for cattle herds or palm oil plantations,  food production impacts biodiversity. So if less meat was wasted, less forest might end up being cleared to graze cattle.

Doing Your Bit: An app to cut food waste

And what about water? According to the FAO, every year, about 250 billion liters of water are used worldwide to produce foods that are never eaten. That's the equivalent of filling the great pyramid of Giza with water — almost 1 million times.

But let's return to Lea's sushi, and the fish within. Some 35% of the fish, mussels and shellfish caught and grown worldwide are not actually eaten.

And then there's still the plastic packaging for the sushi. 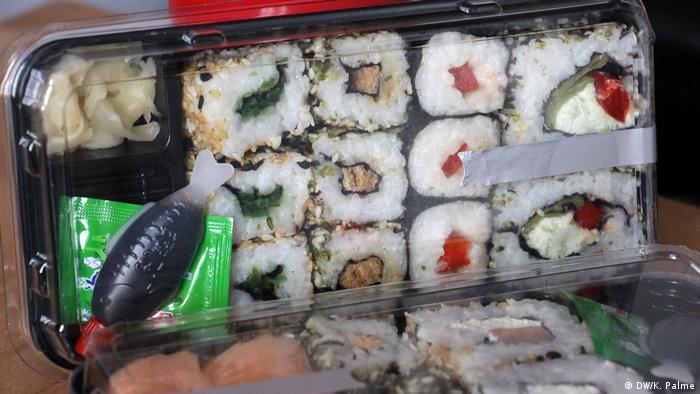 Plastic trash: via the organic waste bin, this sushi packaging can make its way onto our fields — as microplastic

Plastic in the soil

Food that gets thrown away is often discarded while it's still packaged in plastic. But in compost or biogas facilities where organic waste is processed, it's difficult to separate the plastic from the organic matter.

As a research team from the University of Bayreuth discovered, that has far-reaching consequences. In a single ton of compost from domestic organic waste, they found up to 440,000 pieces of microplastic.

They also found microplastics on German agricultural lands — in concentrations of up to 20 times higher than in the world's oceans. And from out there on the fields, it can potentially enter our food chain.

There is no instant solution to the problem of food loss and food waste but every bit of progress towards avoiding it helps.

On the food loss front, Rosa Rolle has made some inroads helping the small-scale farmers in Bangladesh save more of their tomato harvest: they now use reusable, easily stackable and airy plastic boxes to transport their fragile fruits. Since they've started doing so, 90% of the tomatoes reach both the market and the consumer in good shape.

Germans cook plenty of vegetables and say they care about animal welfare — but they aren't ready to give up their beloved sausages. (04.01.2018)