A small German network has turned to parliament to raise awareness of the wastefulness of our throw-away society - and to urge that dumpster diving be decriminalized. 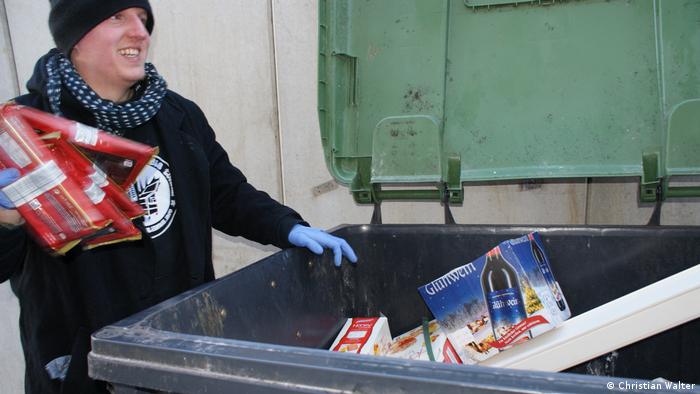 The timing is great, says Christian Walter. "It's an election year!"

The co-founder of the Aachen-based alliance that goes by the unwieldy name "Dumpster Diving is no Crime" is confident the network will win enough supporters to force the German parliament to move forward on an online petition calling for the decriminalization of dumpster diving.

Once parliament activates the petition, the alliance - which was founded just last year and, according to its own count, has 125,849 supporters - has all of 30 days to collect at least 50,000 signatures. If the alliance succeeds, the German parliament's committee on petitions will have to address the issue, open it up to a debate - and "answer tough questions," Walter told DW.

Better chances in an election year

The alliance's petition, listed as number 69466 on the German parliament's public petition website, calls for the "expiration of ownership of publicly accessible trash" to make dumpster diving exempt from punishment. In a nutshell, it's about amending section 242 of the German criminal code to decriminalize dumpster diving, Walter explains. 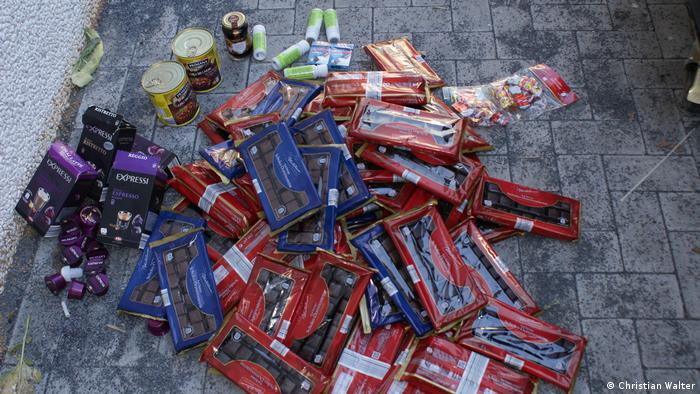 From the looks of it, Walter made this haul right after Christmas

Chocolate and yogurt close to the best-by or expiration date, bruised fruit and vegetables, day-old bread - the list of salvageable food is endless. In Germany, up to 20 million tons of still edible food is thrown out every year, the alliance says.

The German Left Party has pledged its support for the petition being circulated by "Dumpster Diving is no Crime." As one of Germany's very few dumpster-diving networks, the alliance focuses its efforts on raising public awareness of the wastefulness of consumer society and throw-away culture.

The dumpster-diving scene is not organized, 28-year-old Walter says. "There is no national umbrella organization."

The Aachen alliance is well-organized. It offers information, pamphlets and public "dumpster-diving introduction tours," complete with tips on how to behave, what to watch out for, possible hazards and the legal situation. 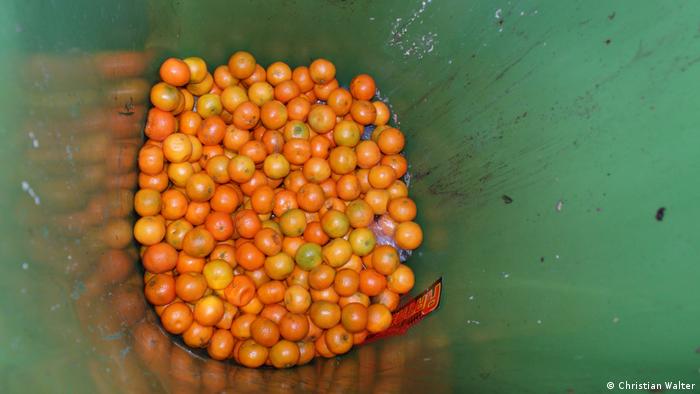 These tangerines may be bruised - but inedible?

Walter himself has "containered" for the past ten years, which means sifting through large commercial trash bins usually located by supermarkets on private property, focusing on groceries. "It's important to be quiet, not to leave a mess, wear gloves and to avoid taking meat and fish." Beware large amounts of the same food not past its expiration date, the dumpster diving activist warns: "It could be a recall."

Divers in Germany can get into trouble for trespassing if they climb over fences to reach a bin, or simply for theft, but the illegality of "containering" is more often than not disregarded by authorities as the goods picked are often of low value.

The issue of food waste has not gone totally unnoticed by the government, however. On Wednesday, the German Agriculture Minister is set to announce the recipient of the "Zu gut für die Tonne" ("too good for the garbage can") federal award for a group initiative, individual or project committed to avoiding food waste.

Berliners reap what they didn't sow

Hedonists love Berlin for its fabled forbidden fruit. But in late summer, when the leaves of the linden and chestnut trees begin turning gold, the city's abundance of not-so forbidden fruit is even more tempting. (22.08.2015)

Berlin is investigating war crimes committed by Russian soldiers in Ukraine. Witness accounts by Ukrainian refugees are crucial, regardless of whether the perpetrators will eventually be tried in Germany or elsewhere.

For years, workers at McDonald's around the globe have complained of sexual harassment. As part of a push for corporate accountability, the fast-food chain's accusers were invited to speak at the European Parliament.