'Food savers' brunch' in Berlin to protest against wastage

Two German charities have held a brunch in Berlin to protest against the high amount of perfectly good food that is thrown away each day. All of the food served at the event had been bound for the dumpster. 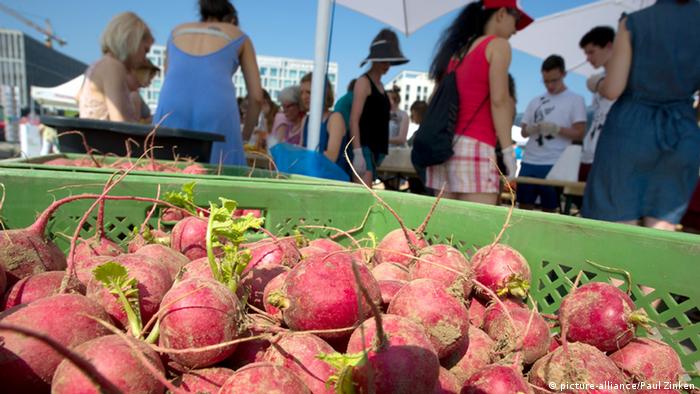 According to the organizers of the event, the German chapter of the World Wide Fund for Nature (WWF) and the German charity Welthungerhilfe (German hunger aid), around 2,500 people took part in the event held outside of Berlin's main train station on Saturday.

"Germany needs a national action plan to combat food wastage," said Andreas Hoppe, an actor who is well-known in the country due to his role in the popular Sunday evening murder mystery series "Tatort."

Speaking as he officially opened the event, Hoppe called for amount of food that is wasted annually in Germany to be halved in the next few years.

On Sunday, the WWF Deutschland, which along with Welthungerhilfe had used the Twitter hashtag #Essensretterbrunch (food savers' brunch) to publicize the event, followed it up by calling on its supporters to sign an online petition against wasting food.

According to the WWF Deutschland and Welthungerhilfe, all of the items served on Saturday were made of food that had been saved from the dumpster, as it had either passed its "best before" date or had been deemed unsalable by retailers due to flaws in its appearance or packaging.

We pour ice water over our heads, paint red lipstick lashes on our backs and upload pictures of us holding signs with hashtags. But how effective are these social media campaigns offline? Life Links takes a look. (27.06.2015)

Germany throws away over 18 million tones of food every year - that's 313 kilograms per second, according to a study by the WWF. Activists have called for an initiative urging consumers to rethink their eating habits. (18.06.2015)

The dump divers: Rescuing food in the Big Apple

New York is the world's most wasteful megacity. Freegans roam the streets, rummaging through trash bags, looking for food and other discarded goods. Who are these people? Janosch Delcker reports from NY. (26.05.2015)

As the Taliban advances on Kabul, there is rising concern about German nationals and local Afghans who helped the Bundeswehr and how fast they can be evacuated.

The head of Greenpeace International, Jennifer Morgan, has become Germany's new climate envoy. Her links to Germany, and the country's environmental policies, go back more than two decades.