The dump divers: Rescuing food in the Big Apple | Business | Economy and finance news from a German perspective | DW | 26.05.2015

The dump divers: Rescuing food in the Big Apple

New York is the world's most wasteful megacity. Freegans roam the streets, rummaging through trash bags, looking for food and other discarded goods. Who are these people? Janosch Delcker reports from NY. 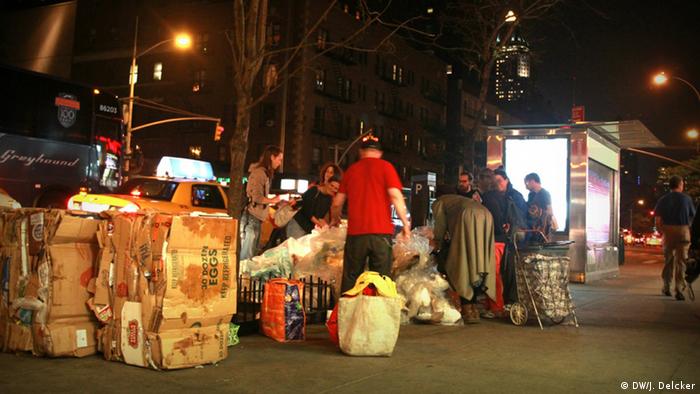 The pile of black trash bags lies in the shadow of the Time Warner Center whose penthouse recently listed for a sales price of $ 42 million (38.6 million euros).

Martha doesn't care about the Time Warner Center. She is excited about the dozen unopened packs of paper napkins she found in one of the bags. They have Halloween motives printed on them, and it's late May, but Martha sells cake every once in a while to make some money, and the serviettes will be perfect for that.

It is 9:30 p.m. on a Tuesday night. A pile of trash bags in front a pharmacy is the first stop of the "trash tour," organized by a New York based activist group called the "Freegans." The event is an introduction to how and where to find useful goods in the trash of retailers and residences of the city.

Rage against the machine

People have called the practice "urban foraging," "salvaging food," "food rescue," "dumpster diving" or "garbage picking." It is not only about finding free food, the Freegans say. That's just one aspect of what they regard as a larger social movement; a revolt against the current economic system.

"It's a disgust with the system that I live in. How could it be that the people are okay with throwing out good food?" wondered Janet Kalish, an organizer for the group.

Before the Freegans head out that night, they hand out flyers to the participants to pass on to curious onlookers: "Production of the very food we eat involves horrendous animal abuse, massive waste of water, release of hazardous chemicals and greenhouse gases into the environment," the flyer reads.

"Freegans resist the omnipresent advertising urging us to buy what we don't need, to spend what we can't afford, to envy what we don't have, and to discard 'last year's model.'" 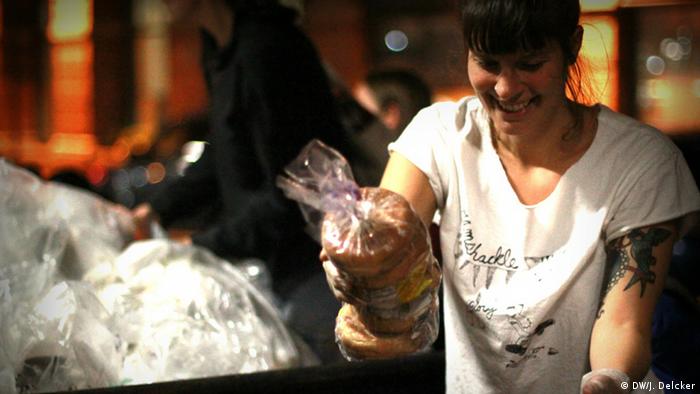 In the US, nearly a third of all food ends up in the trash

Kalish is a 52-year-old former high school teacher with a dark blonde ponytail and a wicked smile. "I think everybody remembers their first time," she said when asked about her first encounter with people involved in freeganism. That was in 2004. "I was amazed that these people could live on the food that they find," she said. "Some of them were never buying food."

"At that point, I was skeptical and I was nervous, and I was thinking, it must be dangerous, it must be unhealthy, there must be a good reason why this food is being thrown out," she remembered. "It didn't make sense to me. What I learned is that it doesn't make sense. There is something really wrong with our system."

One man's trash, another man's treasure

Idealism aside, the reality of dumpster diving can be fairly unromantic. The second stop of the trash tour is the trash pile in front of a high-end supermarket. When Benjamin, a 31-years old college professor, opens a bag, the sweet stench of putrefaction pours out.

"This one looks pretty gross. It seems to be mostly actual trash. Avocado skins, and aluminum foil with salad dip." He closes the bag again. "I think this one is no good."

He found the website of the Freegans online, and learned about the trash tour. "I'm looking for more interesting ways to be a person. New York City is way too expensive. Buying groceries and rent are way too expensive. And this helps cutting those expenses on a daily basis."

The trash pile in front of the supermarket doesn't prove much of a success. He finds two baguette halves, that's it. "I think there are certain things that I am much more comfortable eating than others," he said. "Some of the processed food, for example, that have dates that haven't come off yet."

Does it feel weird to rummage through what other people threw away? "I am probably not ready to eat cookies that have bites out of them or open things that are just loose in the bag," he said smilingly. "But who knows, let's dig through a few more bags and see what happens." 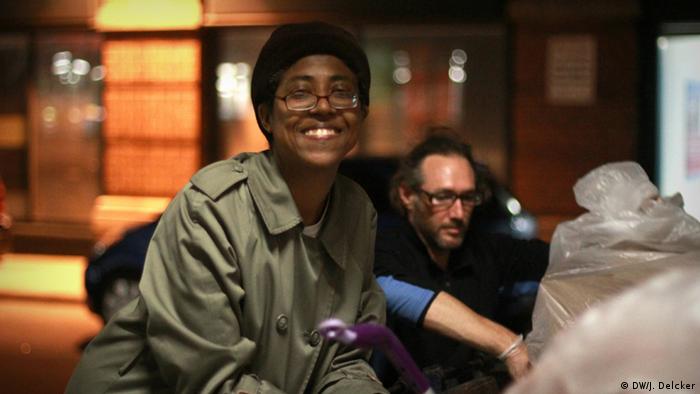 Urban foraging or dumpster diving: Call it what you will, freeganism is about something bigger

New York City produces more waste than any other megacity in the world. At the same time, life in the city has continuously become more unaffordable for lower and middle-income residents. While some people live affluently, producing tons of waste, others barely scrape by. This discrepancy is the breeding ground for dumpster diving in New York, and it's similar in other cities in the country like San Francisco, Seattle, Washington, D.C., or Chicago.

A 2014 study by the US Department of Agriculture found that the country throws away 31 percent of all its food. New York alone generates 14 million tons of waste and recyclables per year. City officials have since implemented an ambitious program to cut back on waste. It aims to reduce waste by 90 percent by 2030, compared to 2005 levels.

The city administration has introduced more than 200 initiatives, like efforts to educate residents about reducing food waste or about minimizing the use of plastic bags. Other US cities have launched incentives for restaurants and businesses to cut the amount of food they are throwing away. 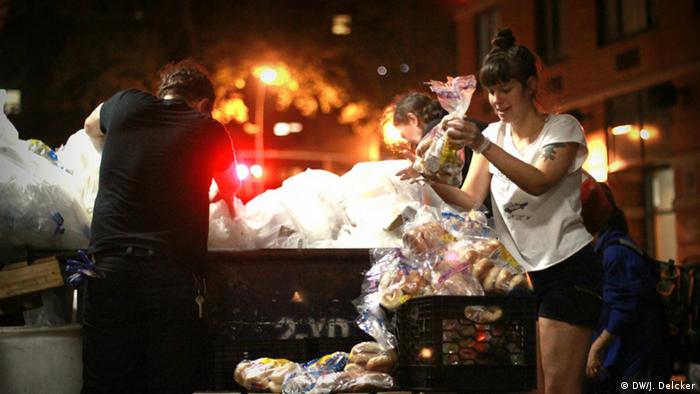 Maria heard about the Freegans through friends. It's her first time dumpster diving. The 25-year-old teacher is visiting New York from her home country Uruguay.

"I went online because I could not believe the things they were telling me," she said, while pulling more than ten bags filled with bagels out of a trash container in the back alley of a supermarket.

"In Uruguay, it is very different. There aren't huge amounts of waste. And things don't get thrown out like this."

According to the United Nations, "consumers in rich countries waste almost as much food as the entire net food production of sub-Saharan Africa" per year.

After coming to New York, Maria wanted to see for herself what her friends had told her. "It's kind of sick, it's how the system works," she said while shaking her head. "It's terrible."

At least in New York, awareness about garbage, and food waste in particular, seems to be growing, albeit slowly.

"I'm not doing this because I get free stuff, although it's nice to get free stuff," organizer Janet Kalish said. "If we didn't have to dumpster dive, because there is no waste, that would be a perfect world. If food was distributed in a way that's not all about profit that would be better."

However, dumpster diving may just be a symptom of another, even bigger problem: the growing wealth inequality in the country.

Martha - the woman with the napkins - replied hesitantly when asked about what she does for a living. Since losing her job in market research, she has been unemployed, she finally said. She added that she probably couldn't survive in New York without access to other people's waste.