German government rolls out plan to curb food waste | Germany | News and in-depth reporting from Berlin and beyond | DW | 20.02.2019

People in Germany throw away hundreds of tons of food every year. Now the government has presented a concept to end food waste — but critics say the plan does not go far enough. 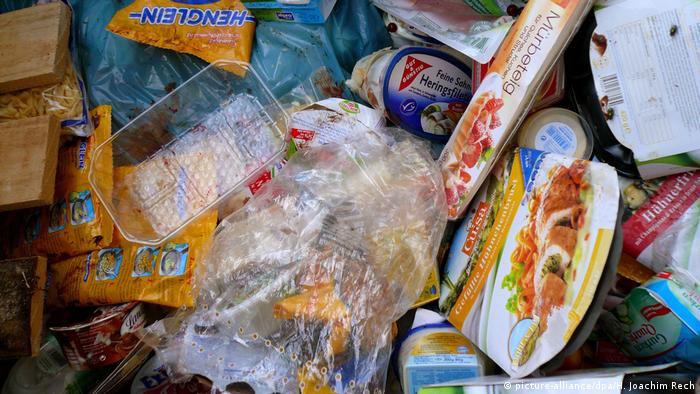 If an apple is bruised, if an item is past its expiration date, or if you simply bought too much, then the solution in many German households is simple: Just toss it! Every year, the average German throws away 55 kilograms (120 pounds) of food.

This is not only unfortunate, it is avoidable, says Julia Klöckner, Germany's minister for agriculture, food and consumer protection. Klöckner wants to halve the amount of food thrown away in the country by 2030. Chancellor Angela Merkel's Cabinet adopted a concept to reach this goal on Wednesday. It is not only aimed at end consumers — i.e. customers in supermarkets — but also at companies, organizations, politicians and scientists. Klöckner made it clear that reducing waste is an "economic, ecological and ethical obligation" for everyone.

The most important part of the plan is packaging food in smaller quantities. This is where manufacturers come in. In order to avoid superfluity, certain aspects of the retail sector need to be improved — for example more suitable order quantities for stores, smaller and more frequent deliveries of goods, distribution of products between branches or special low-price campaigns. 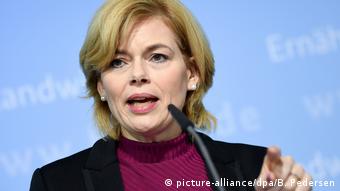 Another important factor is "intelligent" packaging, that is, packaging that uses technical aids to indicate to the consumer whether a product is still edible. This can be done, for example, with a red-yellow-green traffic light-style system. Around €14 million ($15.9 million) is to be invested in developing the technology.

People in Germany not only buy more than they can eat. According to Klöckner, they are also too quick to dispose of what they think has expired.

"Particularly in everyday life, we must learn to trust our own senses again: Looking, smelling, tasting — this helps to determine whether food is still edible," Klöckner said.

In many cases, the fact that the best-before date has passed does not mean that a product has to be disposed of.

But is Klöckner's plan ambitious enough to solve the problem of food waste in Germany? Simply taking half of all fresh food off the store shelves is not a solution, Christian Böttcher of the Federal Association of the German Food Trade told DW. "The retailer would not want that, nor would the customer," he said.

Fresh and ready-to-eat products have become particularly popular in Germany in recent years. Böttcher argued that because the government's target did not address that fact, it was set without the customer in mind. He also expressed skepticism about the government's efforts to focus on intelligent packaging. 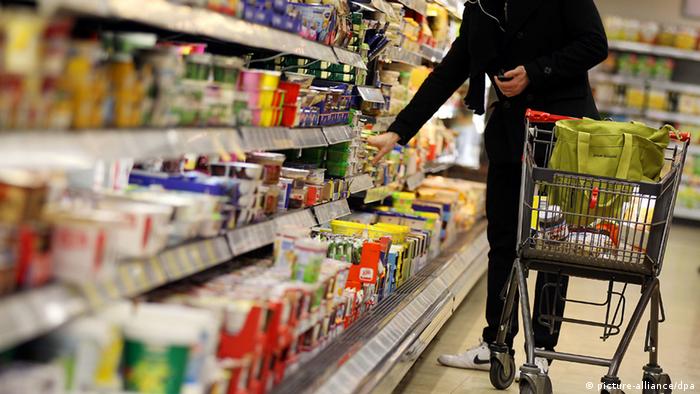 The average German throws away 55 kilograms of food every year

"The importance of the best-before date is overestimated this way, because most of the foods that are thrown away have no best before date at all," Böttcher said, referring to products such as fruits and vegetables that are not sold in industrial packaging.

Böttcher also said that consumers are well aware of the importance of the best-before date. In addition, a traffic light-style color system on a yogurt lid, for example, must indicate very precisely whether the food is still good, he explained. "A vague green-yellow color gradient only makes you unsure," Böttcher said. <div class="opinary-widget-embed" data-poll="do-you-think-technology-can-help-reduce-" data-customer="deutschewelleeng"></div> <script async type="text/javascript" src="//widgets.opinary.com/embed.js"></script>

Lack of appreciation for food?

The food bank Tafel, which ensures that surplus food from retail trade in Germany is collected and passed on to those in need, also said the plan does not go far enough. Something should have happened to reduce food waste years ago, and the federal government's concept lacks a timetable with binding intermediate targets, said Jochen Brühl, chairman of Tafel Deutschland. According to Brühl, the constant availability of food, lack of appreciation and inadequate nutritional education all contribute to the large amounts of food being thrown away.

"Food waste is a sign of low appreciation of food and devalues the work of farmers," said Bernhard Krüsken, general secretary of the German Farmers' Association, which supports the fight against food waste.

To ensure that less food goes from the shopping cart into the garbage, the Ministry of Food and Agriculture has published a few consumer tips together with its new plan to combat waste. Among other things, customers should make a shopping list before going to the store and, very importantly, never go shopping hungry, because that makes for a lot of unnecessary purchases.

Ironically, organic fruit and vegetables are often packaged and labeled with plastic. But such unnecessary packaging and plastic stickers could be replaced by an innovative laser mark. Will it catch on? (05.06.2018)