Fast and fattening: How frozen pizza is killing Germans | Germany | News and in-depth reporting from Berlin and beyond | DW | 28.09.2018

Take a quick walk through a supermarket and it's easy to see why more than half of Germans are overweight. And why politicians face a huge challange to encourage the food industry to sell healthier products. 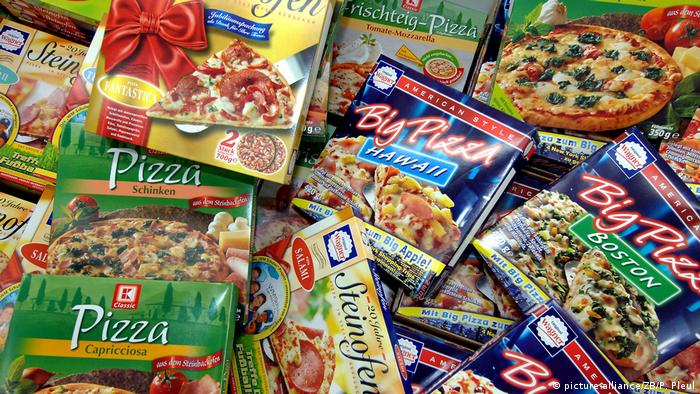 Germany is losing ground to an insidious opponent. The enemy weighs in at just 400 grams but invades from all sides with its extreme affordability. It lures taste buds with gooey melted cheese, spicy salami, and crispy dough.

A quick reach into the freezer and the popular ready meal lands in the shopping trolley, then into the oven and finally onto the table. Time and time again, it is the go-to quick fix and irresistible indulgence. Frozen pizza is the problem facing half of Germany.

"This kind of pizza — worst of all the cheesy crust variety — is actually two meals. Half a pizza contains the calorie requirement of an adult meal. But who eats just one half and puts down the rest?" asks consumer advocate Gabriele Janthur.

Strolling down the aisles of a German supermarket, it is easy to see why 52 percent of Germans are overweight and why that figure is rising.

"The portions are too large, and calorie information is hidden and misleading. On the back of the packaging, it says 266 calories, but that is only for 100 grams! The standard frozen pizza is 400 grams and contains over 1000 calories," she told DW. A stealth calorie bomb.

Despite their relative wealth, many people in industrialized countries just cannot resist the frozen pizza. Worldwide, there are now more overweight people than underweight people. The consequences are fatal: an increased risk of cardiovascular diseases, dyslipidemia, and diabetes, to name a few. The risk of heart attacks and strokes are on the rise, and with it: an early death.

Politicians are desperately trying to counteract this epidemic, above all with education and prevention. In Germany, this task is one for Minister of Food and Agriculture Julia Klöckner from Chancellor Angela Merkel’s Christian Democratic Union (CDU).

Klöckner is facing a seemingly impossible mission: Consumer welfare on the one hand, the interests of the food industry on the other.

At a conference this week at the Center for Nutrition in Bonn, Klöckner revealed how she intends to promote nutritional know-how. In other words, how to get Germans to realize how unhealthy frozen pizza is and that they should avoid it. "My goal is that the healthy choice should become the easy choice," said the minister on a mission.

Klöckner even had this nutritional education project laid out in the government's coalition agreement: €12 million ($13.9 million) has been earmarked for the campaign in the 2019 budget.

The 45-year-old politician wants to expand the action plan for healthy exercise and nutrition, known as "In Form" ("In Shape")  that will target children and senior citizens in particular. But Klöckner also recognizes that young and old will only eat a more balanced diet if the price is right.

"With our numerous initiatives in schools and retirement homes, we have noticed that healthy food can be better, and, at the same time, also cheaper." That was not the case during Klöckner's own time as a student: "Back then the cheapest food in the cafeteria was always Currywurst [sausage with curry powder] and fries and the most expensive item was a salad. We must never go back to that!"

Nutrition expert Dario Sarmadi has an idea to hinder the preference for cheaper, less healthy food choices. "The producers of sugar-laden beverages should pay a levy and thereby be given an incentive to develop healthier recipes,"  said Sarmadi from the consumer advocacy group Foodwatch.

Since April manufacturers in the UK have had to pay a levy, known as the sugar tax, on the sale of drinks with high sugar content.

"Coca-Cola changed its recipe there and sells soft drinks with less sugar. The German government must finally wake up, and follow suit," Sarmadi told DW, adding that authorities need to keep a close eye on commercials: "Three out of four foods advertised at children are sugar bombs and fatty snacks."

Above all, however, a food traffic light system must finally be established in Germany: Red to warn of a high a proportion of fat, sugar, and salt, yellow for medium caution, and green to indicate low and therefore healthy levels. But the EU Parliament rejected enforcing the color-coded system.

"Mrs. Klöckner could nevertheless introduce voluntary food traffic light signals in Germany," said Sarmadi but warned that this may not do much to change the ways of the industry: "They have their own color-coded systems, and they utilize this to create misleading packaging. Take Nutella, which consists of 90 percent fat and sugar, and you will see it is marked not red but yellow!" The simple trick: The industry traffic light measures the nutritional values of unrealistically small portions, rather than composition.

Consumers have no other option than to be guided by quality control stamps. Consumer advocate Gabriele Janthur only puts milk stamped with the EU's certified organic symbol in her shopping cart.

This certification means that the milk has been produced from organic farming and the cows have been kept in a species-appropriate manner.

"The milk is, of course, right down the back of the supermarket," Janthur told DW. "So everyone has to go there and pass by as many other products as possible."

Like the frozen pizza, what may on the surface appear to be a simple obstacle, is, in reality, a complex and multifaceted socio-cultural challenge. "Nutrition is simply complicated field these days because we can eat all the time, in all situations and we have everything in abundance," Janthur said, summing up how fraught it is nowadays to eat healthily.

Something that she acknowledges makes it all the more difficult for her to leave the supermarket with assurance: "If I've bought a lot of fruit and vegetables and my shopping trolley is nice and green, then I'm happy!"