More than 1.4 billion adults across the world have an increased risk of disease because they are not exercising enough, the World Health Organization reports in a new study. There has been no improvement in levels of physical activity among men and women for 15 years. In 2016, more than a quarter of adults across the world did not exercise sufficiently, according to a study conducted by researchers from the World Health Organization (WHO), published today in The Lancet Global Health journal.

The recommended amount of moderate physical activity is 150 minutes a week. In 2016, around 32 percent of women and 23 percent of men — that's one in three women and one in four men — did not reach that goal. This puts a quarter of the world's adult population at risk of type 2 diabetes, cardiovascular disease, dementia and cancer.

Approximately 1.9 million people from 168 countries participated in the survey based on self-reported activity levels. These included activity at work, home, during leisure time and for transport. It is the first study to estimate the global trends in physical activity.

Read more: Germans are sitting too much, and it could be deadly

Countries at the forefront of insufficient physical activity include Germany, New Zealand, the United States, the UK, Argentina, and Brazil. In the U.S. about 40 percent of adults were insufficiently active, in the United Kingdom it was 36 percent. Overall, inactivity in Western countries increased from 31 percent in 2001 to 37 percent in 2016.

The skyrocketing inactivity in wealthier countries can be explained with the fact that many people lead increasingly stationary lives, in which occupations and recreational activities have become more sedentary, transport has become motorized, and the general use of technology has risen.

Another point to address is the gender gap in physical activity. All over the world, women were found to be less active than men, except for East and Southeast Asia. Countries such as Bangladesh, Eritrea, India and Iraq registered a twenty percent or more difference in physical activity levels between men and women.

The authors of the study note that these inequalities have to be addressed globally, for example by giving women improved access to exercise that is affordable, safe and accepted in their culture.

Can a global action plan save us? 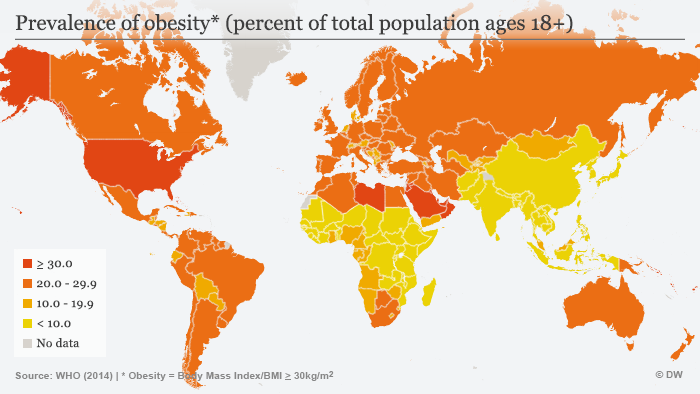 Just recently, in June 2018, the WHO published the "Global action plan on physical activity 2018-2030" with the aim of preventing and treating noncommunicable diseases, including heart disease, diabetes, stroke, and cancer, as well as obesity. Inactivity is a major concern for public health and as such should be tackled on a national level, the authors of the new study emphasize.

The WHO's action plan lists a number of policy areas that focus on creating more active societies by developing and improving public spaces. People should be encouraged to follow activities like cycling and running outside. Governments should therefore support the development and maintenance of activity-enhancing infrastructure, the report states.

Without these changes, the shocking inactivity trend will continue and become an even greater public health concern than it is right now. The WHO's global activity target of a 10 percent decrease of inactivity to be met by 2025 won't be reached without significant changes either.

Foot exercises on the go

These days people don't move much when they travel. Hours of sitting in cars, buses or airplanes can lead to a leaden feeling in your legs, caused by the blood flow slowing down considerably. (01.02.2018)

Pole dancing is often stigmatized in mainstream Egyptian society. But the acrobatic exercise is increasingly in demand among women in a country not famous for championing women's rights. (21.11.2017)