Egyptians vote in referendum with only one obvious choice | Middle East | News and analysis of events in the Arab world | DW | 20.04.2019

Egyptians vote in referendum with only one obvious choice

Egyptians are voting in a referendum that could confirm President Abdel-Fattah el-Sissi's rule until 2030. But in a poll few expect to be free or fair, many say they are aware of only one choice: vote yes. 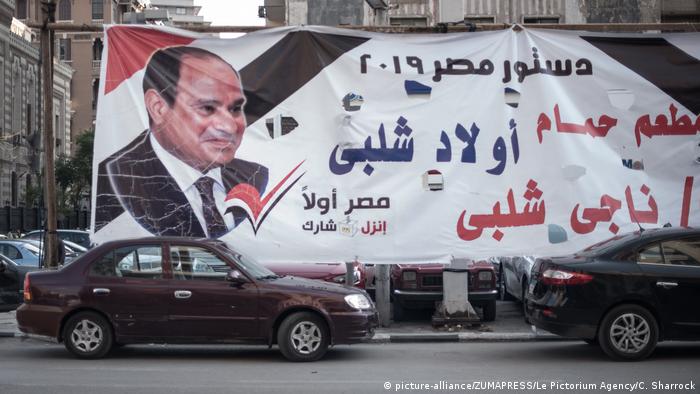 Banners proclaiming support for President Abdel-Fattah el-Sissi filled the streets and nationalist pop music blared from speakers as Egyptians went to the polls on Saturday to vote on sweeping constitutional changes that could allow el-Sissi to rule until 2030.

The proposed amendments, overwhelmingly approved by Egypt's parliament in a first step on Tuesday, would extend presidential term limits from four to six years.

A provisional article also passed Tuesday included an extension of the mandate that el-Sissi won with 97.8% of the vote last year and would allow the president to run for a third term in office in 2024, despite a two-term consecutive limit. The provision, drafted especially for el-Sissi, will help "lead to stability," according to Parliament Speaker Ali Abdel-Aal.

'Do the right thing'

"I'm here to do the right thing," said Heba Reda, 30, as she stood in front of a polling station in downtown Cairo on Saturday, the first of three days of voting. She told DW that she hadn't read the proposed amendments before voting yes.

The sweeping reforms will also increase the role of the Egyptian military, now constitutionally tasked with "safeguarding the constitution and democracy," for the first time in its history. The changes could also permit el-Sissi to appoint heads of the judiciary.

"These changes are right," said Reda, when asked why she voted yes.

The amendments also include sweeteners, such as the creation of a second house of parliament, the role of vice president and a 25% quota for female representation, although even this feature sometimes proved controversial during debates ahead of the vote. Yet Egyptian lawmakers still voted to approve the changes by 531 votes out of 596, triggering the referendum.

But it was the speed of the vote that was remarkable, even if the occurrence of a referendum was no surprise following the introduction of the bill of amendments in early February.

Egyptian MPs voted to trigger a referendum on Tuesday — the amendments require the referendum to become law — and the National Electoral Commission announced the date the following day. By Saturday, Egyptians were at the ballot boxes once again, one year since el-Sissi was last sworn in.

"Everyone in the end will say what they want, what they believe. This is a democracy," said 26-year-old Mohamed Shafiq, who thought the changes were "good for the country."

Others put it differently. "There is no competition. Even people dissatisfied with the country know that el-Sissi continuing means the country will prosper," said bookshop owner Ashraf Mohammed, who said he will vote in favor of the amendments.

"Even if el-Sissi wants another five, 10, 20 or 50 years — as long as people agree, why shouldn't they change the constitution? Look at Angela Merkel: Who did she stay in power for? For the good of the people," he said, comparing el-Sissi with the German chancellor.

Public support for a no vote was difficult to find, after opposition campaigners said they were threatened and even faced detention. Ten members of the liberal Dostour, or Constitution party, were arrested for voicing their dissent.

The opposition Civil Democratic Movement, a coalition of liberal and left-leaning parties set up to oppose the changes, said it had been prevented from publicly campaigning and was not granted a permit to protest in front of the Egyptian parliament.

"The dates for voting were set days after the amendments were approved by the parliament," said Khaled Dawoud, of the Civil Democratic Movement. "While the state launched its own campaign, filling the streets with banners and advertisements on TV [to encourage a yes vote — Ed. note], our members were arrested and we had no access to local media at all."

Egyptian authorities also blocked 37,000 websites in a bid to prevent access to an online petition gathering signatures against the changes, according to the web monitoring organization NetBlocks.

"Between the passing of the final text by parliament and the first day of the national referendum, Egyptians will have had less than 72 hours and 96 hours, depending on whether they are abroad or inside the country, to read, understand and form an opinion about the constitutional amendments," said Mai El-Sadany, an Egyptian law expert at the Tahrir Institute for Middle East Policy (TIMEP).

"The referendum was effectively rigged long before a single voter reached the polls," said Timothy Kaldas, TIMEP's expert on regime survival strategies. "Opposition figures who sought to organize a campaign against the amendments were arrested; others were phoned and warned not to speak out.

"Reporters Without Borders ranks Egypt 161 out of 180 countries in press freedom. The public has had access to zero serious debate over the amendments in the media and thus haven't been given the opportunity to understand and consider any potential drawbacks to the proposed amendments," said Kaldas.

Al-Aswany has come under fire for criticizing government corruption and nepotism. At the center of the charges are articles he wrote for DW and his latest novel about the military's role in the el-Sissi administration. (19.03.2019)

Election in Egypt: 'El-Sissi is on the side of the autocratic rulers'

The Egyptian regime has promised fair elections, but el-Sissi is sure to be re-elected, says Middle East expert Günter Meyer. The sole opposition candidate is to give the impression that the election is a democratic one. (26.03.2018)