Lawmakers have approved constitutional amendments allowing Abdel-Fattah el-Sissi to stand for a third term as well as extending presidential terms, pending a referendum. Critics warn of a slide into authoritarianism. 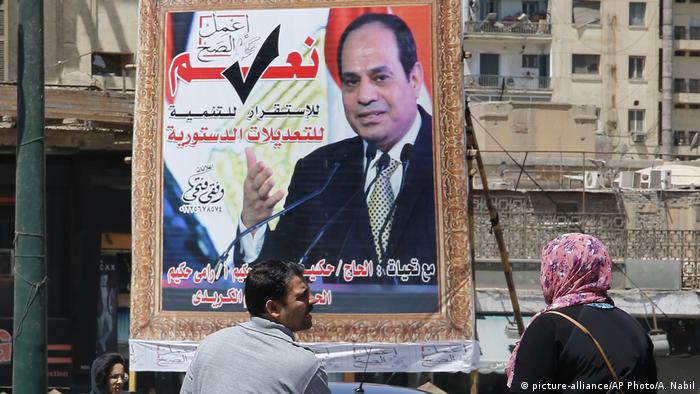 Egypt's parliament on Tuesday voted to pass amendments to the country's constitution that could allow President Abdel Fattah el-Sissi to remain in office until 2030.

The 596-member body, which is stacked with presidential supporters, voiced overwhelming support for the changes in February before formally approving them in the Tuesday vote. These will now be the subject of a national referendum that will likely take place before the start of the Islamic holy month of Ramadan on May 5.

Tuesday's vote was based on a reworded bill finalized by the Constitutional and Legislative Affairs Committee, which included an exception to allow el-Sissi to serve a third term.

Should the referendum pass, presidents would be allowed to serve two, six-year terms. El-Sissi's current second term would, in turn, be extended from four to six years. He would then be allowed to stand for re-election in 2024.

El-Sissi, a former general, ascended to power in 2013, when Egypt's first freely elected Islamist president, Mohamed Morsi, was driven from office in a military coup. He was then elected president in 2014 and re-elected in a flawed 2018 vote in which serious challengers were arrested or pushed out of the race.

Although his supporters welcomed the result of Tuesday's vote, saying it would bring Egypt "political justice and the required stability," critics called it "a disgrace," saying it paved the way for authoritarianism.

Other changes would allow the president to appoint top judges and ignore judicial oversight when considering draft legislation. The amendments would also grant more power to the military as the "guardian and protector" of the state. Moreover, the military would be given far-reaching powers to try civilians in its courts.

Human Rights Watch (HRW), an NGO, has said that more than 15,000 civilians, some children, have been sent to military courts for prosecution over the past three years.