Election in Egypt: 'El-Sissi is on the side of the autocratic rulers'

The Egyptian regime has promised fair elections, but el-Sissi is sure to be re-elected, says Middle East expert Günter Meyer. The sole opposition candidate is to give the impression that the election is a democratic one. 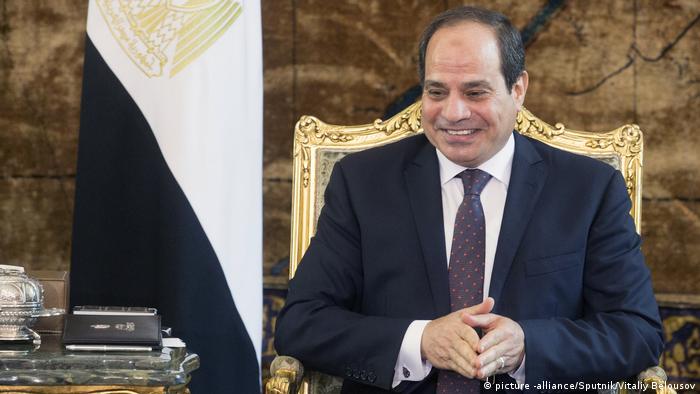 DW: On March 26, Egyptians will elect a new president. Alongside the incumbent, President Abdel-Fattah el-Sissi, there is only one opposition candidate, and he makes no bones of his support for el-Sissi. What's going on?

Günter Meyer:The current political system in Egypt is often characterized as a façade democracy. The main aim of these election preparations is to secure a landslide victory for ex-field marshal Abdel-Fattah el-Sissi. Opposition candidates disappear off to prison, or are put under such pressure that they withdraw their candidacy. The only remaining opposition candidate has no desire to become president; his purpose is just to create the appearance of a choice between two candidates. There is therefore no doubt that the current president will win a landslide victory — just as was customary for Mubarak and his predecessors before the "Arab Spring."

Why have el-Sissi's policies disappointed his voters?

After the brief rule by the Muslim Brotherhood under President Mohammed Morsi, everything was supposed to get better under el-Sissi. Those were the overblown promises. Actually, though, the economic situation for most Egyptians has become worse. Spectacular and extremely costly mega-projects — like the construction of a new administrative capital, and the expansion of the Suez Canal — have massively increased government borrowing. The Egyptian government was forced to ask the International Monetary Fund (IMF) for emergency aid. However, the pledges of $21 billion (€17 billion) from the IMF and other creditors were linked to an obligation to carry out radical economic structural adjustments. In order to bring down government spending, subsidies for utilities such as gas and water had to be cut, as did civil servants' wages and salaries, which were already very low.

At the same time, VAT was introduced to increase government revenue. This pushed up prices; as did the devaluation of the Egyptian currency, which caused a rise in the prices of imported goods. The result was a drastic increase in the cost of living. Added to this you have high unemployment, which affects young people above all, especially university graduates, many of whom have no chance of finding a professional position for which they are qualified.

If we take a look at el-Sissi's past four years overall, where was he successful and where did he fail?

The president's biggest success was that, by fighting the Muslim Brotherhood, he managed to secure the financial support of the oil-rich Gulf states, in particular Saudi Arabia and the United Arab Emirates. More than 1,000 supporters of the Muslim Brotherhood were killed and tens of thousands arrested when the protests against the ousting of President Morsi were suppressed. By doing this, el-Sissi positioned himself on the side of the autocratic rulers in the Arab world who see the Muslim Brotherhood's political Islam as the biggest threat to their rule. He was rewarded with big investments from the Gulf states to finance large-scale projects in Egypt. But in return he ceded two islands in the Red Sea, Tiran and Sanafir, to Saudi Arabia; this led to nationwide protests and considerably damaged his popularity, even though the media — the majority of which is state-controlled — did its best to justify this loss of Egyptian national territory.

Another point against him is the continued deterioration of the domestic security situation. This is true not only of the Sinai peninsula, where large sections of the native Bedouin population see the Egyptian security forces as an occupying power: They're fighting them, and are being supported by jihadists from "Islamic State." Many hundreds of people have already been killed in terrorist attacks on the police, the army, and religious minorities like Christians and Sufis. Now this wave of terrorism has spread to other parts of the country, too: Cairo, Alexandria, the [Nile] Delta, and Upper Egypt. Egypt is therefore by no means a safe country for travelers, resulting in a dramatic drop in tourism and the loss of a great many jobs.

So the security guarantees people expected from a military man like el-Sissi could not be redeemed. And on the other hand the prisons are overflowing with critics of the regime. There are now far more in jail than there were under Mubarak.

Amnesty International has just reported that the already difficult human rights situation has intensified in advance of the election. It's calling for explicit criticism from the German government. Why are the Western states so silent with regard to Egypt?

Economic and political interests are the main issues here, starting with the United States, which has supported the Egyptian regime for years, with billions of dollars to buy American weapons in order to stabilize the relationship with Israel. The other Western states, particularly Germany, are interested in the Egyptian market. A lot of German companies have got involved in Egypt. As a result, there is considerable interest in not jeopardizing these relations. Any criticism on the German side is expressed very quietly, at best; and Egypt, as a friendly regime, is allowed to do as it pleases. Just like under Mubarak, human rights issues scarcely get a look-in compared with these economic and political interests.

Günter Meyer is director of the Center for Research on the Arab World at the University of Mainz.

The six suspects were militants from the Hasam Movement which aims to overthrow the government. The attack happened two days before an election which President Abdel-Fattah el-Sissi is expected to win. (25.03.2018)

The explosion took place as the convoy of Alexandria's security chief, General Mostafa al-Nimr, passed by. At least one policeman was killed and four others were injured in the bombing. (24.03.2018)