Dutch Defense Minister Ank Bijleveld-Schouten said the actions were "irresponsible" and that her country will address Russia about this. Russia denied that the jets flew too close to the ship. 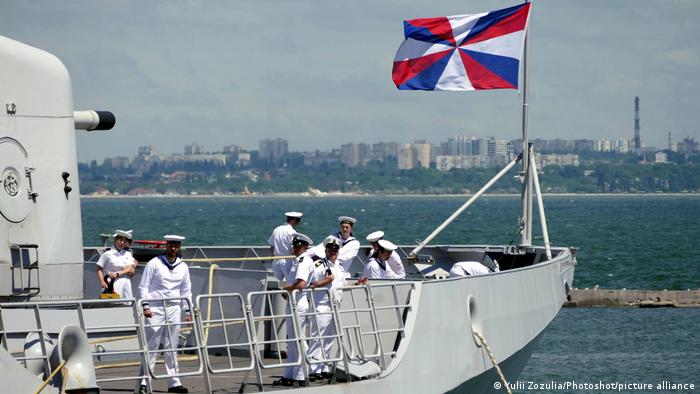 The Netherlands slammed "mock attacks" by Russian fighter jets on a Dutch warship in the Black Sea as "aggressive" and "irresponsible" on Tuesday.

The Dutch Defense Ministry said the Russian planes had "repeatedly harassed" the HMNLS Evertsen last Thursday, in actions which it considered "unsafe."

The Evertsen frigate had been sailing with the British destroyer HMS Defender that Russia claimed to have fired warning shots at a day before the alleged incident with the Dutch ship.

The Dutch Defense Ministry said that Russian jets "flew dangerously low and close by, performing feint attacks" on the Evertsen warship as it sailed through waters claimed by Russia.

A day prior, Russia reportedly fired warning shots at the HMS Defender and dropped four bombs on its proposed route. The UK′s Ministry of Defense, however, denied these reports.

How have both countries reacted?

Dutch Defense Minister Ank Bijleveld-Schouten said the Russian military's actions were "irresponsible" and that his country "will address Russia about this."

"The fighters were armed with bombs and so-called air-to-surface missiles," her defense ministry said in a statement. "After hours of intimidation, disruptions to electronic equipment of the Evertsen also took place."

Bijleveld-Schoutensaid the "Evertsen has every right to sail there," and added that there was ″no justification for this kind of aggressive act, which needlessly increases the chance of accidents.″

The Russian Defense Ministry said it had scrambled fighter jets and bombers to stop the Evertson entering Russian waters in the Black Sea, the state news agency Interfax reported.

However, the military said it flew at safe distance from the frigate.

Why is this a sensitive area?

Russia annexed the Crimean Peninsula from the Ukraine between February and March 2014, prompting global condemnation and ejection from the G8.

Unmarked troops, which were later identified to be Russian, moved in on key buildings in Crimea and established a new government loyal to Moscow.

This gave Russia a much bigger grip on the Black Sea which is also bordered by Turkey, Romania, Bulgaria and Georgia.

In April,Russia restricted NATO warships from visiting the area around Crimea until November.

What's behind Putin's troop maneuvers at the Ukraine border?