US and allies begin large-scale naval drill in Black Sea

The biggest ever "Sea Breeze" exercises come days after Russia said its navy had fired warning shots against a British warship to chase it out of Black Sea waters. 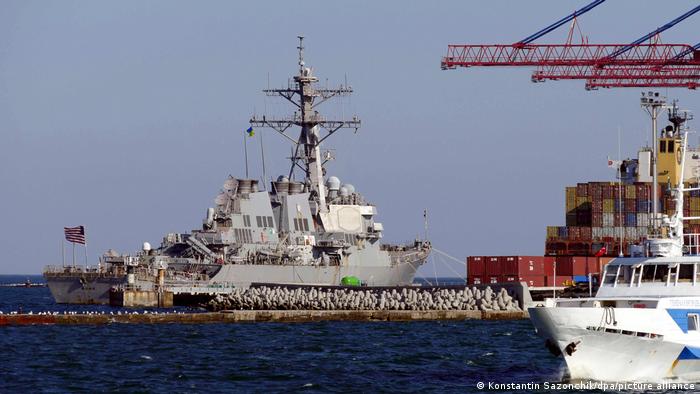 On Saturday, the Russian navy reportedly closely monitored the US destroyer USS Ross as it entered the Black Sea

A total of 32 countries began conducting military exercises in the Black Sea Monday, despite sharp criticism from Russia.

The US and Ukraine are leading the "Sea Breeze" drills. They are scheduled to last for two weeks, according to the US military.

Ukrainian navy commander Oleksiy Neizhpapa said during an opening ceremony in Odessa that the exercises would send a "powerful message to maintain stability and peace in our region."

But the Russian Foreign Ministry described the exercises as a provocation and alleged that they were being used to transport weapons and military equipment into Ukraine.

The military exercises and relations with Russia

The exercises come days after Moscow said its navy had fired warning shots and dropped bombs in the path of a British warship to chase it out of Black Sea waters off the coast of Crimea.

Russia said the British navy ship violated its territorial waters. The UK rejected Moscow's account of the incident and said the ship was making "an innocent passage through Ukrainian territorial waters in accordance with international law."

Russia annexed Crimea from Ukraine in 2014. However, many nations worldwide do not recognize the annexation and consider the region to be part of Ukrainian territory.

How big are the Sea Breeze exercises?

Thirty-two countries from six continents are participating in this year's exercises. That represents the largest participation in the history of the drills, which have been taking place annually since 1997.

Over 5,000 troops, 32 ships and 40 aircraft, as well as 18 special operations and dive teams, are involved this year.

They are said to focus on areas such as amphibious warfare, diving operations, air defense and anti-submarine warfare, among other things.

On Saturday, the Russian navy closely monitored the US destroyer USS Ross as it entered the Black Sea, the Interfax agency reported, citing the Russian Defense Ministry.