President Donald Trump has praised Hungary's action on curbing migration, saying Prime Minister Viktor Orban had "kept Hungary safe." Orban said he was proud to fight illegal migration and terrorism alongside the US. 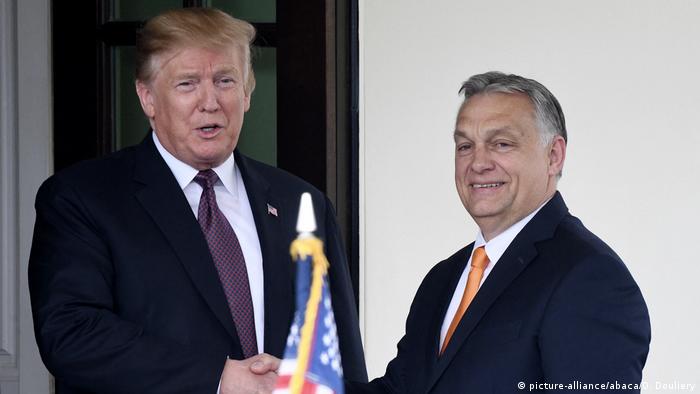 US President Donald Trump and Hungarian Prime Minister Viktor Orban met at the White House in Washington on Monday with plans to discuss trade and energy issues, as well as weapons sales.

Speaking to media at the White House, Trump said the US "relationship is very good with Hungary."

"I know he's a tough man, but he's a respected man," Trump said, adding that people should look at some of the "tremendous" problems Europe is facing because "they've done things differently" to Hungary.

Orban said Hungary was proud to join the US in "fighting against illegal migration," as well as on terrorism and protecting Christian communities.

Like Trump, right-wing Orban has taken a hard line against migration. Orban has said he hopes he and Trump can coordinate that stance into a global alliance.

Hungary's foreign minister told state radio on Sunday that an anti-migration alliance was being formed and noted that Hungary and the US were among a handful of countries that last year opposed a United Nations migration pact.

The timing of the meeting, less than two weeks ahead of European elections in which Orban and his Fidesz party are becoming a thorny issue, raised some eyebrows in Europe.

The meeting could also be seen as an attempt to discourage Hungary from strengthening ties with Russia and China.

Orban said he had not been in the US for 20 years. Former US President Barack Obama did not welcome Orban, and similarly his predecessor George W. Bush did not welcome a Hungarian prime minister.

Ahead of the meeting, senior Republican and Democratic members of the US Congress told Trump they were concerned about Hungary's "downward democratic trajectory."

"In recent years, democracy in Hungary has significantly eroded," Republican Senate Foreign Relations Committee Chairman Jim Risch and Bob Menendez, the panel's top Democrat, said in a letter to Trump. "Under Orban, the election process has become less competitive and the judiciary is increasingly controlled by the state."

Several Democratic members of the House of Representatives, led by House Foreign Affairs Committee Chairman Eliot Engel, called on Trump to cancel his meeting with Orban, citing similar concerns as well as his anti-Semitic and xenophobic comments.

Once an ally of the American-Hungarian Jewish financier George Soros, who paid for his university education in the UK, Orban now regularly criticizes the US-based philanthropist.