Which way is Europe heading?

A bitter political battle over Europe's future is being fought across the EU between populists and liberals, left and right. On DW's Conflict Zone, four politicians from across the divide clash over the key issues.

The fissures in European politics run deep. So deep, in fact, that competing visions over the direction of the EU are threatening its very existence. 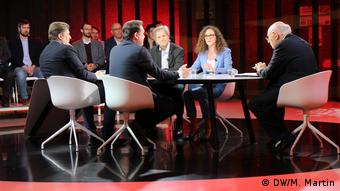 In an often ill-tempered debate in Brussels on Tuesday, hosted by DW's top political show Conflict Zone, the stark divides in Europe were argued over by four politicians keen to demolish the opposition case or undermine it with accusations of being based on falsehoods or even "fake news."

Maximilian Krah of Germany's far-right populist party, Alternativ für Deutschland (AfD), took on the liberal Dutch MEP Sophie in 't Veld with this very charge over her statement that Viktor Orban, Hungary's Prime Minister, was "starving migrants to death and locking them up in containers." 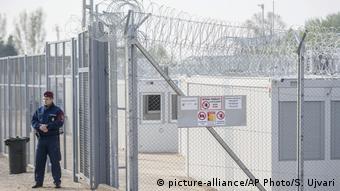 Human rights groups have been critical of Hungary's "zero tolerance" approach to immigration. The government says Hungarians "have declared their opinion and their will: they do not want to live in an immigrant country"

Socialist MEP Jo Leinen had strong words too for Dominik Tarczynski of Poland’s ruling Law and Justice Party (PiS) when the Polish MP claimed that German Chancellor Angela Merkel's refugee policy had been based on Germany needing cheap labour. "It's really hard to listen to such … nonsense," said Leinen, "but okay, that's democracy."

The wide-ranging debate covered freedom of speech, immigration, democracy, inequality and more over nearly an hour, ahead of European Parliament elections later this month. 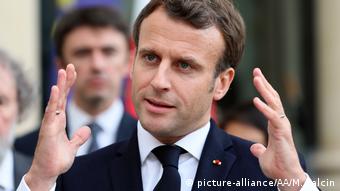 Representing two sides of what French President Emmanuel Macron has called a "civil war" in Europe, the politicians were invited to the studio in the European Parliament to make their case in front of an audience drawn from across civil society, some of whom had the chance to direct their own questions to the panel.

And their questioning too reflected a wide range of worries and the fears of those working for charitable and advocacy organizations under hostile circumstances.

Andrew Stroehlein, European Media Director at Human Rights Watch, confronted the populist group on the panel, Dominik Tarczynski and Maximilian Krah, saying, "You want a Christian Europe. Where does that leave those of us who aren't Christian? Are we second class citizens?"

"I don't want Islamization of Europe. I don't want terrorism in Europe. There are no Christians who are shouting Christ is the lord before they blow themselves up," said Tarczynski.

But Stroehlein also directed frustration at the other panelists over how they planned to face down "the madmen this time so we don't have a repeat of last time?"

Centrist, pro-European forces, said Sophie in 't Veld, had been too technocratic and too afraid to stand up for "the Europe of values" that she wants to promote, inviting a further interjection from Dominik Tarczynski: "That's why you are going to lose this election. You're going to lose it." 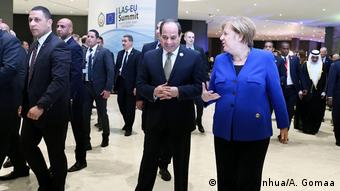 On European values, host Tim Sebastian challenged long-serving MEP Jo Leinen on whether the EU was really leveraging its power as the world's largest trading bloc to defend its values. "You talk a lot about human rights for instance," said Sebastian. "In Egypt, you continue to sign trade deals with them. You don't use the power that you have, do you?"

"We are the biggest market in the world, but politically we are a dwarf. And indeed we have to really improve in our political outlook towards the world," said Leinen.

Alexandrina Najmowicz, Director of the European Civic Forum, asked the liberal panelists for their policies to respond to states who were building "collective identities based on exclusion" and shrinking "the space for dissent"?

Jo Leinen said the immediate challenge was to "put the social dimension of our European politics in the center," but he disagreed that countries that don't abide by EU rules should have their funding cut.

The opposing parties on the panel also clashed over immigration, with Poland's Dominik Tarczynski defending his vision of a Christian Europe.

"What I don't want is a new structure of the society without Christianity. I don't like people messing around, like Mr. Soros. He's playing with the nations. He's financing organizations who are absolutely anti-Christian," he said. 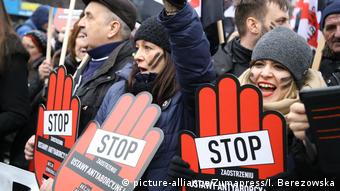 Protestors in Poland have marched against threats to tighten abortion laws. The Council of Europe has said the country's restrictions on reproductive rights were "retrogressive"

In response to Sophie in 't Veld's challenge that nationalist and extremist parties attacked women's rights and gay rights, the AfD party's Maximilian Krah told the opposing panelists that those rights were "now under attack because of the Muslim immigration that you orchestrate into Europe."