The US president has said his French counterpart's comment about the need to create an EU army was "very insulting." Trump is set to take part in ceremonies in France to mark the 100 years since the end of World War I. 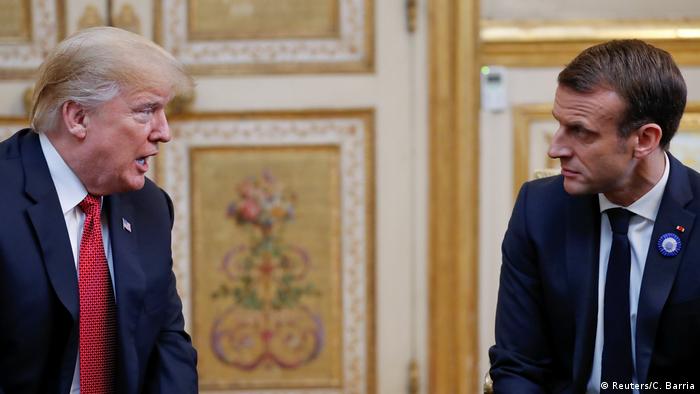 US President Donald Trump on Friday took a jab at French President Emmanuel Macron for his proposal to build up a European army to counter threats from global powers, including the US.

Trump, who arrived in Paris to take part in events marking the 100th anniversary of the armistice that ended World War I, tweeted that Macron's comment was "very insulting."

"President Macron of France has just suggested that Europe build its own military in order to protect itself from the US, China and Russia," the US president tweeted, referring to remarks made by Macron three days earlier.

"Very insulting, but perhaps Europe should first pay its fair share of NATO, which the US subsidizes greatly!" he added. Trump has repeatedly complained that NATO allies are not contributing enough towards the alliance's defense budget and relying heavily on the US.

Trump and Macron meanwhile began talks at the Elysee Palace on Saturday. The two leaders are expected to discuss European concerns about Trump's plans to withdraw the US from the Intermediate-Range Nuclear Forces (INF) treaty and renewal of US sanctions against Iran.

Ahead of the talks, Macron said he agreed with Trump that Europe should share more of the burden in NATO. Trump, in his turn, said that the US still wanted to help with European defense, but that burden-sharing had to be "fair."

Macron said in a radio interview earlier in the week that the European Union needs to protect itself against "China, Russia and even the United States."

"Confronted by Russia, which is on our borders and which has shown itself willing to be threatening, we need to have a Europe that can better defend itself by itself and in a sovereign way, without depending solely on the United States," he told Europe 1 broadcaster.

Macron told Europe 1 radio that the "main victim" of the US withdrawal from the INF accord was Europe and its security.

France is leading a 10-country defense initiative in a bid to "face new threats" outside existing structures. Germany is wary that the project could entangle its military in foreign interventions and undermine the EU. (08.11.2018)

Donald Trump: 'Nobody treats us much worse than the EU'

The comments targeting the trans-Atlantic relationship come as US-EU trade negotiations are in an early stage. In July, the two sides agreed to de-escalate a brewing trade fight. (15.10.2018)