The German lender is planning to cut thousands of jobs and shed whole business lines as part of a major reorganization. Analysts say cost cutting alone is not going to rid Deutsche Bank of its current woes. 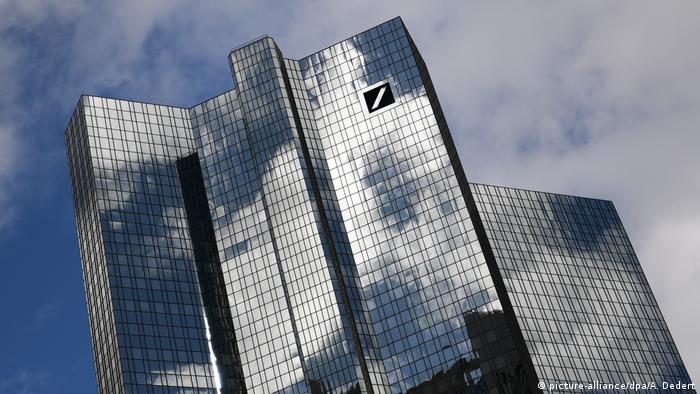 Less than a decade after giving its US rivals — then reeling from the global financial crisis — a run for their money, Deutsche Bank is significantly scaling back its global ambitions.

The troubled German lender is planning to cut 15,000 to 20,000 jobs — about a fifth of its global workforce — as Chief Executive Christian Sewing seeks to stop the bleeding at the lender's beleaguered investment banking division, which contributed more than half of the bank's revenue last year.

The bank is also in talks with Citigroup, BNP Paribas and others to sell parts of its once-prized US equities business, the Wall Street Journal reported on Tuesday. The business posts annual pre-tax losses of €200 million ($225.8 million) to €300 million, according to a JP Morgan estimate.

Deutsche, which was the world's biggest bank by assets at its peak, is reported to be working on setting up a so-called bad bank to house between €30 billion and €50 billion of riskier assets.

The measures are part of Sewing's efforts to turn around the investment bank, which has struggled to post sustainable profits since the 2008-09 financial meltdown and has seen its share price tank to record lows, hit by a succession of scandals, regulatory troubles, higher funding costs, talent drain and a failed merger with smaller rival Commerzbank.

"DBK's [Deutsche Bank's] equity operation has been underperforming its peers, as well as other part's DBK's IB [investment bank] for an extended period," Goldman Sachs analysts said in a note to clients. "We would see downsizing of equities as acknowledging a new revenue reality, rather than a preemptive move."

The analysts estimate that the planned job cuts, which will mainly affect Deutsche's investment banking division and its US unit, will help Deutsche save €1.9-2.5 billion in costs but would lead to a "meaningful" loss in revenue. The job cuts would also yield between €1 billion and €4 billion in restructuring charges, they said.

The restructuring is expected to delay further some of the bank's goals, including achieving a return on tangible equity — a key profitability target — of 4% this year. Deutsche reported a return on equity of 0.5% in 2018 compared with JPMorgan's 12.6% and Citigroup's 9%.

Most analysts reckon that getting rid of expensive staff and downsizing loss-making businesses is a step in the right direction for Deutsche, valued at just a quarter of book value. But they warn that job cuts alone will not restore the lender's health. After all, successive Deutsche CEOs have axed staff in an unsuccessful bid to rein in costs and shore up profits.

"Strategic end-game as yet unclear, to us," Goldman Sachs analysts wrote in a note to clients. "We continue to see Deutsche Bank's main strategic challenge as being the absence of a high-return platform."

Deutsche is pinning its hopes on its transaction banking — the best-performing division at Deutsche for several years now — and asset management divisions.

In May, Sewing told investors that Deutsche had "frequently paid too little attention" to its transaction bank, which facilitated financing for companies' global trading activities and manages cash for firms and governments.

Deutsche's ambitions for transaction banking are likely to be tested in an increasingly difficult global trading environment driven by a rise in populism globally. The bank will also have to deal with competition from nimbler fintech companies, which have driven down margins by offering faster and cheaper payment services.

Sewing is also pivoting to the bank's asset management business, separately-listed DWS group, which contributed less than 10% of the lender's revenues in 2018. The chief executive wants DWS to become "one of the world's top 10 asset managers" — an ambitious target in an industry which is becoming increasingly crowded as more and more banks scale down riskier activities in favor of managing the rapidly growing wealth.

Deutsche's plans could get a boost if it finds a partner for DWS. The bank has held talks with Swiss bank UBS Group about merging their asset management businesses. The merger talks are said to have stalled.

With the scaling back of its investment banking operations, a lot of Deutsche's success would depend on the performance of its legacy retail banking division, which generates the bulk of its revenue from Germany.

The business has struggled to grow amid cut-throat competition in the crowded home market and negative interest rates.

After years of indecision over the fate of its Postbank unit, which it acquired in 2010 and sought to dispose in 2016, Deutsche Bank now intends to integrate it with its own retail business with the aim of saving at least €900 million annually.

"The Retail Banking franchise is large and performs well, but it has been underexploited in the past so there is definitely some potential there, which can only get better with the Postbank integration," Fitch analyst Patrick Rioual told DW. "Although the German market is highly competitive, retail is an area offering stronger opportunities for banks to earn money in Germany. If Deutsche manages to streamline its product offering and continues to cut costs, it should be able to mitigate the pressure that comes from competition and low interest rates."

Ratings agency Fitch downgraded Deutsche's long-term debt last month, citing "difficulty and limited progress in improving its profitability and stabilizing its business model." It said its outlook for the bank was "evolving," reflecting the uncertainty surrounding the outcome of Deutsche's reorganization efforts.

One of Deutsche Bank's biggest problems has been its antiquated technology infrastructure. The lender has lagged behind its rivals in investing in IT upgrades.

"If Deutsche Bank is to escape from mediocrity, it will need substantial investment, especially in technology: its vast spaghettilike heap of ancient IT systems seriously impedes its ability to compete with newer, more nimble entrants," banker-turned-financial-writer Frances Coppola wrote in a column for Forbes business magazine.

"Sadly, the level of technological investment that is needed does not seem to feature on the management's agenda," she wrote.