Chief executive Christian Sewing has promised to speed up the embattled bank's "transformation," as he faced disgruntled shareholders and activists in Frankfurt. 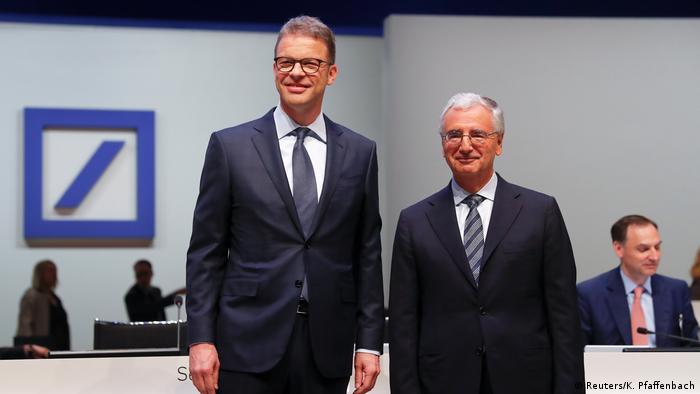 The chief executive of Germany's biggest but flailing bank, Christian Sewing, sought to reassure investors at Deutsche Bank's annual general meeting (AGM) that management was "prepared for tough cutbacks" and that he would "speed up the transformation" by focusing on "profitable and growing areas."

Sewing, who took the reins from John Cryan last year, believes there is "still a lot of potential" in private and corporate banking.

However, more cuts were needed, he said, to its ailing investment banking unit, which consumes most of the bank's capital and has been at the heart of various trials and fines for, among other offenses, money laundering. The unit has also failed to catch up with its much bigger US rivals, particularly in investment banking.

Sewing also emphasized that Deutsche was to become more sustainable in its approach by reducing investments in fossil fuel projects. "We're working on specific targets," he told shareholders, possibly looking to assuage protesters who had gathered outside the venue.

US cuts to equity business

Some of the proposed changes include the Deutsche Bank plan to cut its US equities business, including prime brokerage and equity derivatives, to win over shareholders not satisfied with its performance, sources familiar with the matter told Reuters news agency.

A big part of the bank's anticipated US cuts will come from its money-losing equities business, which includes cash equities trading. The bank has also earmarked US rates trading for further reductions.

It is not clear how many of Deutsche Bank's 9,275 US employees will be affected by these measures, the sources said.

Deutsche Bank officials had previously denied reports they planned a further US restructuring.

In a statement released ahead of the AGM, supervisory board head Paul Achleitner said that Sewing had the full support of the board and that the bank "despite all the difficulties is on the right track," pointing to the first annual profit in four years in 2018.

Achleitner has been in his current post since 2012 and has seen four CEOs trying to turn the bank's fortunes around. He has come under repeated fire, with some shareholders again accusing him of a lack of leadership and demanding his resignation during the AGM.

The bank is also still reeling from failed merger talks with fellow German bank Commerzbank at the end of April.

Deutsche Bank's share price dropped to a record low on Thursday. It has declined more than 40% in the last year alone. Shares closed at €6.46.

US President Donald Trump has failed in his legal attempt to stop Congress subpoenas to force Deutsche Bank to release his financial details. The German bank reportedly lent Trump over $2 billion in the last 20 years. (23.05.2019)

Opinion: Deutsche Bank — the decline of an icon

Once again, Deutsche Bank has a new man at the helm. Once again, it’s hoped that his appointment will make everything better. The task he is facing? Nothing less than staving off collapse, says DW's Henrik Böhme. (09.04.2018)