US President Donald Trump has failed in his legal attempt to stop Congress subpoenas to force Deutsche Bank to release his financial details. The German bank reportedly lent Trump over $2 billion in the last 20 years. 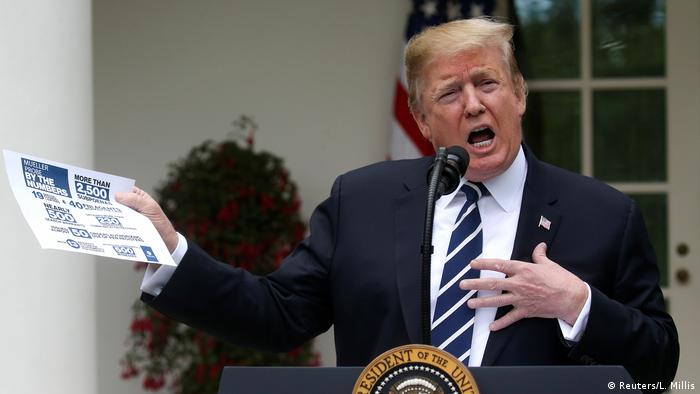 US President Donald Trump has lost a legal battle to block Congress from subpoenaing his financial records from two banks. The president also said he would not work with the House unless it stopped investigating him or his finances.

New York District Judge Edgardo Ramos ruled on Wednesday that Trump, his family, and his company were "highly unlikely" to succeed in a lawsuit claiming that the subpoenas by Democratic lawmakers were unconstitutional. Ramos said the subpoenas have "a legitimate legislative purpose."

The move could mean that Deutsche Bank and Capital One, two banks that Trump has borrowed millions of dollars from, may be forced to release their documents on the president.

A 2017 disclosure form showed that Trump had had at least $130 million (€116 million) of liabilities to Deutsche Bank alone, with the new subpoena seeking more records of accounts, transactions and investments linked to Trump, his immediate family and their various businesses.

The New York Times has reported that Trump owed Deutsche Bank some $300 million when he was inaugurated in 2017. The bank has said it would comply with subpoenas.

The lawyers for the Congress' House Financial Services and Intelligence committees said they needed access to documents from the banks to investigate possible "foreign influence in the US political process" and possible money laundering from abroad.

In response, Trump's lawyer Patrick Strawbridge, told the judge that it was "probably a safe bet" that the president would appeal. A complaint filed in April by Trump's lawyers argued the subpoenas were "overbroad," and that the Democrats were using them just to "stumble on something" that could be used in a political attack.

The president had already lost a similar case in a federal court in Washington this week, when a judge found that Trump could not block a Congress subpoena for information from a financial services firm that had done some accounting for him. In response, the president called the decision "crazy" and pointed out that the judge, Amit Mehta, had been appointed by his predecessor, Barack Obama.

Ahead of Wednesday's hearing, lawyers for two congressional committees wrote in a submission that Trump's attempts to block subpoenas were "flatly inconsistent with nearly a century of Supreme Court precedent."

Democratic lawmakers welcomed the decision. "So far, I think the president would be wise to come to the realization that our legitimate areas of inquiry are going to be supported by the courts," Michigan Democrat Representative Dan Kildee told Reuters.

Trump's relations with the legislative branch got even worse on Wednesday when he broke off a bipartisan meeting in the White House over plans to improve infrastructure in the US. Nancy Pelosi, Speaker of the House of Representatives, had angered the president before hand by saying he was "engaged in a cover-up."

In a hastily-arranged press conference Wednesday, Trump said he was "the most transparent president probably in the history of this country," before adding that he couldn't carry out infrastructure discussion "under these circumstances, so get these phony investigations overs with."

After the meeting Pelosi sent a letter to colleagues saying Trump had "had a temper tantrum for us all to see" over the investigations.

Donald Trump owes hundreds of millions to Deutsche Bank in connection with past real estate deals. Some politicians who are not fans of the president are blowing smoke hoping people will think there's a fire. (01.09.2017)