Germany's biggest private lender has announced it's laying off more employees than originally planned as it looks to retreat from equities markets across the world in a sweeping overhaul launched by its new CEO. 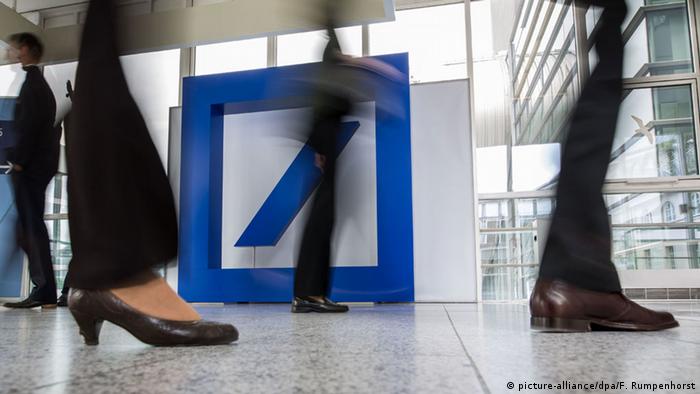 Shortly before its annual shareholder meeting on Thursday, Deutsche Bank announced it would cut an additional 7,000 jobs by 2019 in a bid to make the lender profitable again.

"The number of full-time positions is expected to fall from just over 97,000 currently to well below 90,000; the associated personnel reductions are underway," Deutsche said in a statement.

The bank said the job cuts would hit its equities sales and trading division, which was expected to lose 25 percent of its workforce. "We remain committed to our Corporate and Investment Bank and our international presence — we are unwavering in that," CEO Christian Sewing said Thursday. "However, we must concentrate on what we truly do well."

The bank added it would slash leverage exposure in the investment arm by 10 percent.

Read more: Opinion: Deutsche Bank — Is this the last bullet?

The news was first reported by the Wall Street Journal (WSJ) on Wednesday, saying that the workforce reduction was part of stepped-up cost-cutting efforts by the bank's new chief executive Christian Sewing.

Under Cryan, the bank had a previous target of 9,000 cuts by 2020, though the Frankfurt-based lender may have made less than a third of those cuts.

Thursday's announcement comes after weeks of debate over how fast and deep job losses at the struggling German lender should be. Plans for fewer layoffs had divided senior executives and left investors unconvinced, people familiar with internal bank discussions told WSJ. Deutsche Bank declined to comment on questions from several news media.

Shares in Germany's biggest private lender have fallen 31 percent this year, sparking calls from investors to speed up the recovery process.

Hans-Christoph Hirt, head of shareholder adviser Hermes EOS at Hermes Investment Management, told Reuters on Wednesday he wanted to see a "credible strategy with achievable targets," adding that it was critical that the recent CEO appointment "works out."

Christian Sewing — a Deutsche Bank lifer with a background in audit, risk control and retail banking — is aiming to refocus the lender on its European home market and reverse a two-decade effort to compete with US rivals in investment banking.

Newspaper reports said Sewing was planning to sharply reduce Deutsche Bank's presence in the US market and to start cutting activity in the Central Europe, Middle East and Africa region (CEEMEA).

Bloomberg said that the decision was the result of a "wide-ranging review of the bank's global equities business." Part of the plan was a decision to scale back the bank's business services for hedge funds, as the trading of stocks would also be affected.

Among those to leave the bank are London-based head of CEEMEA equity sales Darren Veenhuis, as well as Pascal Moura, who runs equity research for the region from Dubai.

The CEEMEA desk specializes in trading emerging-market securities and had been singled out as one area where Deutsche Bank needs to reassess how it competes with other investment banks, the people said.

Deutsche Bank's supervisory board and senior executives will confront investors Thursday in Frankfurt at its annual shareholder meeting. They will face a proposal to break up the company and probing questions about last month's chief executive handoff.

The lender is also under pressure from credit ratings agencies after losing much of its credibility and billions in fines as a result of the 2008/2009 financial crisis. Standard & Poor's is expected to say by the end of the month whether it will cut Deutsche Bank's rating after putting it on "credit watch" in April.

Defying 6 years of losses, the German lender has just posted a net profit for 2020 and set aside provisions in case of creditor defaults.