Espionage, money laundering and interest rate scams. Germany's biggest lender has a global reputation for scandal – and has paid hefty fines and expensive settlements to make up for its wrongdoings. 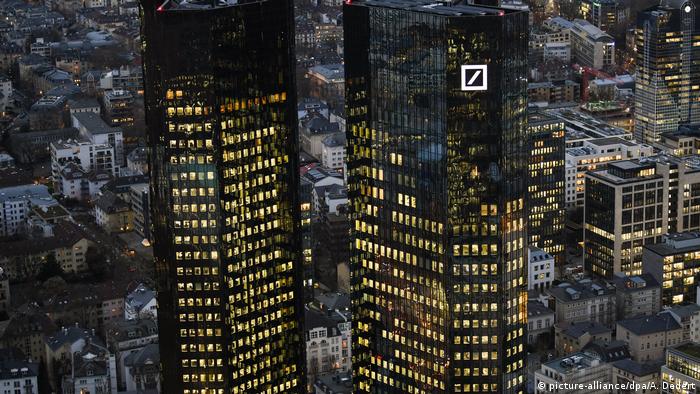 The claims had first surfaced in the "Panama Papers" investigation, published by an international consortium of journalists in 2016.

But the German lender isn't new to criminal investigations, fines and settlements. That's why it's share price has slid from almost €90 before the 2007/8 financial crash to €8.25 in trading on Thursday. Here's a quick look at five of the biggest snafus in recent years to hit Donald Trump's bank of choice.

In 2017, Deutsche Bank was fined a total of $630 million (€553.5 million) by US and UK financial authorities over accusations of having laundered money out of Russia.

According to US and British regulators, Deutsche Bank's anti-money laundering control mechanisms failed to spot sham trades with a value of up to $10 billion, not knowing who the customers involved in the trades were and where their money came from.

"These flaws allowed a corrupt group of bank traders and offshore entities to improperly and covertly transfer more than $10 billion out of Russia," the regulators said.

Two years prior, Deutsche Bank had already been fined a record $2.5 billion dollars bv US and British authorities for its role in an interest rate scam between 2003 and 2007.

The bank's London subsidiary pleaded guilty to counts of criminal wire fraud, after it was accused of fixing interest rates like the London Interbank Offered Rate (Libor), used to price a hefty amount of loans and contracts across the world.

British banking authorities said at least 29 Deutsche Bank employees were involved in the scam, while US regulators ordered the bank to fire seven employees, including directors and vice-presidents.

UK regulator Georgina Philippou said at the time: "This case stands out for the seriousness and duration of the breaches by Deutsche Bank – something reflected in the size of today's fine."

3. Violation of US economic sanctions

Same year, more money: after the Libor scandal fines, Deutsche Bank agreed to a hefty batch settlement with the US financial authorities. This time, it was for violating US sanctions against a number of countries, including Iran, Syria, Libya and Sudan.

The bank was accused of conducting clearing transactions for its customers, also using "non-transparent methods and practices" to disguise its actions. These transactions, which were carried out between 1999 and 2006, were not allowed under US laws that banned business transactions with countries accused of financing terrorism.

Deutsche Bank employees had devised strategies to get around the sanctions and carry out transactions worth roughly $10.9 billion. The bank agreed to pay $258 million in settlements.

4. Sale of toxic securities leading up to the financial crisis

Deutsche Bank was one of a series of lenders guilty of selling and pooling toxic financial products in the lead-up to the 2007 and 2008 financial crisis.

The bank signed a $7.2 billion settlement with the US Department of Justice in 2017, after being accused of having sold investors bad mortgage-backed securities between 2005 and 2007.

US Attorney General Loretta Lynch said at the time that "Deutsche Bank did not merely mislead investors: it contributed to an international financial crisis."

5. Spying on its critics

In 2009, after an internal investigation, Deutsche Bank admitted it had hired a detective agency to spy on people who were considered threatening for the bank – including a shareholder, a journalist, and a member of the public.

German prosecutors found no evidence of criminal wrongdoing, and the bank's top-level executives were deemed not to have been involved in the scandal.

After the results were disclosed, Deutsche Bank dismissed the employees who it thought were involved with the spying, including its head of corporate security for Germany and the global head of investor relations.