Authorities in the German state of Hesse are considering whether the nation's largest bank, Deutsche Bank, should face criminal charges for allegedly hiring detectives to spy on two top managers and a key shareholder. 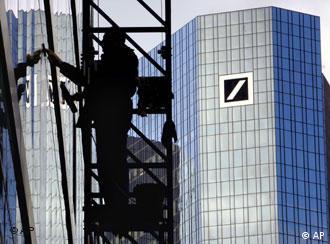 State prosecutors in Frankfurt have confirmed they are examining evidence handed to them by the German data protection office. The large volume of information gathered means it could take them two or three weeks to decide whether they should launch formal proceedings against the bank or its senior management.

The Wall Street Journal has reported that the review focuses on four separate spying incidents that occurred between 2001 and 2007.

One case involved the surveillance of Gerald Herrmann, a former union leader and supervisory board member, who was suspected of leaking sensitive company information to the media. Deutsche Bank admitted to spying on Hermann earlier this month and has since apologized.

Other alleged targets are reported to include Deutsche Bank's chief operating officer Hermann-Josef Lamberti, and Michael Bohndorf, an activist shareholder who has been highly critical of the bank. 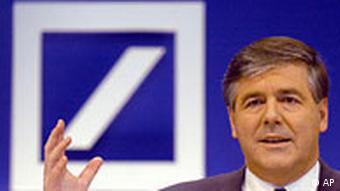 Ackermann has vowed to clear the air at Deutsche bank

The Wall Street Journal reports that detectives hired by Deutsche Bank were instructed to test Lamberti's security consciousness by trying to plant a GPS tracking device in his car and sending a bouquet of flowers containing an inactive microphone to his home.

Meanwhile, Bohndorf has told Germany's Der Spiegel magazine that private investigators posed as vacationers and spied on his home on the Spanish island of Ibiza after he asked a number of provocative questions at a Deutsche Bank shareholders' meeting in 2006. He said detectives tried to determine if he had a weakness for women by setting up a "honey trap" operation that involved a chance meeting with an attractive 23-year-old Brazilian woman.

Deutsche Bank has so far declined to comment on the details of the surveillance scandal, saying it was waiting for the final results of an internal probe launched by an independent law firm in May.

Chief executive Josef Ackermann has pledged to take a "zero tolerance" line against any illegal operations, but critics have said his resolve is likely to be tested by evidence implicating the chairman of the bank's supervisory board, Clemens Borsig. As the company's chief financial officer between 2001 and 2006, Borsig also led the corporate security department that is now at the center of the spying allegations.

The Handelsblatt business daily says the bank's national head of corporate security, Rafael Schenz, and its head of investor relations, Wolfram Schmitt, have been dismissed over their involvement in the incidents. Deutsche Bank itself, however, has refused to confirm their departures.

"We will comment on the results of the investigation launched by the bank and any subsequent staff and organizational changes once the final report on the investigation is concluded, and continue to cooperate with the authorities whom we informed about the matter," a Deutsche Bank spokesman said.

The scandal at Deutsche bank follows a host of other corporate spying incidents in Germany, including one at the telecommunications giant Deutsche Telekom and the discount retail chain Lidl.

Germany's national rail operator, Deutsche Bahn, was also caught in a data protection scandal earlier this year. Chief executive Hartmut Mehdorn was forced to stand down after his company was found to have systematically collected staff members' personal and banking information in an effort to weed out corruption in its supply chain.

Authorities have taken a suspect into custody on charges of fraud, embezzlement and authorizing payments for business that violates company policy in connection with a surveillance scandal at Deutsche Telekom. (18.12.2008)

The German discount supermarket chain Lidl has fired the head of its domestic food operations amid accusations of spying and data abuse. (06.04.2009)