The German bank has been fined over a "mirror trading" scheme that moved billions out of Russia between 2011 and 2015. The US Department of Justice has said it is also investigating the matter. 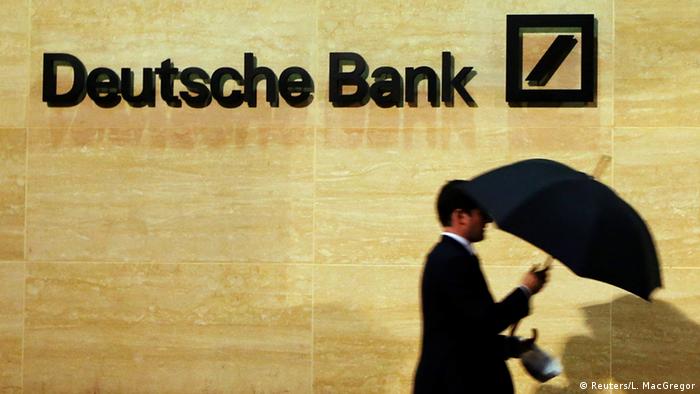 New York authorities announced the fine on Monday. It's reported Britain's financial regulator is also about to penalize the bank roughly $200 million (186 million euros) over the same scheme.

The scheme allowed Germany's banking giant to move some $10 billion out of Russia by using so-called "mirror trades" among its Moscow, London and New York offices.

As part of the scheme, clients reportedly bought stocks in rubles in Moscow and sold them off shortly after at the same price through the bank's London branch.

According to New York regulators, Russian blue chip stock trades, typically valued at between $2 million to $3 million per order, were then cleared through the bank's New York operations, with the sellers paid in US dollars.

Germany's biggest lender, Deutsche Bank, has agreed to pay a fine of close to a hundred million dollars to settle a fraud case in connection with the bank's use of a US shell company to avoid paying taxes. (05.01.2017)

"By converting rubles into dollars through security trades that had no discernible economic purpose, the scheme was a means for bad actors within a financial institution to achieve improper ends while evading compliance with applicable laws," according to the legal document detailing the settlement with New York's Department of Financial Services.

The US Justice Department is also investigating the matter.

The fines are the just the latest in a string of woes for Germany's biggest lender. Just two weeks ago, Deutsche finalized a major $7.2 billion settlement with the Justice Department for its role in the 2008 financial crisis. A probe found that the bank had misled investors in selling mortgage-backed securities.

New York regulators said Monday they had found that Deutsche was conducting its business in an unsafe manner in violation of state law. DFS superintendent Maria Vullo said the bank's deficient anti-money laundering controls meant it failed to detect and stop the "mirror trading" scheme for years.

"This Russian mirror-trading scheme occurred while the bank was on clear notice of serious and widespread compliance issues dating back a decade," Vullo said in the statement.

According to a consent order between the New York regulator and the bank, Deutsche said that, while "it has been unable to identify the actual purpose behind this scheme… It is obvious, though, that the scheme could have facilitated capital flight, tax evasion or other potentially illegal objectives."

Next to the penalty, Deutsche will also be required to retain an independent monitor to review its internal compliance measures.

Source reportedly told news agency Reuters that the bank has set aside some $1.1 billion in provisions for the Russia case.

It is due to report its fourth quarter financial results on Thursday.