According to Afghan officials, at least 90 people were killed and as many as 400 wounded when a massive truck bomb ripped through the Afghan capital on Wednesday. However, they warn that the death toll is likely to rise, given the severity of many of the injuries.

Witnesses reported an enormous plume of smoke rising up from Kabul's diplomatic quarter, home to the city's foreign embassies and the presidential palace. 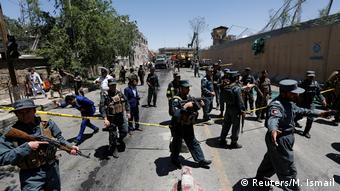 "The truck with which the suicide bomber carried out the attack is the one used for collecting sewage water," Saif told DW. "Most of the victims are well-to-do Afghans with jobs at foreign embassies and government offices. The attack site is in the downtown which is considered a safe place and people also go there for dining and shopping. The fact that such a place could be targeted has made the residents of Kabul very pessimistic about their security."

"I don't feel safe. I am always frightened. Nobody feels safe in Kabul," Zaman said.

Nicole Birtsch, an Afghanistan researcher at the Berlin-based think tank German Institute for International and Security Affairs (SWP), told DW that the security situation in Afghanistan had deteriorated further.

"Afghan security forces control only about 57 percent of the country's territory. Around 2.5 million people live in areas controlled by the Taliban and nine million more live in contested areas," Birtsch said.

"The number of civilian victims, including many children, remains high. And many people are internally displaced due to the fighting between government forces and the Taliban," she added.

An Afghan security guard was killed outside the German embassy while an unspecified number of embassy staff were wounded. The embassy building has also been badly damaged.

The German Embassy in Kabul praised the Afghan security forces for stopping the bomber's truck from entering the inner part of the diplomatic enclave. "Our thoughts and prayers are with the many victims of this horrific attack and their families. This includes the heroic Afghan security guard who lost his life after stopping the vehicle at the boom gate, thus preventing even more bloodshed," the Germany Embassy said in a statement.

Terrorism "targets all of us - whether in Manchester or Berlin, Paris, Istanbul, St. Petersburg or today in Kabul," Merkel said in the southern German city of Nuremberg just hours after the explosion in Kabul.

Germany's foreign minister, Sigmar Gabriel, wrote on Twitter that he had called an emergency meeting to discuss the situation in Kabul and the state of the German Embassy. "Such attacks do not change our resolve in continuing to support the Afghan government in the stabilization of the country," he said.

Afghan President Ashraf Ghani urged the international community to put pressure on those countries that are backing Islamist militants. "The terrorist groups have used the name of Islam to once again ruthlessly kill people. They are committing war crimes and have no idea about what Islamic teachings are," Ghani said in a statement.

Ghani and his government officials blame Pakistan for providing military and logistical support to militant groups like the Taliban and the Haqqani Network.

The Afghan Taliban issued a statement denying any involvement in the suicide attack. Zabiullah Mujahid, a spokesman for the Taliban, said whoever "carried out this attack and for what purpose, that will become clear at a later stage."

The Taliban "condemn every explosion and attack carried out against civilians, or in which civilians are harmed," the statement said.

Despite Taliban's claims that they are waging a war against the Afghan government and foreign forces, most of the casualties of their attacks have been civilians.

Read: Why are the Afghans wary of Pakistan?

Back in Berlin, a German government source told the dpa news agency that it had canceled the planned deportation of failed Afghan asylum-seekers back to Kabul that had been scheduled for Wednesday.

Despite Afghanistan not being on Germany's official list of "safe countries of origin," the federal government has nevertheless been pushing for speedier repatriations of failed asylum seekers following last December's Berlin terror attack. The federal government has repeatedly said that "some parts" of the country are now safe and therefore suitable for Afghan returnees, but it has been far more elusive on the question of which areas. Several state governments are openly challenging this position, saying none of Afghanistan can yet be classified as safe.

Between December and April, more than 100 Afghan nationals have been deported from Germany back to Kabul, prompting protests and stern political opposition.

Kabul has in recent months sustained a series of terror attacks carried out by a resurgent Taliban, as well as the so-called "Islamic State" (IS) jihadi group. However, Wednesday’s blast is reported to have been particularly devastating, striking buildings and cars within a one-kilometer radius.

The US and British embassies are also located close to Kabul's Zanbaq Square, where the explosion took place, as are the headquarters of NATO's mission in Afghanistan.

France's minister for European and foreign affairs, Marielle de Sarnez, said that the French Embassy in Kabul had been damaged in the blast, although she added that there were no reports of any French victims.

India's foreign minister, Sushma Swaraj, tweeted that all staff at the nearby Indian embassy had been reported safe.

"Our embassy is working with our Afghan and coalition partners to provide assistance to the personnel and affected embassies and we will work closely with the national unity government to help them bring the perpetrators of this attack to justice," a White House spokesman said.

A US State Department official told the Associated Press on condition of anonymity that the Wednesday bombing killed nine Afghan security guards and injured 11 American contractors at the US Embassy in Kabul.

UN Secretary-General Antonio Guterres expressed his "disgust" at the Wednesday bombing, his spokesman told journalists in New York. Guterres said the fight against terrorism and extremism needs to be strengthened, adding that those responsible for killing and wounding people in Kabul should be held accountable.

Wednesday's blast was the latest in a long line of attacks on the Afghan capital. Earlier in May, eight foreign soldiers were killed in a bomb attack claimed by IS.

Last month, the Taliban announced that it was launching its "spring offensive," vowing to step up its assaults on local and international military forces, as well as build up its political base in Afghanistan.

US Secretary of Defense James Mattis has warned that troops stationed in Afghanistan will face "another tough year" in the fight against radical insurgent forces. The US currently deploys some 8,000 soldiers in the country, while there are an additional 5,000 from NATO allies.

US President Donald Trump is soon expected to decide whether to bolster US troop numbers by an additional 3,000 to 5,000, expanding the total US deployment to over 10,000 - a major operation but still a far cry from the 100,000 American troops posted in Afghanistan six years ago.

Pakistan's military claims it has killed more than 50 Afghan troops along the border. While border clashes between the two countries are not a new occurrence, experts say this time the situation is more "warlike." (07.05.2017)