Mazar-i-Sharif is considered one of Afghanistan's safest cities. But the Taliban attack on a German consulate there has shocked locals. Severe damage to the area means the consulate will remain closed for several months. 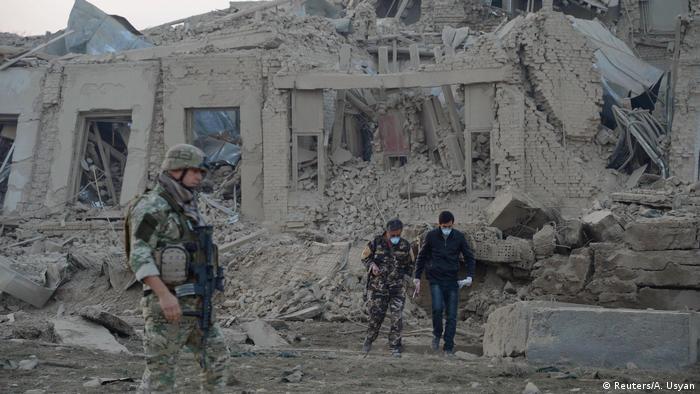 On the morning after the Thursday night Taliban attack on the German consulate in Mazar-i-Sharif, locals were still trying to recover from the shock. The consulate building, severely damaged from the bombing, and the shattered windows of nearby houses were witnesses to the ferocity of the assault, which claimed the lives of four people and left 128 wounded.

The number of casualties could have been much higher had the militants attacked the consulate during the day, when the area is usually crowded with people.

Accelerating desertions and diminishing morale among Afghan government troops add to security woes as the Taliban gain ground across the country. Observers censure the government for the poor state of affairs. (27.10.2016)

"Fortunately, no harm was done to the consulate staff," he said. "With the help of foreign troops, we managed to control the situation and rescued the consulate employees from inside the building."

The severe damage to the area around the consulate means it will remain closed for several months.

The Taliban said in a statement Friday that their attack was a response to this month's US airstrikes in the volatile province of Kunduz that left 32 civilians dead. They claimed that Germany's security forces had played a role in the raid.

"We heard a loud explosion around 11 p.m. after which the lights went off," said Mohsen, who was hurt in the assault. "The broken glass from the window injured my head and I lost consciousness. I don't remember what happened afterwards."

Mazar-i-Sharif is a quiet town in Afghanistan's north. The city hasn't been attacked by militants as much as other major Afghan cities. The explosion shocked the locals, who fear it might be the beginning of more Taliban assaults on their city. Taher, a Mazar-i-Sharif resident, says he hadn't experienced any similar incident over the past several years. He lives only a hundred meters away from the German consulate compound.

"The explosion woke me up from my sleep. My first reaction was that it might be a suicide bombing. Prior to the consulate attack, people here had been pretty satisfied with the security situation. That's why it is even more distressing that this attack happened in our city," Taher said, adding that the people are now very scared and anxious.

German Foreign Minister Frank-Walter Steinmeier convened a crisis meeting in Berlin after learning about the attack.

The assault on the German consulate proves that the security situation in Afghanistan is rapidly deteriorating. It also comes at a time when Germany is preparing to send Afghan asylum seekers back to cities it considers safe, and Mazar-i-Sharif is one of them.

Experts say the apparently first direct attack by the Taliban on foreign diplomats might force the German government to revisit their strategy in Afghanistan.