Accelerating desertions and diminishing morale among Afghan government troops add to security woes as the Taliban gain ground across the country. Observers censure the government for the poor state of affairs. 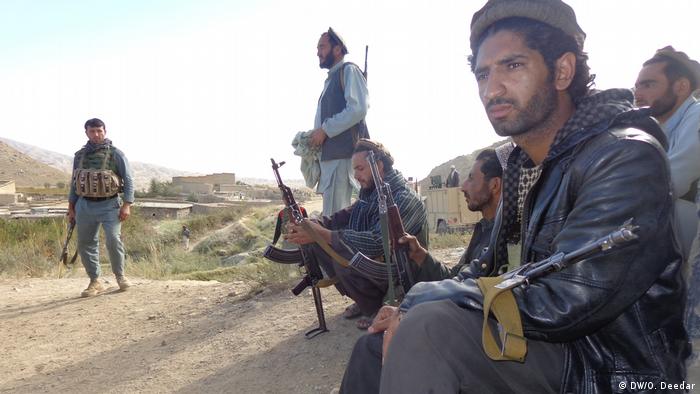 Numbering around 350,000, Afghan government forces have borne the primary responsibility for providing security across the conflict-ridden nation since the end of 2014. That was also the time when NATO's combat mission concluded, leaving its follow-up mission "Resolute Support" to merely observe, advise, and train the Afghan army.

But the foreign troops remaining in the country as part of the mission aren't mandated to assist Afghan forces on the frontlines, although NATO sometimes offers air support to local troops desperately trying to fend off advances by insurgent groups.

The millstone has put the Afghans under enormous pressure, resulting in mounting casualties, accelerating desertions and spiraling cases of government troops either surrendering to or joining the Taliban.

This has caused a jump in the attrition rate, retired general Atiqullah Amarkhail said.

"In countries like Afghanistan, which are involved in long wars, you don't want to train thousands of new recruits every month and send them to fight the enemy," Amarkhail stated.

It is very difficult to find out precisely how many members the Afghan security forces lose each month. But the Afghan army replaced about a third of its roughly 170,000 soldiers due to desertions, casualties and low re-enlistment rates in 2015 alone, according to figures released by the US military.

Such a high rate of replacement, Amarkhail said, drastically brings down the morale of the soldiers who are fighting on the frontlines.

"They see their friends dying, deserting or even joining the enemy, and they ask themselves why they should continue risking their lives," the retired general pointed out.

The impact of this poor morale can be witnessed on the ground, with government troops facing a series of setbacks in their fight against the insurgents in recent months.

For instance, in less than a year, Taliban fighters have twice overrun Kunduz city – located in the northern part of the country – before being pushed back with the help of international troops. At the same time, the insurgents are gaining ground across the country, particularly in provinces like Helmand and Nangarhar.

Some criticize the government forces for leaving their posts without even putting up a fight.

Many military experts say the security forces lack motives to fight the Taliban and other insurgent groups. This, General Amarkhail believes, is because they don't have a clear definition of the enemy.

Afghan troops have recaptured the northern city of Kunduz, but those who fled the fighting are still afraid to return to their homes. Most of them are living in nearby areas without basic facilities, waiting for help. (14.10.2016)

A year after Taliban fighters briefly overran Kunduz city, in a major blow to the morale of Afghan security forces, the insurgents continue to pose a major challenge to government troops in the region. DW examines. (21.09.2016)

Under pressure in Iraq and Syria, is 'Islamic State' turning to Afghanistan?

Kabul claims that suspected "Islamic State" militants have killed over 30 civilians in the western Ghor province. Experts say the setbacks in Iraq and Syria could be a reason behind the group's focus on Afghanistan. (26.10.2016)

"Soldiers need to have a very clear picture of their enemy. This picture should be given to them during long training sessions and even in schools," he said, stressing that such was not the case in Afghanistan.

"Afghan soldiers usually attend very short training sessions before they are sent to the battlefield," the analyst added.

On top of that, soldiers on the frontlines are confused by politicians who urge militants to join the peace process, experts say.

"You cannot confuse your soldiers. The orders given to them need to be very clear," Amarkhail said.

But it seems very difficult to achieve in Afghanistan, according to Kabul University lecturer Faiz Mohammad Zaland. That's because, he stressed, military and security institutions in Afghanistan have been politicized.

"In many cases, security institutions are loyal to certain people inside the government, not the government as a whole," Zaland said. Such forces, he added, will act to secure the interests of the person who they are loyal to, not the whole country.

Afghan President Ashraf Ghani has acknowledged the problem and has sought to address it. But he has failed because many key security institutions continue to be exploited for political gain, noted General Amarkhail.

The United States has spent around $65 billion on the Afghan security forces so far - mostly on training and equipping, but the force still remains under-equipped and faces serious management issues, resulting in enormous casualties.

"One of the principal factors for the high casualties has been the leadership, the failures of leadership at certain levels," US Army General John Nicholson was quoted by the AFP news agency as saying this month.

His concerns are echoed by soldiers on the frontlines. Every once in a while, a video of Afghan soldiers emerges on social media which shows them wounded, tired and frightened as they criticize their commanders for not sending reinforcements and support on time.

"If soldiers don't see their commanders by their side, if they are not supported when they need it and when their commanders are accused of corruption and neglect, they will not be able to do their job effectively," general Amarkhail said.

But it seems these problems will not be resolved anytime soon as the prolonged conflict has exhausted and over-stretched the Afghan security forces.