Gunfire and explosions have been heard at the largest military hospital in Afghanistan, located in the capital, Kabul. Officials said insurgents had entered the facility in the diplomatic district.

Armed insurgents on Wednesday attacked a military hospital in the diplomatic district of the Afghan capital, Kabul, with witnesses saying the militants had gone inside the building.

"The Sardar Daud Khan hospital has been attacked. The attackers have entered the hospital. We don't have any more details for now," Defense Ministry spokesman Daulat Waziri told AFP.

One member of the hospital staff posted on Facebook: "Attackers are inside the hospital. Pray for us."

One witness told Reuters news agency that he had seen one gunman dressed in a white doctor's coat who had opened fire with an AK-47, killing at least one patient and one hospital worker.

"This is a criminal act. Nothing can justify an attack on hospitals," said Afghan Chief Executive Abdullah Abdullah.

"We will never forgive these criminals. Unfortunately, this attack has resulted in some casualties. The attackers entered the back door disguised as doctors," he added. 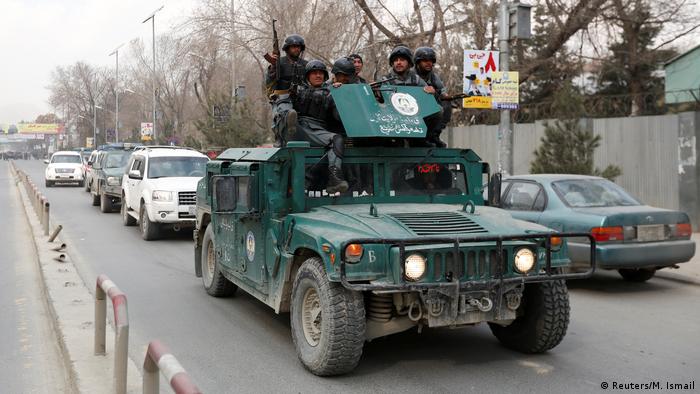 Local forces are struggling to rein in the Taliban

The hospital treats military casualties from around the country, which is embroiled in an insurgency waged by the Islamist Taliban - which has, however, denied responsibility for Wednesday's attack.

Instead, it has been claimed by the jihadi group "Islamic State" via a verified Telegram account.

The latest attack comes a week after 16 people were killed in coordinated attacks on a police station and an office of the intelligence service in Kabul. The attacks were claimed by the Taliban, which is ramping up attacks ahead of its annual spring offensive.

Insecurity is rising in Afghanistan as the insurgent group gains new momentum, with all attempts by the government to launch peace negotiations so far failing.

Pakistan has temporarily reopened its border with Afghanistan allowing thousands of stranded people to return home. But trade between the two nations has yet to resume and businesses are losing millions each day. (07.03.2017)