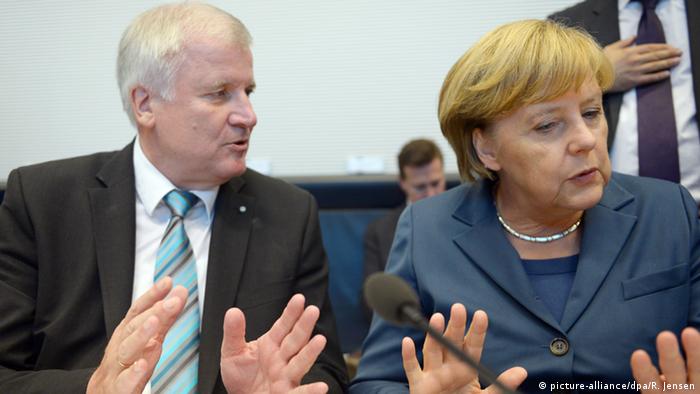 Söder said in Thursday's edition of the "Süddeutsche Zeitung" that the coalition between Merkel's Christian Democratic Union (CDU) and its Bavarian sister party, the Christian Social Union (CSU), is "in the most difficult situation since 1976."

The Bavarian Finance minister said the crisis related to the Union's core competencies of internal security and democracy.

Whoever believes it possible "to ignore generations of loyal voters" puts "the structural majority capability of the Union at risk," Söder warned.

It's almost 40 years since CSU MPs last decided to end the coalition with the CDU. The reasons stated at the time were to create a more effective opposition in the next election.

Within weeks, however, the vote by the CSU to separate was rescinded, after the CDU threatened to form local associations within Bavaria and to run against their former sister party in Bavarian elections.

Growing criticism from within the party

Merkel's refugee policy has come under increasing scrutiny from a number of CDU and CSU members in recent weeks.

Leading much of the criticism from the CDU's sister party is Bavarian State Premier Horst Seehofer (pictured above), who on numerous occasions has publicly urged Merkel to revise her refugee policy.

Seehofer believes the chancellor's policies are paving the way for the rise of the euroskeptic Alternative for Germany (AfD) and the xenophobic, right-wing PEGIDA groups, which have demonstrated almost weekly since last October.

Merkel has thus far refused to amend her refugee policy, however, insisting that Germany can take in large numbers of migrants in the years to come.

Seehofer is due to meet with Merkel and Vice Chancellor Sigmar Gabriel on Sunday to discuss the refugee crisis further.

German Interior Minister de Maiziere has announced a stricter refugee policy that would return most Afghan migrants. He also called for a swifter deportation of asylum seekers from the Balkans. (28.10.2015)

A proposed law from the German government would mandate banks to provide universal access to basic bank accounts. The law would particularly affect homeless people and refugees. (28.10.2015)