The Sudanese military has launched a coup attempt against the country's government — even though military officials were already part of that same government. It risks losing crucial international and local support. 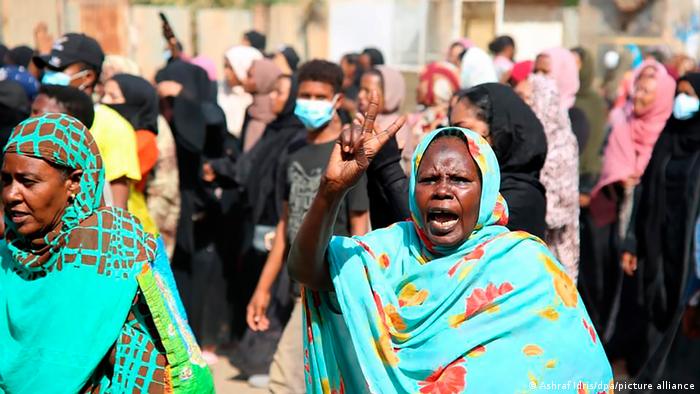 After the military said it was dissolving the government, pro-democracy protesters took to the streets

Early Monday morning, the Sudanese military appeared to launch a coup against the transitional government of the country. Prime Minister Abdalla Hamdok and his wife have been detained and held at an undisclosed location, according to the Information Ministry.

Reports from inside the country said Cabinet members of Sudan's transitional government have also been arrested.

Kholood Khair, managing director at Inside Strategy Partners, a think tank in the Sudanese capital, Khartoum, told DW that internet across the country has been cut and international flights to Khartoum were suspended.

News organizations, including the BBC, The Associated Press and Reuters, reported that civilians' movements were being restricted by soldiers as locals began to protest what they assumed was a coup.

One of the Cabinet ministers arrested was the minister of information, whose ministry oversees the state-run television station.

The army's actions come as part of a longer-running crisis, one that Prime Minister Hamdok previously described as Sudan's "worst and most dangerous crisis" since the removal of longtime dictator Omar al-Bashir in 2019.

What led to the coup attempt?

A week ago Sudan witnessed some of the biggest protests of the last two years, as thousands of locals in cities around the country took to the streets to voice their preference on who should lead the country.

Last Friday, the majority of protesters were out to voice opposition to the idea of military rule returning to the country. Earlier that week, other groups had demonstrated for exactly the opposite: They wanted the military to take over.

Now those supporting military rule, which had been holding a sit-in in front of government buildings in Khartoum, appear to have gotten what they wanted. At a sit-in outside government buildings in Khartoum, locals said they wanted the military to take over

"I think the army was put under more pressure than they expected during last week's counterprotests when demonstrators called for civilian rule," Theodore Murphy, director of the Africa program at the European Council on Foreign Relations, told DW. "Worried about being pushed out completely and being forced to face justice for some of their past crimes, the military acted this morning. I have no doubt that they were encouraged by some of the regional countries."

However, the situation is more complex because the Sudanese army was actually part of the government it just overthrew.

How did the power struggle begin?

Former Sudanese dictator Omar al-Bashir, an ex-army officer who ran the country for 30 years, came to power in a military coup himself. Al-Bashir overthrew a democratically elected government in 1989 and remained in power until he was removed from the position by the Sudanese military in 2019. This came after weeks of massive demonstrations. 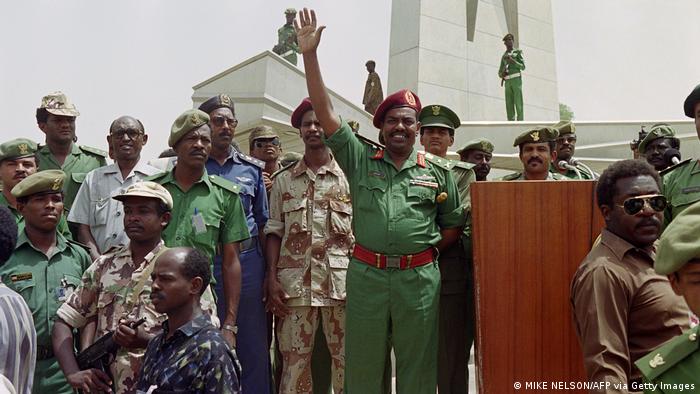 Initially, the military refused to give up power. But as popular protests continued they agreed to take part in a transitional government made up of both civilian forces, under the banner of the Forces for Freedom and Change (FFC), and army officers.

The transitional government was supposed to remain in charge until democratic elections could be held in 2023. But recently, there have been growing divisions within both the civilian and military sides, as well as increased competition between them.

The current crisis can be traced back to an alleged coup attempt by soldiers in September that failed.

Sudanese politics are incredibly complicated, said Dan Watson, a researcher at Sussex University in the UK, who has authored several Sudan analyses for the Armed Conflict Location and Event Data Project.

Despite the creation of the transitional government, the Sudanese military, which includes many former accomplices to the al-Bashir dictatorship, still held most of the power on the ground, Watson noted. 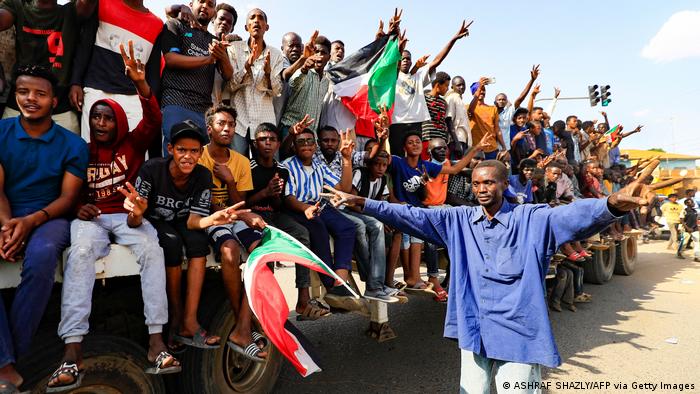 After the government signed a peace deal, it attracted international development aid back to Sudan

That is why many analysts believed that September's apparent failed coup attempt was "was either manufactured or used by the military," he added, suggesting it was used to stoke support among those who back the military.

Military leaders remain deeply enmeshed in the country's economic and political life and could have taken power at any time in the recent past "without facing any significant armed resistance," said Murphy, of the European Council on Foreign Relations.

"But what has prevented that up until now is the certainty they would face enormous resistance."

Many longtime Sudan analysts say the military had been looking for an excuse to sideline the required civilian representation within the transitional government, accusing the civilian leaders of ineptitude and corruption. 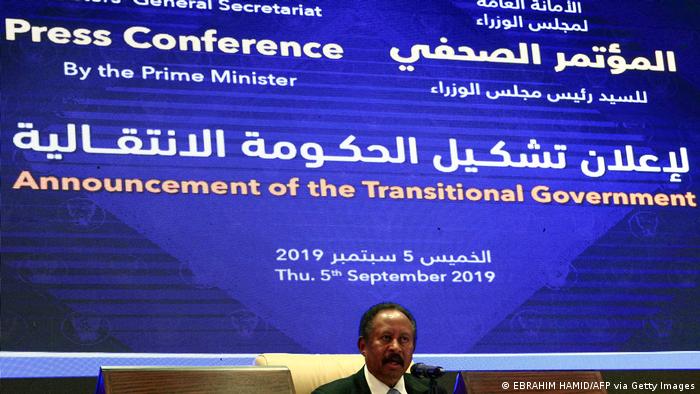 Sudan's transitional government has certainly faced challenges. Financial reforms have led to more economic pain and increased inflation. Over past weeks, a blockade by local tribes of Sudan's most important port in the east had caused shortages of essential goods. And, despite last year's peace agreement with rebel groups around the country, fatalities from political violence have actually increased over the past 12 months.

Additionally, there have been failures within the transitional government to agree on legislation, and a splinter group from the civilian FFC has broken away to side with the military bloc. This splinter group includes two former rebel factions and a political party that, Watson suspects, could be used to replace the existing civilian government. 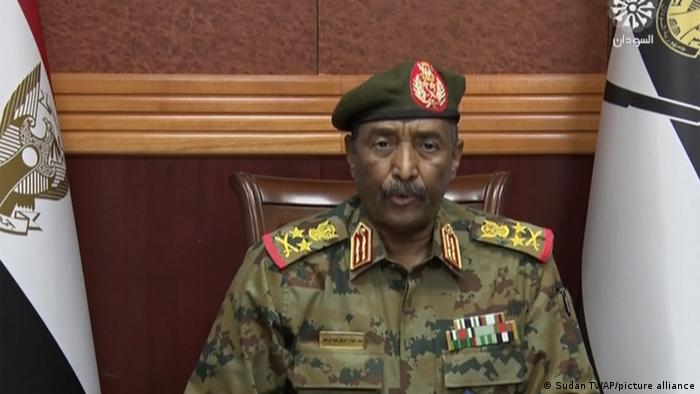 Abdel-Fattah Burhan, head of the Sudanese military, announced the army will run the country until elections can be held

Outside of urban centers, rural leaders who were previously part of al-Bashir's system of "mercenary patronage" see pro-democracy demonstrators' desire to change the system "as an assault on their constituencies," said Alex de Waal, a professor at Tufts University in Massachusetts and expert on Sudan. This has caused additional problems, such as the port blockade in eastern Sudan.

Military 'not fooling anyone'

"What the military would probably like to do is move [technocratic prime minister] Hamdok into a position where he stays in office, but where they pull the strings," de Waal said.

The message that the army wants to convey to the public is that this is not a coup — but rather a correction to Sudan's transition to democracy, Murphy said. Their focus is on replacing certain civilian politicians who they say were endangering the country and fomenting dissent within the military, he added.

The Facebook account of the Information Ministry, which still supports the transitional government, wrote that Hamdok had been asked to make a statement in support of the military takeover — but had apparently refused.

Reports coming out of Sudan suggest that the same network of protesters that previously demonstrated against the al-Bashir regime are now mobilizing to protest against what appears to be a military coup.

Several pro-democracy political groups and professional organizations had called on members to protest on the streets and start a general strike. A doctors' group said it was withdrawing staff from military hospitals.

There will also be blowback from the international community, which has said Sudan’s debt relief and international aid for the country are contingent upon an ongoing transition to democracy.

"Every previous Sudanese transition has ended with a military coup," said de Waal, who has authored more than a dozen books on Sudan's politics.

"The military are not fooling anyone, neither the domestic population nor the international community. Everyone is well aware of the games they are playing, and they will resist. In fact, they already are."

Data from ACLED and UN